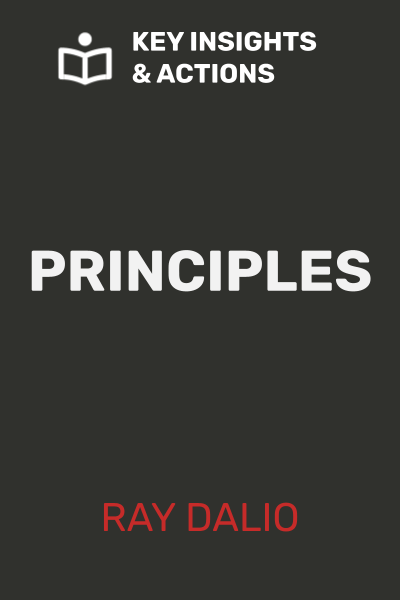 This book was written to explain all the principles that are used by Ray Dalio in his company, Bridgewater Associates. This is a truly remarkable book. It has so many great ideas that it’s difficult to embrace them all at once. We really love that a book with such a huge value has been written.

“I hope these principles will help you struggle well and get all the joy you can out of life.”

Things in our life happen over and over again, but our reaction is usually very random - it depends on our mood, current situation, state of mind, or even other people around us. Instead of improvising and making decisions spontaneously, we can use principles - rules that define what’s the best thing to do based on pure logic.

Ray Dalio collected the list of principles that helped him to solve problems faster and easier. These principles helped him to act logically, instead of emotionally. He was able to minimize the emotional impact of decisions because he defined beforehand how he would react in certain situations. Instead of improvising, he knew what to do, because he was focused on looking for patterns in the situations he experienced before, and defined what was the best way to act.

In order to act on principles, accept the reality is as it is. Wishful thinking might be very dangerous. Wishing that the reality could be better does not help you at all. Instead, embrace the reality and deal with it effectively.

The list of principles of Ray Dalio is long and very detailed. It’s not easy to go through it, and not easy to act on them. Start slowly, and add more as you go. It may take even 18 months to create the real habit of acting on these principles.

Think for yourself.
Life philosophy   220

Embrace reality and deal with it.
Life philosophy   97

Use the laws of nature and evolution to your advantage.
Life philosophy   60

Look at the machine from a higher level.
Problem-solving   39

Use this 5-step process to get what you want out of life.
Organization   41

Manage yourself and orchestrate others to get what you want.
Team management   23

For an organization to work effectively, everyone must be aligned with the most important things for that company. If the workers are aligned, they will work together harmoniously. If they don’t, if they have different goals, that will cause conflicts and confusion. As there are no rules, people will act more on emotions and their own interests instead of the interests of the whole company.

Work Principles of Ray Dalio aren’t vague slogans. They are concrete and everyone can understand them in order to act on them.

Ray Dalio believes that the company is most effective if everyone follows Idea Meritocracy. This consists of three elements: radical truth, radical transparency, and believability-weighted decision making. The first 2 are easily understandable, you will find more information about the in the principle “Trust in radical truth and radical transparency”. In order to understand the third one, please check the principle below: “Believability weight your decision making.”

Make your passion and your work one and the same.
Purpose (work)   45

Create a culture in which it is okay to make mistakes and unacceptable not to learn from them.
Team leadership   10

Get and stay in sync.
Workplace communication   7

Take full responsibility for meetings that you run.
Self-management   12

Remember that the who is more important than the what.
Team management   11

Hire right, because the penalties for hiring wrong are huge.
Hiring   13

Look down on your machine (your organization) and yourself within it from a higher level.
Organization   6

Your approach should have only two purposes.
Company organization   8

Know what your people are like and what makes them tick.
Team management   4

Think like an owner, and expect the people you work with to do the same.
Life philosophy   4

Hold yourself and your people accountable and appreciate them for holding you accountable.
Self-management   6

Diagnose problems to get at their root causes.
Problem-solving   5

Design improvements to your machine to get around your problems.
Organization   9

Do what you set out to do.
Organization   4