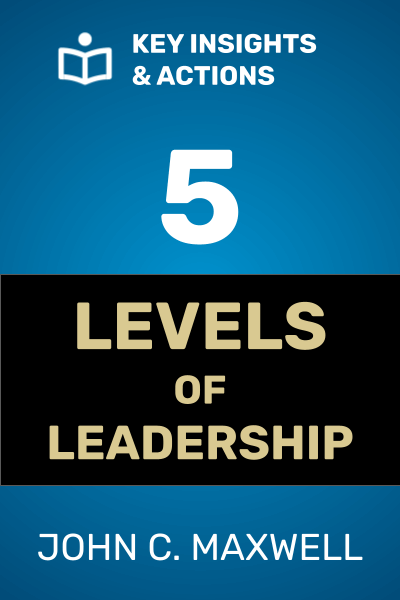 The 5 Levels of Leadership: Proven Steps to Maximize Your Potential

Did you ever consider what it takes to be a great leader? What is required to improve your leadership skills and become like Jack Welch from General Electric? It is possible to become a leader due to a situation. In this case, you are likely on level 1—the Position Leader. People follow you because they have to. It's a good place to start; however, it’s not where you want to stay.

This book provides a complete formula to become a leader that everyone wants to follow. A leader that is well recognized and very respected among other organizations.

You can have a leadership game plan for your life

“Leadership is much less about what you do and much more about who you are.” - Frances Hesselbein

The first and most important thing to know about leadership is that it’s not a position. It’s a process. Being a manager is a position; leadership is different—it’s the relationship between people. The challenge of leadership is to create change and facilitate growth.

Overview of the 5 Levels of Leadership

There are 5 levels of leadership, and each level is very distinct from the others:

Here are some important things to know about these 5 levels:

“It’s a great place to visit, but you wouldn’t want to live there”

Position leaders are leaders because of their situation. People follow you because they have to, not because they want to. Everyone who has been nominated as a leader of a team is here. If you become a leader, it’s because you have the potential. But it doesn’t mean that people will follow you and you will stay there.

Even though leaders on level 1 are nominated, there are a bunch of things that you can do to strengthen your position and prepare for the next level.

Leadership is about influence, and you cannot truly influence people if you depend on your position. That’s why moving to level 2, permission, is the first step to becoming a real leader.

Level 2 leaders make the workplace more enjoyable. This is because they are more focused on people instead of themselves. They move from “me” to “we”. It’s a mistake to only care about your position and your career advancement. Good leaders want other people on the team to succeed.

Leadership permission increases the energy level within the team because people like to spend time with each other.

Leadership permission opens up channels for communication. Instead of having a top-down relationship, you have a side-by-side relationship.

Connect with yourself before trying to connect with others.
Leadership   13

Become the chief encourager for your team.
Leadership   1

Strike a balance between Care and Candor.
Leadership   3

Leaders on level 3 are those who produce results for the organization. They are productive individually, and they also help the team to produce. Productive leaders attract other productive people. They have respect for each other and help the organization to grow.

High production leaders set the standard for others visually. They deliver results. They lead by example.

Level 3 leaders communicate the vision of the company through action. People see goals being met and get a clearer picture of what it means to fulfill the vision.

Production leaders don’t leave solving problems for someone else. They are active in breaking through the obstacles, putting out fires, correcting mistakes, and directing people.

And finally, production leaders create momentum. Without momentum, everything is harder to do than it seems. Momentum helps leaders to do things more easily.

Discover how your potential giftedness contributes to the vision.
Leadership

Define the vision for what needs to be accomplished.
Leadership   1

Begin to develop your people into a team.
Leadership   1

Use momentum to solve problems.
Leadership   2

Climbing through each level of the 5 levels of leadership requires a paradigm shift. On each level, there is a different way of thinking as a leader.

On level 4, you should put more emphasis on the development of people (not neglecting other levels). You must transition from the producer to the developer. You must invest your time, energy, money and thinking into growing others as leaders.

Leaders on level 4 shift their focus from production achieved by others to the development of their potential. They are no longer focused so much on productivity but on the personal development of other leaders.

Only leaders can develop other people to become leaders. People who have no experience in leadership, cannot develop leaders.

Help others do their job well.
Leadership

Teach your people to excel in life.
Leadership   3

Evaluate how independently your people can take action.
Leadership   3

“The highest leadership accomplishment is developing other leaders to level 4.”

Pinnacle leaders are the leaders who develop other leaders to level 4. It’s the highest level, and they are a real asset to their company. Reaching level 5 requires mastering the four levels that come before, and also some natural leadership skills.

Make room for others at the top.
Leadership

Create an inner circle that will keep you grounded.
Leadership

Do things in the organization that only level 5 leaders can do.
Leadership

Leave a successor who can go beyond you.
Leadership