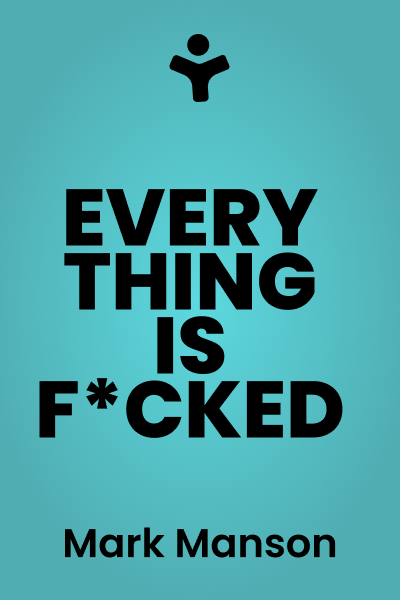 Everything is F*cked: A Book About Hope

The author explains how and why we generate hope and how it is changed and maintained throughout life. To get to a better understanding, he uses the theories of the greatest philosophers, sociologists, and even physicists, applying them to the world of values and pain.

The second part of the book is an attempt to understand what life without hope might look like. It is an honest look at the modern world and everything that is wrong with it, which makes us feel that everything is f*cked.

In the origin of hope lies the constant avoidance of the Uncomfortable Truth of Life—beyond a small group of people for an extremely brief period of time, little of what you say or do will ever matter.

We can’t accept that all we care about means nothing. Our psyche needs hope to survive. If nothing matters, why do anything at all? Something needs to matter to give life meaning. So we believe we’re here for a reason, that it’s worthy to help at least one person. The imagined sense of importance gives us hope and a purpose to live.

And yet, an irrational sense of hopelessness is spreading across the developed world. This is the Paradox of Progress. We are the safest and the most prosperous humans in the history of the world, yet we’re feeling more hopeless than ever before and report low levels of life satisfaction. We already have all the material goods we could want, but regardless, we are desperate for things to get better.

Self-control is an illusion

“While the Thinking Brain rests within the synaptic circuits in your skull, the Feeling Brain is the wisdom and stupidity of the entire body.”

To generate hope, the first thing that we need is to feel as though we have control over our lives. Yet, many of us struggle with the inability to control ourselves. Usually, when we fail to do the things we should, we assume it’s because we can’t sufficiently control our emotions. We think we’re too undisciplined or we lack knowledge.

This is the Classic Assumption—the belief that logic and facts dominate feelings.

Neither brain communicates well, but both participate in decision-making by “drive[ing] the Consciousness car.” The Feeling Brain is the real driver; it decides where to go. We are moved to action only by emotion. The Thinking Brain can only navigate and slightly modify the route.

Negotiate with the Feeling Brain in a language it understands.
Emotional intelligence   2

Consistently communicate and align the brains around the same values.
Self control   5

The second thing needed to sustain hope is a belief in the value of something. This is the prism through which we observe the world and judge every single event.

In a parallel universe, Newton’s studies didn’t try to predict and control the natural. Instead, they tried to control the internal, emotional world. Instead of creating theories regarding physical bodies, he makes universal statements that explain our hopes, pain, and values. He studies how they formed, are maintained, and change through life.

These are physical theories applied to the spiritual world.

Newton’s First Law of Emotion: For every action, there is an equal and opposite emotional reaction.
Emotional intelligence   6

Newton’s Second Law of Emotion: Our self-worth equals the sum of our emotions over time.
Life philosophy   2

Newton’s Third Law of Emotion: Your identity will stay your identity until a new experience acts against it.
Growth   4

The emotional gravity is the fundamental organization of all human conflicts and endeavors.
Emotional intelligence   2

How to make all your dreams come true

“Paradoxically, it’s only in a group environment where the individual has no control, that he gains the perception of perfect self-control.”

The third component of having sustainable hope is a community. Religions are the basis of communal hope. There are three types of religion depending on the core value: spiritual (Christianity, Judaism, Islam), ideological (capitalism, liberalism, communism, fascism), and interpersonal (romantic love, children, sports heroes, political heroes, celebrities).

When you get enough people with the same values together, they behave in ways they never would when alone. The social validation of being part of the group hijacks the Thinking Brain and makes people do highly impulsive and irrational things.

Religion brings groups of people together to mutually validate one another, making them feel important. It puts the Uncomfortable Truth away, that you and I and everyone we know will die, and little to nothing of what we do will ever matter on a cosmic scale. Psychologically, this is hugely satisfying.

Religions can be built from scratch. There’s a six-step mechanism that aims for people’s value hierarchy and makes them adopt ideas that maintain the feeling of hope.

Create your own religion.
Life philosophy   5

There are two points of view on hope: hope as an antidote to all evil and hope as another form of evil. There are both healthy and damaging forms of hope.

Experiences generate emotions, emotions generate values, and values generate narratives of meaning. People who share similar narratives come together to generate religions. The conflicts between religions must exist because they maintain the meaning and purpose for people within the group.

The sources of hope that give our life a sense of meaning are also sources of division and hate. Therefore, hope is destructive. It depends on the rejection of what currently is. Hope requires us to be anti-something, to renounce a part of ourselves or the world.

Friedrich Nietzsche, one of the most influential thinkers of all time, believed that we must look beyond values, beyond good and evil. He claimed that future greatness in human beings had to begin with amor fati—a love of one’s fate—to want nothing to be different.

It is an unconditional acceptance of all life and experience: loving one’s pain and embracing suffering. You close the separation between your desires and reality by simply desiring reality.

Hope for nothing.
Happiness Mindset   1

The formula of humanity

Humans grow up by changing their values, causing them to see relationships, self-worth, and motivation differently.

As children, we value what gives us pleasure and helps us to avoid pain. In the adolescent approach to life, everything is a trade-off. We are ready to tolerate negative experiences if they bring us to a pleasurable end. This is, for example, the common adolescent thinking of, “...if I wear this, listen to this music, do this, people will like me.” Their lives are all about maximizing pleasure and minimizing pain.

As adults, we realize that the most important things in life can’t be achieved through bargaining. They are non-transactional. If you try to bargain for them, you destroy them (love, trust, respect, happiness).

Hope is fundamentally transactional. It is a bargain between your current actions and some imagined, pleasant future. Adults do what is right because it’s right, not because it’s pleasurable or helps to avoid pain. To take a step towards adulthood requires courage to abandon hope, to act unconditionally, and to let go of the desire for things to be better or more pleasant and fun.

The maturity of our culture is deteriorating. We are living through a crisis of character and virtue. To change the world positively is only possible if each individual achieves maturation and dignity in the present.

Pain is the universal constant

“While pain is inevitable, suffering is always a choice. There’s always a separation between what we experience and how we interpret this experience. In this gap you have power to bear anything.”

The better things get, the more we perceive threats where there are none. This is the basis of the paradox of progress.

Our emotional reactions to the problem aren’t determined by the size of the problem. Rather, our minds simply amplify or minimize problems to fit the degree of stress we expect to experience. Material success and security cause us to be preoccupied over less significant things.

Our tolerance for pain, as a culture, is diminishing rapidly. It generates emotional fragility, which is why everything appears to be so f*cked.

Pain is the universal constant of life.
Life philosophy   2

“If you’re trapped by insecurity, stymied by doubt, and hamstrung by intolerance, you can have all the variety in the world. But you are not free.”

Modern marketing is based on making people feel inadequate. It finds your pain points, makes you feel even worse, and then offers a solution. Every single day, thousands of advertising messages induce feelings of inadequacy.

Modern businesses give people what they want. All goods and services are aimed at avoiding pain. They make us weak, fragile, and obsessed with comfort and pleasure. We become unable to identify, tolerate, and seek out negative emotions. We constantly feel a need for external comfort and validation that may not ever come.

The abundance we have creates the paradox of choice. The more options we’re given, the more “freedom” we have, the less satisfied we are with whatever option we decide on. This is fake freedom—we just have more variety. Fake freedom is addictive. No matter how much you have, you always feel as though it’s not enough.

The only true form of freedom can be reached through self-limitation. This is the only thing you can choose by yourself.

Choose what you will give up in life.
Growth   1

“I believe artificial intelligence is Nietzsche’s ‘something greater’. It is the Final Religion, the religion that lies beyond good and evil, that will finally unite and bind us, for better or worse.”

Power emerges from the ability to manipulate and process information. We always worship whatever has power over us. Soon artificial intelligence will take over, as it will become better than humans at everything. We will stop comprehending its intelligence and start worshipping it. The old gods will be replaced by new gods—the algorithms.

We are algorithms. Consciousness is a vast network of algorithms based on values, knowledge, and hope. In the global world, they break down and enter us into ever-escalating cycles of conflict that can produce no permanent satisfaction. We’re about to produce algorithms that are exponentially better than we are.

To survive, we need to adapt technology to our flawed psychology, not exploit it. We need to create tools that promote greater character and maturity, rather than diverting from growth. We need to encourage antifragility and self-imposed limitations, rather than protecting everyone’s feelings.

Superintelligent machines will create some form of virtual reality that will consume us instead of killing each other. Maybe one day we will be integrated with the machines themselves. Individual consciousness will be subsumed; independent hopes will vanish. We will transcend the limitations of our value-based minds. We will not only realize but ultimately embrace the Uncomfortable Truth. We imagined our own importance, invented our own purpose, we were, and still are, nothing.