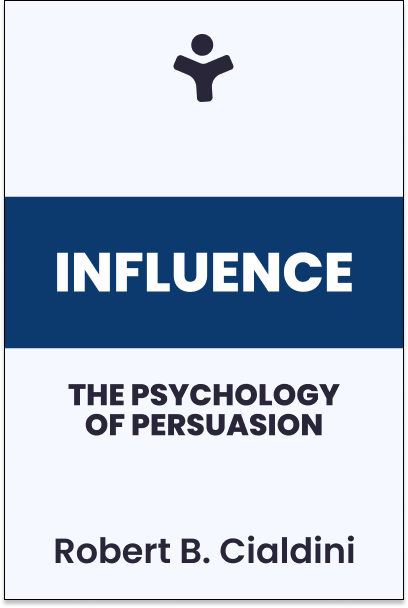 Influence: The Psychology of Persuasion

by Robert B. Cialdini

Did you know that in 2015, more than $180 billion were spent on marketing in the United States? But why? Because companies know that there is a hidden gold mine in the business of persuasion. Whether you’re a student, a professional, or an entrepreneur, persuasive skills will help you at some point in your life. You might use this knowledge to write the perfect scholarship essay, ask your boss for a raise, or negotiate a lucrative business deal. This book digs into people and dissects their decision-making process in a charming way.

Influence explains exactly what you need to do to persuade others and even YOURSELF—sometimes you just need to convince yourself that you can do something. You’ll learn the fundamentals of habits, creativity, mental toughness, confidence, and, of course, negotiations. This book gives you a tool to hack into your brain and reprogram it for success.

The best part about the habit ideas in this book is that you don’t need to spend money or even face fearful situations to implement them. The ideas are based on simple psychological tricks such as writing on paper to enforce commitment. However simple, the ideas listed form the foundation of marketing and persuasion in the real world.

“Automatic stereotyped behavior is prevalent in much of human action, because in many cases it is the most efficient form of behaving, and in other cases it is simply necessary.”

Much of animal behavior is programmed and can be triggered by certain stimuli in the environment around us. For example, a male robin will attack anything with red-breasted feathers, and a mother turkey will care for any animal that makes a “cheep-cheep” sound. Humans are no exception to this rule—we are more likely to comply with requests when given a reason to do so or purchase an item when it is more expensive.

This sort of programmed, stereotyped behavior is essential to functioning in the world. With so many stimuli around us, we need these shortcuts that enable us to automatically respond to specific scenarios. Otherwise, our brains would simply burst trying to process all the information we are given.

Another principle which dictates our behavior is known as the contrast principle, which posits that the perceived difference between two items will be greatly exaggerated if they are presented one after another. For example, there is increasing evidence suggesting that many people are unsatisfied with their partner’s looks due to the prevalence of unrealistically attractive models in the media.

When asking for a favor, give a reason for it.
Communication

Stay aware of the ways salespeople manipulate you into buying their products.
Sales

Reciprocation: The Old Give and Take… and Take

The rule of reciprocation describes a human phenomenon where we try to repay, in kind, what another person has given us. This rule is often used in marketing to manipulate someone into compliance. This is seen when salespeople provide prospective customers with a small favor before making their request.

For example, the Hare Krishnas, a religious sect, hand out small gifts such as a flower before asking for donations. People who are given a flower are more likely to donate, as described by the rule of reciprocation. Many of these people dislike the Hare Krishnas; however, when they are given a gift, they feel obligated to donate.

A key aspect of the rule of reciprocation is that the original favor must be uninitiated, i.e., the person carrying out the favor must do so out of their own free will. Otherwise, the feeling of obligation will not be triggered in the second individual.

Use the rule of reciprocation to influence people.
Communication

To win negotiations, use the reject-then-retreat strategy.
Negotiation

“When it occurs unthinkingly, consistency can be disastrous.”

All humans have the desire to be and appear consistent. Once we make a decision, we will feel an internal pressure to behave consistently with that decision. For example, once we place a bet on something, we will feel more confident about winning. This is because consistency is a trait that is valued, whereas inconsistency is seen as something negative.

This desire to be consistent can often cause us to do things we normally would not want to do. Sometimes, we even avoid facing the reality of a situation by subconsciously justifying our actions with this desire.

Trigger an individual’s desire to remain consistent to influence them into doing what you want.
Communication

Commit to your goals publicly.
Self-control   14

Don’t get manipulated into doing something you wouldn’t otherwise do.
Life philosophy   6

Social Proof: Truths Are Us

“Social proof is most powerful for those who feel unfamiliar or unsure in a specific situation and who, consequently, must look outside of themselves for evidence of how best to behave there.”

The principle of social proof states that we use what other people think is correct to determine what we think is correct. For example, laugh tracks on TV shows signal to us that we should laugh too. A half-full tip jar will influence us to leave a tip too. A product labeled “fastest-selling” will make us feel as if we should also purchase it.

This principle also explains the phenomenon of the bystander effect. When an emergency is happening in public, most people tend to look the other way as they believe someone else will do something about it—after all, they are in public with many other people around. When no one does anything, everyone feels as if they don’t have to do anything either. However, if a lot of people treat the situation as an emergency, nearly everyone around will see it as an emergency too.

To convince people about something, provide social proof.
Communication

Use the principle of social proof to overcome your phobias.
Growth

Do not fall prey to the bystander effect.
Communication

“In making a compliance decision, it is always a good idea to keep separate our feelings about the requester and the request.”

When we like someone and consider them a friend, we’re more likely to buy whatever they’re selling. There are a few factors which play a role in helping us decide whether we like someone or not, and physical attractiveness is one of them. When someone is good-looking, we are more likely to subconsciously assign positive traits such as talent, intelligence, etc. to them, and therefore, we end up liking them.

Another factor is similarity—the more similar a person is to you, whether in outward appearance (fashion sense) or inward appearance (personality), the more you will like them. Familiarity also plays a role; when someone’s face is more familiar to you, you are more likely to like them. Lastly, the associations you form with someone affects how you perceive them. For example, if you live somewhere that is sunny year-round, you will probably like your local weatherman as you associate him with sunny weather. This is known as the association principle.

Use the association principle to your advantage.
Communication

Learn how to say no.
Communication   10

“Whenever we are faced with so potent a motivator of human action, it is natural to expect that good reasons exist for the motivation.”

We are trained from birth to believe that obedience to proper authority is right and disobedience is wrong. This mindset is reinforced from childhood to adulthood—when we obey our parents or employers we get a reward, but when we disobey them we get punished. Obedience is often a subconscious reaction; we rarely have to think about it. However, sometimes, we do not obey the proper authority but rather those who are trying to trick us into believing that they are the proper authority.

When people carry a professional title such as “Doctor” or “Judge”, we are more likely to view them as proper authorities. Clothes such as military fatigues and priest robes can also carry the connotation of proper authority. Lastly, trappings such as expensive jewelry and luxury cars can serve the same purpose. Con artists often use a combination of these three things to trick others into believing in their authority.

Do not fall for con artists who try to trick you into believing in their authority.
Life philosophy   6

Scarcity: The Rule of The Few

“The idea of potential loss plays a large role in human decision making.”

Things become more appealing to us when their availability is limited. People are more motivated by the thought of losing something over the thought of gaining something—even when both are of equal value. This rule is often used by salespeople. When something is advertised as running out of stock fast, people will be more likely to purchase it. Another commonly used method is the deadline method; when a deadline to purchase an item is set, people will rush to buy it.

Do not buy into the scarcity principle.
Life philosophy   5