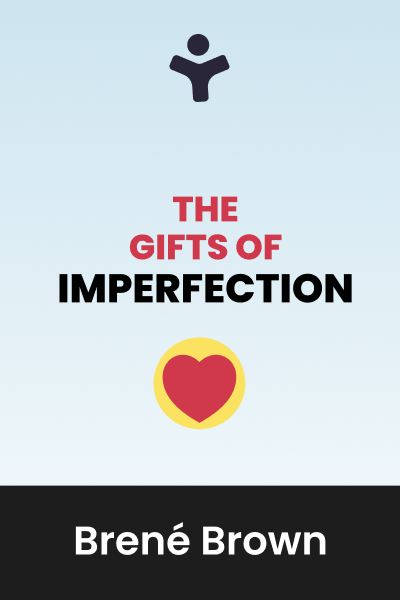 The Gifts of Imperfection: Let Go of Who You Think You're Supposed to Be and Embrace Who You Are

The Gifts of Imperfection isn’t a guidebook on how to achieve happiness; rather, it is a book about all the things that get in the way of true, lasting happiness, joy, and belonging. It explores the concepts of courage, compassion, and connection to understand the reasons behind perfectionism and insecurity. Most importantly, it promotes self-acceptance and self-love, and it will teach you how to be vulnerable and strong at the same time.

We have compiled all the advice in this book into a series of habits you can practice from the comfort of your own home! Pick one or two and start practicing them today—you’ll notice an immediate positive shift toward happiness.

When looking for compassion from others, choose the right people to connect with.
Socializing   12

Authenticity is the daily practice of letting go of who we think we’re supposed to be and embracing who we are. It means cultivating the courage to be imperfect and vulnerable, exercising the compassion that comes from knowing that we are all made of strength and struggle, and nurturing the sense of belonging that can only happen when we believe that we are enough.

Mindfully practicing authenticity during our most soul-searching struggles is how we invite grace, joy, and gratitude into our lives. It’s not an easy choice to make—it’s the hardest battle you will ever fight in your life—but it’s well worth it.

Cultivate creativity and meaning in your work.
Creative thinking