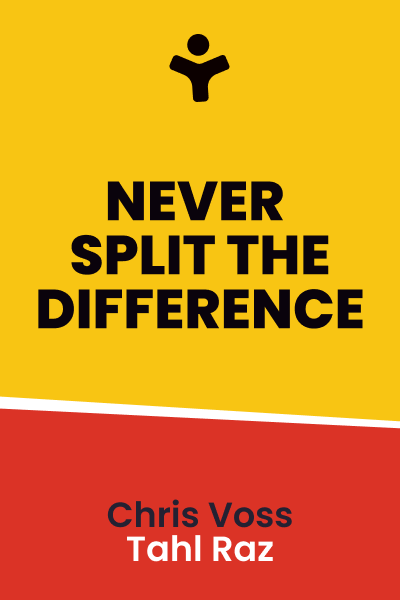 Never Split the Difference: Negotiating As If Your Life Depended On It

Chris Voss, the author, declares simply in the first few pages of his book, ”Life is negotiation.” Anytime an individual or party wants something from another, there is a process to make that happen. Getting your children to agree to a bedtime schedule or getting your friends to agree on a restaurant for dinner are examples of this process. Negotiation is an always present and necessary action. Chris Voss identifies nine key principles to make you a better negotiator in every aspect of your life.

“Humans suffer from cognitive bias… brain processes that literally distort the way we see the world.”

Old school negotiations focused on the idea of rational, logical problem solving to deal with the other side. They preached that the key to successful negotiation was separating the person and any emotion from the process. However, in the 1980s, psychologist, Daniel Kahneman, and economist, Amos Tversky, showed that these old school ideas are not really how humans work. Kahneman won a Nobel Prize for his research and established “new rules” for how we think and relate to others.

Man has two systems of thought. The first is fast, instinctive, and emotional. The second is slow, deliberate, and logical. The first mode of thought is far more influential and steers our rational thought.

“You should engage the process of negotiation with a mindset of discovery.”

The goal at the beginning of a negotiation is to observe and extract as much information as possible. One of the mistakes smart people make that prevents successful negotiation is that they are so intelligent they think they don’t have anything to discover. Be careful to note your assumptions and biases, and be open to all the possibilities that may be present. Mirroring is a technique to make the other person your sole focus.

Slow down during negotiations.
Negotiation

Use the proper tone of voice.
Negotiation

Mirror what someone has just said.
Negotiation

Don’t Feel Their Pain, Label It

“Instead of denying or ignoring emotions, good negotiators identify and influence them.”

Emotions aren’t obstacles, they are the means to effective negotiations. Empathy is paying attention to another human being, asking what they are feeling, and making a commitment to understand their world.

A good negotiator uses “tactical empathy” which is one step beyond empathy. It is understanding the feelings and mindset of another in the moment, and also determining what is behind those feelings, so you can increase your influence in all the moments that follow. Tactical empathy is bringing our attention to both the emotional obstacles and the potential pathways to securing an agreement. Labeling is a way of validating someone’s emotions by acknowledging them.

Do an accusation audit.
Negotiation

“‘No’ is the start of the negotiation, not the end of it.”

For good negotiators, “no” is pure gold. Change is scary, and “no” provides a little protection from that scariness. People will fight to the death to preserve their right to say “no.” Give your counterpart the right to say “no,” and the negotiating environment becomes more constructive and collaborative almost immediately. Train yourself to hear “no” as something other than rejection.

Asking for a “no.”
Negotiation

Trigger The Two Words That Immediately Transform Any Negotiation

“The sweetest two words in any negotiation are actually, ‘That’s right.’”

Creating unconditional positive regard opens the door to changing thoughts and behaviors. Humans come to expect love, praise, and approval. The more a person feels understood, and positively affirmed in that understanding, the more likely that urge for constructive behavior will take hold. “That’s right” is better than a “yes” from your counterpart. A “yes” is most often just appeasement or temporary compliance, a way to get the other person to go away. A “that’s right” response signals that there is genuine understanding, and your counterpart feels like they are being listened to and understood.

Trigger a “that’s right” response with a summary.
Negotiation

“No deal is better than a bad deal.”

The win-win mindset pushed by so many negotiation experts is usually ineffective and often disastrous. At best it satisfies neither side. And if you employ it with a counterpart who has a win-lose approach, you’re setting yourself up to be swindled. Compromise, “splitting the difference,” can lead to terrible outcomes. Creative solutions are almost always preceded by some degree of risk, annoyance, confusion, and conflict. And since most people in negotiation are driven by fear and the desire to avoid pain, they compromise.

Do not settle. The simple rule: Never split the difference. Accommodation and compromise never produce a creative solution. So embrace the hard stuff. That’s where the great deals are.

Make time your ally and set the deadline.
Negotiation

Create the Illusion of Control

“All negotiation, done well, should be an information-gathering process that vests your counterpart in an outcome that serves you.”

When people feel they are not in control, they adopt what psychologists call a hostage mentality. In moments of conflict, they react to their lack of power by either becoming extremely defensive or lashing out. One of the most powerful tools for rejection, or active resistance, is asking the other side for help. These questions are called “Calibrated Questions”, and they are a powerful technique for transforming confrontational negotiations into problem-solving sessions.

Negotiators have to be decision architects. They have to design the verbal and nonverbal elements to gain both consent AND execution. By making your counterpart articulate implementation in their own words, your carefully calibrated “how” questions will convince them that the final solution is their idea.

Use the “Rule of Three” to strengthen the agreement or commitment.
Negotiation

“Once you’re clear on what your bottom line is, you have to be willing to walk away. Never be needy for a deal.”

In any bargaining or tough negotiating session, the most vital principle to keep in mind is never to look at your counterpart as an enemy. When someone makes an offer that upsets you, take a deep breath and say, “I don’t see how that would ever work.” Or, “I’m sorry that just doesn’t work for me.”

In a difficult negotiation, you can use the Ackerman model as an offer-counteroffer method. It was developed by Mike Ackerman, an ex-CIA kidnap-for-ransom consultant. It can work in difficult bargaining situations.

Never look at your counterpart as an enemy.
Negotiation

In difficult negotiations, use the Ackerman Model.
Negotiation

“Enhanced receptivity to the ‘unknown unknowns’ can free the negotiator to see and hear the things that can produce dramatic breakthroughs.”

It is the person best able to unearth, adapt to, and exploit the unknowns in a negotiation that will come out on top. “Black Swans are events or pieces of knowledge that sit outside our regular expectations and cannot be predicted. This is a crucial concept in a negotiation.

Effective negotiators look for pieces of information, often subtly revealed, that show what is important to the counterpart. There is the visible negotiation, and then there are all the things hidden under the surface. Access to this hidden space often comes through understanding the otherside’s worldview, their reason for being, their ‘religion’...”

Negotiation breakthroughs are created by those who can identify and utilize Black Swans.