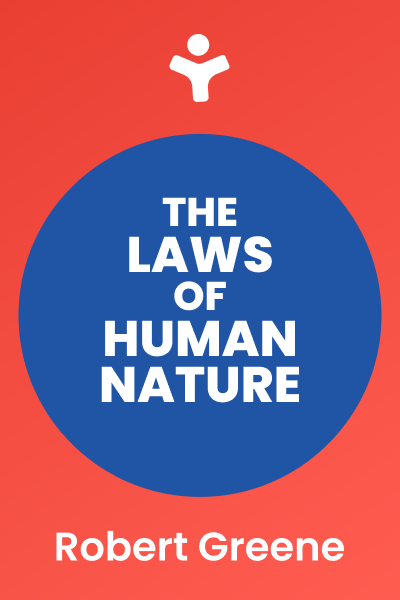 The Laws of Human Nature

In life, we’ll inevitably come across difficult people who make us feel frustrated, upset, confused, or helpless. How can you understand human behavior and make sense of others as well as your own emotions and actions?

Human nature, or rather, the way we act instinctively, comes from the way our brains are wired after millions of years of evolution. Through an extensive study of literature on psychology and philosophy, Robert Greene explains the “18 laws” of human nature to help us understand why humans behave the way we do. These insights will help you to become a better judge of character, manage your thought patterns, empathize with others, and motivate/influence them more effectively.

“If you come across any special trait of meanness or stupidity… you must be careful not to let it annoy or distress you, but to look upon it merely as an addition to your knowledge”

Humans act instinctively in certain ways because of how our brains are wired after millions of years of evolution. By understanding why people behave the way they do, you can become a better judge of character, manage your thought patterns, stay calm and strategic, and motivate or influence others more effectively.

Law of irrationality - Master Your Emotions

We humans think that we are in control, but what drives us are our emotions. We follow our emotional impulses to seek pleasure and avoid pain. We tend to feel an emotion before we interpret it consciously, as different parts of our brain control these two functions.

Become aware of your irrationality, then practice introspection and reflection to manage your emotions.

The common biases that distort your perception are:

The inflaming factors that can intensify emotions are:

We can empathize naturally when we are not self-absorbed. We need attention to grow our self-worth, but we can’t rely on it alone, or we become narcissists.

Deep narcissists take everything personally, demand control and attention in their relationships, and are expert manipulators.

Healthy narcissists direct their sensitivity to others through empathy or to their work through creativity.

Everyone wears a mask to present themselves to others. We want to look good, but our real feelings show up through (mostly unconscious) body language. Pay attention to non-verbal cues and don’t get lost in your own internal dialogue

Signs of dislike or displeasure include:

Signs that the other person likes you include:

People who are confident tend to be relaxed, move more freely, and make eye contact.

People who are hiding something tend to become extra-animated, unusually chatty, or forceful.

Law of shortsightedness - Think about the future

We tend to overemphasize what we see and hear in the present, especially what is the most dramatic. In doing so, we lose sight of the bigger picture.

In this complex world, any action can have far-reaching consequences. Learn to step back and consider the bigger picture instead of reacting to what’s in front of you.

Develop your rational self - recognize your biases and inflaming factors
Growth

“When choosing people to work and associate with, do not be mesmerized by their reputation or taken in by the surface image they try to project. Instead, train yourself to look deep within them and see their character.”

Our character is deeply ingrained and compels us to act in unconscious ways. Forged by 3 components

Learn to look beyond appearances. Assess people’s true character based on how they handle adversity, adapt, learn, and interact with others. This involves understanding our own character to address the negative patterns in our lives and becoming skilled at reading others.

Law of conformity - be aware of how we change in groups

We like to believe that we’re independent and progressive, but we can’t help conforming with our groups: we unconsciously imitate others and are influenced by their reactions and opinions.

Here’s how we are individually influenced by groups:

There are some common dynamics you may notice in groups:

Defend yourself from others

“Learn to deflect envy by drawing attention away from yourself. Develop your sense of self-worth from internal standards and not incessant comparisons.”

Law of envy - draw attention away from yourself

Humans constantly compare themselves with one another.

When we feel envious, we deny our envy as it implies inferiority. Instead, we tell ourselves that we’re just angry or indignant.

Envious people can turn hostile and actively seek to hurt you, whether consciously or unconsciously. This is the most common and painful betrayal among friends.

Signs of envy include:

The personality types of enviers are:

Situations that often trigger active envy in others include:

On the surface, people seem friendly and civilized. However, beneath the mask, everyone has an aggressive side.

The most chronic aggressors are actually people with the deepest insecurities. They can’t tolerate feelings of helplessness and anxiety, they see others as tools to get what they want, and they may even get addicted to the thrill of aggression.

Sophisticated aggressors can cleverly mask their maneuvers to become successful and powerful.

Be a master observer of aggression so you can identify and manage chronic aggressors. These types of people tend to have lots of enemies, present themselves as a crusader or eccentric genius, or have obsessive habits. Focus on their real goals instead of their false fronts, outwit them instead of using direct confrontation, and temporarily cross the lines yourself if need be.

Examples of passive-aggressive strategies include:

Motivate and influence others

“Learn to create some mystery around you, to use strategic absence to make people desire your return, to want to possess you.”

Law of covetousness - become an object of desire

It’s a human tendency to covet what we don’t have. Once we get what we want, we get distracted by something else that seems even better.

People may say they want truth and honesty, but they actually want to stimulate their fantasy.

Direct your inherent restlessness and discontent into tangible improvements. Instead of chasing after every distraction, know what you truly want so you won’t be distracted by what others are trying to influence you to want.

Everyone has perceptions about themselves that they defend fiercely regardless of whether they’re true.

There are three universal self-opinions:

To influence someone, don’t try to show how good you are nor challenge them directly. Instead, soften their defenses by validating their self-opinion and aligning your idea with it.

We want to believe that our emotions are pure and simple when we’re actually ambivalent toward most things. For example, we may admire yet envy someone.

We want our leaders’ protection and direction, but we hate feeling restrained or inferior.

People can turn on their leaders during a setback or if they seem weak. Never feel entitled to someone else’s respect.

There are two pillars of authority:

Be an observer of authority and influence: Examine how your parents, teachers, mentors, or other authority figures have impacted you. Closely observe leaders in action and identify their sources of authority (or lack of it).

Seek to cultivate your inner authority. Contribute to others, cultivate your unique spirit and purpose, and pursue your priorities with discipline, excellence, and urgency.

“We sabotage our career and relationships by unconsciously creating the circumstances we fear the most. The human attitude, however, is malleable.”

Law of self-sabotage - change your attitude

Our attitude affects how we interpret and respond to events and people, thus creating a self-fulfilling prophecy. We often sabotage ourselves by unintentionally creating the circumstances we fear the most. For example, if you’re afraid to fail, you won’t try new things or learn from your mistakes, resulting in a greater chance of failure.

The five most negative attitudes are:

Law of repression - know your dark side

We all have a dark side - the selfish, greedy, or aggressive parts of ourselves - that we hide in order to fit in and be liked and respected. The psychologist Carl Jung calls this the Shadow. It can’t be fully hidden and tends to leak out when you’re stressed, hurt, feeling insecure, or as you get older.

Some common signs include:

There are seven common traits that often hide a darker side.

When you’re aware of your dark side, it loses its power over you. You can then tap into your full range of creative energies to become more complete, authentic, and attractive.

“We forget the role that luck may have played in the success, or the contributions of others. We imagine we have the golden touch. Losing contact with reality, we make irrational decisions.”

Law of grandiosity - be grounded in reality

Humans want to think highly of ourselves, to the point we tend to imagine our superiority. We amplify our successes, discount the role of luck or others’ contribution, and allow admiration to inflate our ego until we lose touch with reality and eventually come crashing down.

Learn to identify the signs of elevated grandiosity in yourself and in others. These include talking big, taking credit for successes, failing to listen, rejecting criticism, and hanging on to masks even in private.

Grandiose leaders rise to power because they project confidence, boldness, and a larger-than-life presence. The best way to deal with such leaders is to reveal the illusions for what they are—merely a glorious image they conjured.

The six common illusions are:

The relationships we have with our parents create gaps or expectations which we project into our adult relationships. Watch out for these six common types of gender projections:

Use the best of your feminine and masculine traits to become more flexible, balanced, and effective.

Law of aimlessness - develop a sense of purpose

We are complex beings with many conflicting moods and desires. If we act on all our instincts, we’ll find ourselves drifting aimlessly. Have a clear sense of purpose, let it guide your decisions, and focus your energy toward one primary mission.

All of us have an inner voice that tells us if we’re on the right path. When you listen closely to that voice, you feel clear, whole, and energized. This is not the same as the voice of your ego which seeks attention or instant gratification. Apply your uniqueness - your unique DNA, life experiences, and purpose - to something bigger than yourself.

Don’t be distracted by false purposes, such as the pursuit of pleasure, causes driven by ego or ugly emotions, money and trappings of symbols, attention, and cynicism. Your real purpose will come from an inner truth that you feel deeply connected to, while a false purpose comes from external sources such as the desire to conform.

We’re strongly defined by the generation that we’re born into. Each generation has a spirit that encompasses its mindset, power dynamics, symbols, myths, beliefs, and so on. You’d be a different person if you were born in the 1920s vs the 1980s.

Each generation inherits values from their parents, yet seeks something new. 14th-century scholar Ibn Khaldun theorized that history moves in cycles across 4 generations:

Our values depend on where we fit in this pattern, and each generation tends to move in the opposite direction of the previous one. Generational awareness is about understanding:

Law of death denial - understand the shortness of life

We tend to avoid thinking about death. We act as if we have all the time in the world when in reality, death can claim us any time. Contemplate our common mortality to realize how short life is so you’ll feel the urgency to fulfill your purpose. We’re all bound by our mortality.

A brush with death actually makes us feel more alive and awake—that’s the paradoxical death effect in action.

Exploit the spirit of the times
Growth

Become an interesting hybrid of the times
Growth