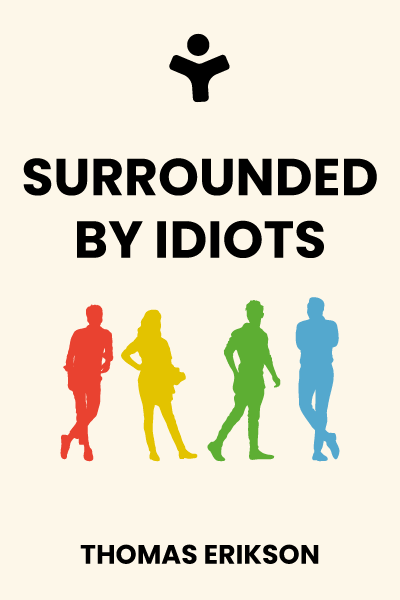 Surrounded by Idiots: The Four Types of Human Behavior and How to Effectively Communicate with Each in Business

We all have different ways of approaching the world based on our personalities. This makes it difficult for us to understand each other, potentially leading to clashes in both professional and private relationships. But what if there’s a way to bridge these gaps? Surrounded by Idiots explores the four simple personality types we may encounter anywhere: Red, Blue, Yellow, and Green. Some people are a single type, while others are a combination of more than one. By identifying someone’s personality type, you can modify your behavior and improve your interactions with them. Surrounded by Idiots demonstrates a simple system that will transform all relationships in your life!

How to Recognize a Real Alpha

Personalities are split into four categories, which can be identified using a simple color system: Red, Yellow, Blue, and Green. Red is the dominant personality, Yellow is the inspiring and creative personality, Blue is the analytical personality, and Green is the stable personality.

We all fit into these categories in some way; in fact, most people exhibit behavior from multiple categories. However, by understanding which color is most dominant in a person, we can better understand them and change the way we interact with them. Ultimately, this allows us to improve relationships in the workplace and at home.

Red is often seen as the alpha personality type, which can be an asset, but only when you interact with them correctly. If you don’t, they can steamroll over people and be too forceful in certain situations.

Red people are very driven and dynamic but can also be hot-tempered and impulsive. They are task-oriented people who love challenges and always look for ways to improve and grow. They’re also hugely competitive. Identifying red people is quite simple because they tend to dominate most situations they are in.

How to Recognize Someone Whose Head is in the Clouds

“Do you know anyone who sees sunshine where others see dark clouds? Have you met anyone who can laugh even though he hasn’t had any good news for months? Then you’ve met a Yellow.”

People with Yellow personalities are less focused than Reds. They are still quite outgoing and talkative but tend to answer questions and respond to the conversation rather than driving it as Reds do.

They also tend to go off on tangents and tell interesting anecdotes instead of being focused and efficient. Yellow people are always a hit at parties because they’re fun and entertaining. Like Reds, they are decisive but make decisions based on gut feelings rather than looking at all the information. Yellows are optimistic in most situations, which rubs off on the people around them.

In Pursuit of Perfection

“A Blue has all the right answers. In the background, he analyzes: classifies, evaluates, assesses.”

Blue people like to dig down into the details. They want to analyze everything and draw logical conclusions about things. If you go to their house, everything will be neat and organized with labels.

People often see Blue personalities as pessimistic, but they would describe themselves as realists. They calculate the risks and weigh all their options before making any decision. They are usually introverted and won’t be the life and soul of the party.

Why Is Change So Difficult

The Green personality is the most common and is a middle ground between the other colors. They balance out the most extreme behavioral traits of the other personality types.

In situations where Reds and Yellows hit the ground running, Greens will be calmer and take a slower approach. When Blues get caught up in the details, Greens focus more on the big picture. Overall, they are more passive than other types.

How to Evaluate Someone When You Can’t Meet in Person

“Different colors have distinct writing styles; some take the time to express themselves, while others keep brief.”

Working out somebody’s personality type is relatively easy when you meet face to face, but what about in writing? Well, you can still pick up on certain cues in emails and other written communications and tailor your response accordingly.

By looking at several factors like the language used, the information contained, and how well it has been crafted, you can roughly determine what kind of person you are dealing with.

“Be willing to take initiative. Offer suggestions that the Red didn’t ask for. As usual, get ready for a fight, but he will like that you are driven.”

You can improve relationships in your private and professional life by adapting your behavior based on the type of person you are talking to. That doesn’t mean completely changing your personality, but you should understand how they like to do things and try to accommodate that. With a Red personality, you should never waste time.

Instead, be clear and concise and get straight to the point. Come up with efficient solutions to problems and be willing to clash with them to put your point across as they attempt to dominate the conversation.

“Yellows are at their best when everyone is being friendly, and the sun is shining.”

The key to interacting with a Yellow personality is to keep them happy. When everybody is in a positive mood, and things are relaxed, they will feel comfortable. However, this can make them easily distracted; if you only focus on keeping them happy, nothing will get done. So, you also need to help them stay on track and maintain their focus.

“Being Blue is a little like doing military service: No excuses will be allowed.”

Blue personality thrives in the right conditions but often finds it hard to interact with others. They have a very specific way of doing things, and when faced with other personality types that don’t gel with that, they often dissociate themselves. So you need to encourage them to work with others instead of getting lost in their own world.

Blue people can be very slow, too, because they spend so long analyzing every tiny detail. They need a push to get them to make decisions and move things forward, especially when working to tight deadlines.

“Security will always be important to a Green. A Green worries about everything that may happen.”

Green personalities are easier to deal with, in some senses, because they are laid back. They are happier to go along with others and accommodate them. However, they can be resistant to change and very hesitant to take action. That’s why you need to push them and take charge in certain situations to help them live up to their potential.