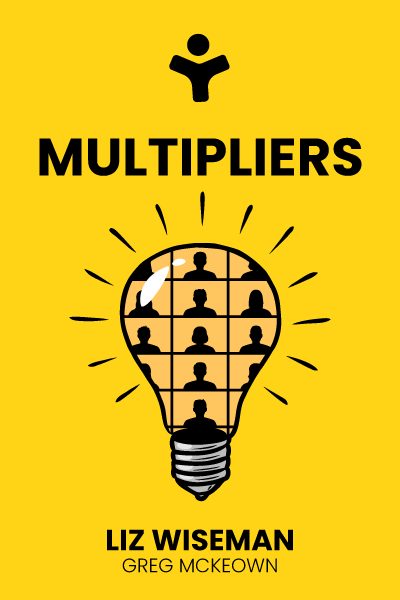 Multipliers: How the Best Leaders Make Everyone Smarter

In Multipliers, the author unearths and explains why some leaders create genius all around them while others seem to drain intelligence and capability from an organization. By analyzing over 150 executives across the Americas, Europe, Asia, and Africa, the book provides practical insight into exactly how to lead more like a Multiplier who sees, uses, and grows the intelligence of others, than like a Diminisher, who shuts down the smarts of those around them. It also teaches how to deal with diminishing leaders within your organization and how to avoid becoming one yourself.

“It isn’t how much you know that matters. What matters is how much access you have to what other people know.”

Some leaders seem to drain the intelligence and capability of those around them. For them to look smart, other people have to end up looking dumb. When they walk into a room, the shared IQ drops, and the length of meetings doubles. Around these leaders, intelligence flows only one way — from them to others.

Other leaders know how to use their intelligence as a tool rather than a weapon. They apply their intelligence to amplify the smarts and capabilities of others. People don’t just feel better but actually get smarter around them. Ideas grow, challenges are surmounted, and hard problems are solved. When they enter a room, lightbulbs start switching on over people’s heads. Meetings with them are essentially idea mash-up sessions.

These leaders seem to make everyone around them better and more capable. They aren’t just intelligent themselves; they are ‘intelligence Multipliers.' They understand that the person sitting at the apex of the intelligence hierarchy is the genius-maker, not the genius.

“Multipliers operate as Talent Magnets to attract talented people and then use them to their fullest capacity, that is, working at their highest point of contribution.”

In any organization, there are Talent Magnets, people who attract the best talent, utilize it to the fullest, and ready it for the next stage. These leaders are known not only for delivering results but also for creating a place where young, talented people can grow. They are accelerators of other people’s careers.

Other leaders acquire resources to build their empires instead. Rather than pulling people into their teams as talents to be developed, they hire them as resources to be deployed to a particular task and then are left to languish.

Talent Magnets are Multipliers. They have access to the best talent, not because they’re necessarily great recruiters but because people flock to work for them, knowing that their capabilities will be appreciated and market values will increase. These leaders also know how to get extraordinary results from ordinary people, finding and unleashing the genius in them by ensuring they work only where they can best contribute.

“Multipliers, by contrast, liberate people from the oppressive forces within the corporate hierarchy. They free people to think, to speak, and to act with reason. They create an environment where the best ideas surface and where people do their best work.”

In any hierarchical organization, the playing field is rarely level. Senior leaders stand on the high side of the field, and ideas and policies roll easily down to the lower side. These policies unintentionally keep people from thinking, and the hierarchical structures make it easy for the ‘Tyrants’ to reign.

Tyrants create a tense environment that’s full of stress and anxiety. Liberators, on the other hand, create an intense environment that requires concentration, diligence, and energy. It’s an environment where people are encouraged to think for themselves and feel a strong obligation to do their best work. In the presence of a Tyrant, people try not to stand out, while a Liberator encourages people to step up.

Multipliers liberate people from the intimidation of hierarchical organizations and dominant tyrannical leaders. They don’t tell people what to think; they tell them what to think about. They create an environment where every brain is utilized, and every voice is heard.

“Multipliers don’t give answers. Instead, they begin a process of discovery: they provide just enough information to provoke thinking and to help people discover and see the opportunity for themselves.”

Diminishers, on the other hand, operate as ‘Know-It-Alls.’ They assume their job is to know the most and to tell their organization what to do. Their teams often revolve around what they know, with people wasting cycles trying to deduce what the boss thinks and how to at least look like they’re executing accordingly. They end up placing an artificial limit on what their organizations can accomplish because of this and leave their team members feeling discouraged rather than challenged.

Multipliers work with the assumption that people get smarter and stronger by being challenged. They ask their team members big, provocative, and interesting questions, encouraging them to pursue things they don’t know how to do yet.

“Multipliers make decisions by first engaging people in debate; not only to achieve sound decisions but also to develop collective intelligence and to ready their organizations to execute.”

While many leaders attempt the management practice of inclusion and discussion, they still operate with an elitist view of intelligence, believing that the brain power of the organization sits with a select few. They lack a rich view of intelligence in which many sources of insight are waiting to be more fully utilized or developed through engagement and challenge.

A leader’s ability to garner the full intelligence of the organization depends on some of the beliefs they hold most deeply. Diminishers tend to believe that there are only a few people worth listening to, while Multipliers are interested in every relevant insight all people can offer. They play the role of ‘Debate Maker,’ realizing that although not all decisions require collective input, decisions of consequence need rigorous debates that prosecute the issues with hard facts. Through debate, they challenge and stretch what people know, making the organization smarter over time.

Drive sound decision-making within your team and organization
Team leadership

“Multipliers invest in the success of others. They may jump in to teach and share their ideas, but they always return to accountability.”

When something is off the rails with your team, do you take over? Or do you invest? When you take the pen to add your ideas on the whiteboard, do you give it back? Or does it stay in your hand? When leaders fail to return ownership, they create dependent organizations. This is the way of the Diminisher. They jump in, save the day, and deliver results through their personal involvement.

Multipliers enable others to operate independently by giving them ownership of results and investing in their success. These leaders know they can’t always be present to perform emergency rescues, so they ensure that people on their teams are self-sufficient and can operate without their direct presence.

They are ‘Investors’ who hand the pen back to their teams, cementing accountability for action where it should be. By doing this, they create organizations free from the nagging need for the leader’s rescue.

“While the narcissistic leaders grab the headlines, the vast majority of diminishing happening inside our workplaces is done by the Accidental Diminisher; managers with the best of intentions, good people who think they are doing a good job leading.”

People can be hindered by your honest attempts to help, teach, or lead by example. This can happen when you’re too quick with your ideas and too swift with action. Too supportive and helpful, or just too enthusiastic and optimistic.

The most common way leaders accidentally act as Diminishers is by playing ‘Rescuer’. These kinds of leaders don’t like to see people struggle, make avoidable mistakes, or fail. At the first sign of distress, they jump in and help. Occasionally, they swoop in with a big, heroic rescue. But most times, they simply lend a hand, resolve a problem, and help their people across the finish line.

Though their intentions may be noble, Rescuers starve people of the vital learning they need to be successful. When managers help too soon and often, people around them become dependent and helpless. Instead of feeling successful, employees experience frustration and depleted confidence when they fail to cross the finish line by themselves.

Remember that these tendencies don’t make you a Diminisher. It simply increases your likelihood of having a diminishing impact on your team. Unfortunately, you’re likely to be completely unaware of this impact and probably the last to know. The best thing you can do is develop some self-awareness and catch yourself early.

“It is tempting to hit a wall and confront your Diminisher; it is equally tempting to fall back and comply. But there is a third, more productive alternative: multiply your way out.”

Too many well-intended managers are stuck beneath diminishing leaders. They aspire to lead by bringing out the best in others but find themselves being sucked down a Diminisher’s vortex.

The five most prevalent reactions to Diminishers are to: confront them, avoid them, comply and lie low, convince them you’re right and take HR actions. While these are the most popular strategies, they’re also the least effective. When our reasoning abilities are threatened — which is one of the diminishing effects — our judgment and coping strategies are also jeopardized.

Dealing with Diminishers is difficult and requires your best thinking. With the right mindset and a set of smart tactics, you can minimize the diminishing effect that bad leaders can have on you. There are no templates for this, only sound ideas that must be executed with discretion and savviness.

While leading like a Multiplier might be management science, dealing with Diminishers is an art form. But if done thoughtfully and persistently, you’d ultimately join the ranks of the ‘Invincibles’ — those who continue to work using their highest capacity and offer their greatest intelligence, despite being surrounded by diminishing behaviors.