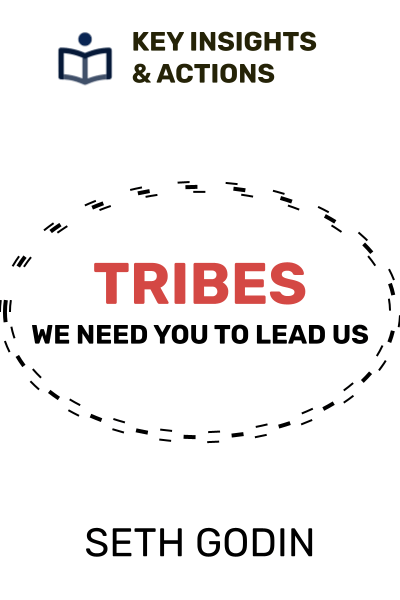 Tribes: We Need You to Lead Us

We all want to be part of a tribe. Within our DNA is the need for belonging, and we need leaders. However, leadership is difficult, it’s uncomfortable, and it can be risky. That’s why so few people decide to lead a tribe.

Tribes already exist all around you. And many are without leaders, or without good leaders. They are waiting for you to take the lead. Nowadays, you can find your tribe in a local community, at work, or even on the internet. You can find a group of people that need a leader in many different places.

This book will guide you through the principles you must follow to create a real tribe and provide strategies you can use to grow it.

Humans have the need to belong. One of the most powerful survival mechanisms is to be part of a tribe—to contribute, and benefit from, a small group of like-minded people. Tribes used to be local. But that all changed with the internet.

Thanks to the internet, it’s much easier to coordinate tribes than ever before. In the past, it was difficult to get a message out there. Now, everyone can have his own small tribe and lead people.

Look at Gary Vaynerchuk—he has a strong passion for wine. He does not try to sell wine. Instead, he builds his tribe by sharing his passion. He leads.

Leaders and managers are completely different. Managers make sure that things are done correctly, and everyone is following the rules. Managers don’t lead, they control.

Leaders, on the other hand, create change that their followers believe in. Change is frightening. Many people who would become leaders view change as more of a threat than a promise. Stability is an illusion. This illusion is why the world belongs to leaders, not managers.

Become a leader who builds a tribe.
Team leadership   25

Building and Improving a Tribe

Therefore, the leader can improve the effectiveness of the tribe in three ways:

Most leaders use only the third tactic. They want to have a bigger tribe. However, the first two methods lead to greater impact. Every action you take can affect those three elements. Your goal is to figure out how to maximize each of them.

Use these three elements to build a tribe.
Team leadership   5

Remarkable products are worth criticizing. Criticism is not always bad. It can actually be a sign that you’re doing something correctly. If what you do has no critics, it means you are not remarkable. You are just average.

The fear of failure doesn’t exist. It’s not failure we are afraid of. It’s the criticism and blame that often comes with failure that we fear. We fear criticism, even if the criticism is not obvious and only in the heads of others.

Each time you are criticized, remind yourself of all the good feedback you have received. Don’t let the critics influence your mood.

Talk yourself out of fear.
Growth   7

There are not many leaders because leading is uncomfortable. And this discomfort creates leverage that makes leadership worthwhile.

It is uncomfortable to stand up in front of strangers, to propose an idea that might fail, or to challenge the status quo.

If you identified discomfort, you have found the place where a leader is needed.

If you don’t feel discomfort being a leader, you have not yet reached your full potential.

You Choose What Your Tribe Will Be

To win an election, you need only half of the population to vote for you. You don’t even need half of them to support you, you just need their votes.

Your tribe will not appeal to everyone. It will attract only certain types of people. You choose this group of people through your actions.

Some tribes are not meant to be large. In fact, many types of tribes are effective only when they are small. Classrooms, for example, function more effectively with fewer students. The fewer students in the class, the better teaching the professor can offer.

To Initiate Change You Must Have the Belief

Leaders are like heretics. In this world, there are too many heretics to burn, so we celebrate them. Heretics are those who are winning.

Don’t ask the world for permission to become a leader.
Confidence   6

“Faith is critical to all innovation. Without faith, it’s suicidal to be a leader, to act like a heretic."

Religion, on the other hand, represents a strict set of rules that our fellow humans have overlaid on top of our faith. Religion supports the status quo and encourages us to fit in, not to stand out.”

We are all surrounded by many religions. And these are not only religions written with a capital “R”. There are also “religions” such as IBM, a company founded in 1960 that has precise dressing protocols and other rules, or Broadway, which determines what a musical is supposed to look and feel like.

Faith is the opposite of religion. Faith is the thing that makes us stand out. It can make us a leader. To lead, you must challenge the status quo of the religion you’re living under.

“The easiest thing is to react.

The second easiest thing is to respond.

But the hardest thing is to initiate.”

Companies in old times were very structured. They had 5-year plans with no option for alteration. Everyone in the company followed the plan, and no one was allowed to change it.

But the old times are over, and nowadays, companies need heretics that initiate change. Old companies, such as the music industry, fail. They fail because they didn’t have heretics that would initiate change while it was still possible. They fail because they believe in the status quo. They believe that no one can threaten them, and it’s easier to do what they have done for years instead of initiating change.

New companies, like Facebook or Google, operate in a completely different way. They encourage change, and they have many heretics that try new things. They are flexible.

However, this change is not just a company policy. This change comes from the top heretic—from someone brave enough to initiate new things. It takes guts to be a leader.

“You can always claim the career you deserve merely by refusing to walk down the same path as everyone else just because everyone else is already doing it.”

The system taught us to sheepwalk. What does that mean? Someone who is sheepwalking is a person that has been raised to be obedient, to do a brain-dead job, and to have enough fear to stay in line. You’ve probably encountered someone like this.

Are you working 50 weeks a year just to have 2 weeks’ escape from the job you are forced to do? That might be a sign that you are sheepwalking. That’s not good.

Every leader supports a movement. A movement like the Civil Rights movement, the democracy movement, or free speech. You can have a narrow movement, or a movement with ten, twenty, or a thousand people. These could be people in your community or people around the world.

You can discover and ignite a micromovement and then find people who choose to follow it.

Follow these principles to create a movement.
Team leadership   5

The organizations that are most resisting change, that are fighting the leaders, are those that most need new leaders. This might sound counterintuitive at the beginning.

That is because it’s very rare in a tribe that there is an obvious need for a leader. The best leaders rise in situations where it’s not obvious at all. No one will ask you to be a leader. If you are waiting for someone to ask, you will not become a leader. Leaders must have the guts to independently rise up from the establishment and initiate change.

Caring is the key emotion of the tribe. Tribe members care about each other and their goals. Many organizations are unable to create tribes because no one cares. If you don’t really care, you cannot lead.

“Being charismatic doesn’t make you a leader. Being a leader makes you charismatic.”

Many leaders seem to have nothing in common. You can encounter leaders of different genders, skin colors, ages, and even personality types. However, they have one thing in common: charisma. Charisma is a choice, not a gift. Becoming a leader makes you charismatic.

Why Not You, Why Now Now?

There is no correlation between money, education, power, and successful leadership. None. You can be a leader right now, and there is really nothing that holds you back from becoming one.

There are tribes out there that need leaders. They’re waiting for you. Saying “yes” to this is uncomfortable, and it can be risky. However, it’s also an opportunity. Or, as Flynn Berry said, “There are no opportunities, there are obligations.”

It’s your obligation to stand out and lead others towards a common vision.