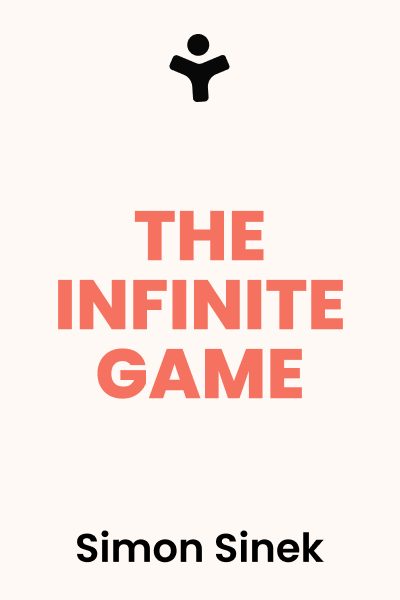 Organizations and businesses fail simply because their leaders are playing an infinite game with a finite mindset. The leaders who embrace an infinite mindset build stronger, more innovative, and more inspiring organizations. They have the resilience to thrive in an ever-changing world.

Life is an infinite game.

There are no winners or losers in an infinite game; there is only ahead and behind.

This book answers a deceptively simple question: How can we stay ahead in an infinite game?

If there are at least two players, a game exists. There are two kinds of games: Finite Games and Infinite Games.

Finite games are played with people we know. There is a set of rules, and referees are there to enforce those rules. All the players follow the rules and accept penalties when they break the rules. Everyone agrees whichever team has scored more points by the end of the set time period will be declared the winner, the game will end and everyone will go back. In finite games, there is always a beginning, a middle and an end.

Infinite games are played with both people we know, and don’t know of. There is no specific set of rules, besides enforced laws which vary from place to place. How each player plays is up to them and they can change how they play the game anytime. Infinite games have infinite time. Because there is no finish line and no end to the game, there is no such thing as “winning” an infinite game.

In an infinite game, the primary aim is to keep playing to perpetuate the game.

Running a business is an infinite game. We may not know all the other players and new ones can join the game at any time. Each player has their own strategies. To succeed in this infinite game, we have to stop thinking about who’s the best and start thinking about how to build organizations that are strong enough to stay in the game for a long time.

When we play with a finite mindset in the Infinite Game, we will continue to make decisions that sabotage our own ambitions. If we believe that trust, cooperation and innovation matter to the long-term prospects of our organizations, then we have only one choice—to learn how to play with an infinite mindset.

“If we work for an organization with a Just cause, we may like our job some days, but we will always love our jobs.”

We play the finite game to win, but the motivation to play in an infinite game is completely different—the goal is not to win, but to keep playing. Any leader who wishes to lead in the Infinite Game must have a clear Just Cause.

A Just Cause is a specific and appealing vision of a future state that does not yet exist. However, people still make sacrifices to help advance towards that vision. When there is a Just Cause, our days take on more meaning and feel more fulfilling. These are feelings that will carry on week after week, month after month, year after year.

In order for a Just Cause to provide eternal guidance for our work, it must meet five standards:

Trust is a feeling. It cannot be forced upon someone. You cannot order someone to trust you. For the feeling of trust to develop, you need to put efforts in making your teammates feel safe while expressing themselves, being vulnerable and accepting their mistakes.

When people work on a Trusting Team, they feel safe to express vulnerability. They feel safe to raise our hands and admit they made a mistake, be honest about shortfalls in performance, take responsibility for their behavior. They are not afraid to ask for help, as they know their boss or their colleagues will be there to support them.

When they are not on a Trusting Team, they do not feel like they can express any kind of vulnerability at work. They tend to hide mistakes and act as if they don't need any help. Without Trusting Teams, all the cracks in an organization are hidden or ignored. Over time, these cracks will compound and spread until things start to break. Therefore, Trusting Teams are essential to the smooth running of any organization.

“An excessive focus on beating our competition not only gets exhausting over time, it can actually stifle innovation.”

If you are a player in an infinite game, you need to stop thinking of other players as competitors to be beaten and start thinking of them as “Worthy Rivals” who can help you become a better player.

Regardless of who they are or where we find them, the crucial point is that they do some things better than us. They may make a superior product, command greater loyalty, are better overall leaders, or act with a clearer sense of purpose than we do. You don’t need to admire everything about them. You can simply acknowledge that they have strengths and abilities from which you could learn.

Learn from those who can do something better than you
Growth

“It’s about always monitoring all the things that are going on and learning from that.” - Alan Mulally

Existential Flexibility is the capacity to start an extreme disruption to a business model in order to advance your cause further. Basically, when an infinite-minded leader discovers a new technology that is more likely to help them advance their cause than what they are currently using, they make a change.

Existential Flexibility doesn’t happen at the creation of the company, it happens when the company is fully formed. An infinite minded leader risks the certainty of the current and profitable path with the uncertainty of an alternative path.

For example, after the launch of the Apple I and II, it was already a highly successful company. They were working on their next product iteration when Jobs and his executives visited Xerox’s innovation center in Palo Alto. On this tour, the Apple executives were shown one of the new technologies Xerox had developed, called the graphical user interface. This allowed people to use a computer without learning a computer language. With GUI, Users would be able to use a mouse to move the cursor on the screen to click on visual icons on the desktop.

After seeing their innovation, Apple knew that they had to change the course they were on. They needed to invest in GUI because their vision was to make the best products on earth. They invested in GUI even though they had already invested millions of dollars and countless man-hours in an entirely different direction.

With that existential flexibility, they set themselves on a path that in four years saw the introduction of the Macintosh, a computer operating system that completely revolutionized personal computing.

“Leaders are the one who have the courage to lead, to put themselves at personal risk to open a path for others to follow.”

Having courage to lead refers to the willingness to take risks for the good of an unknown future. Such a decision might cost us our job and money, but we need courage to lead to operate to a standard that is higher than the law—to a standard of ethics. When we are pressured to do things that violate that ethical code, our courage to lead will enable us to stand up.

Courage, in the Infinite Game, is not solely about the actions we take. Even leaders who operate with a finite mindset can take risks. Courage, as it relates to leading with an infinite mindset, is the willingness to completely change our perception of how the world works. It’s about making decisions according to the current standards of business and ignoring the pressure of outside parties who do not believe in our cause.

For Example, In February 2014, CVS Caremark announced that it would stop selling any tobacco-related products in all of their over 2,800 stores. This was a decision that would incur a loss of $2 billion per year.  It was a decision they chose to make without any competitive pressure, loud demands and online campaigns.

Everyone thought this was an absolute win for CVS’s competitors. The CVS company reached a decision that seven hundred packs of cigarettes a week per store would now be sold by some other retailer.

However, according to an independent study commissioned by CVS to see the impact of their decision, overall cigarette sales dropped by 1 percent across all retailers in the states where CVS had a 15 percent market share or greater.

In those states, the average smoker bought five fewer packs of cigarettes, which totaled 95 million fewer packs sold over an eight-month period. On the other hand, the number of nicotine patches sold increased by 4 percent in the period immediately after CVS stopped selling cigarettes, indicating that CVS’s decision actually encouraged smokers to quit.

This decision also unlocked a greater selection of high-quality brands who wanted to have their products displayed at CVS, such as Irwin Naturals. CVS had a clear cause - to help people on their path to better health. They had the courage to lead, even when it could have led to a huge loss.

Develop the courage to lead
Confidence