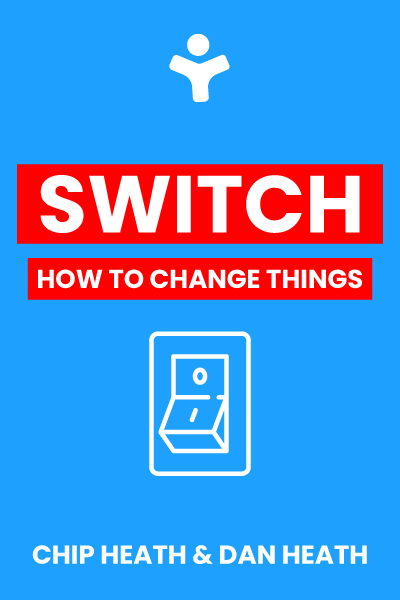 Switch: How to Change Things When Change Is Hard

A compelling narrative that demystifies the age-old conflict between your rational and emotional mind. In Switch, you’ll learn how anyone can unite these two minds to effect transformative change. Packed with real-life stories and tons of counterintuitive research, this book shows you the pattern that underlies all success and how you can make any change in any area of your life.

“Big problems are rarely solved with commensurately big solutions. Instead, they are most often solved by a sequence of small solutions”

Your mind has two parts—the Rider (logical) and the Elephant (emotional). Though the Rider can think and plan for a better future, it tends to overanalyze situations. Since it’s too problem-focused, it spins its wheels worrying about an issue instead of finding solutions to change your situation.

To make a positive change in your life, you need to direct your Rider. This is possible by focusing on the bright spots of the situation you’re in.

Bright spots refer to the few positive aspects of your situation. To find these bright spots, you have to identify what’s working and how to do more of it. This is a good technique to use when dealing with problems that have proven extremely difficult to solve using conventional means. The goal is to give your analytical mind direction while also motivating your emotional mind.

In life, having more options usually seems like a good thing. However, when it comes to making decisions, the more choices you’re offered, the harder it is to decide. This is known as decision paralysis, and it’s the result of your Rider becoming exhausted when exposed to too many choices. This is why you’re likely to choose the same brand you’ve always bought even when offered 10 new brands of the same product. When unsure of which option to pick, your mind simply makes the default choice.

Choosing the status quo feels comfortable because your mind prefers certainty. However, when a change occurs, uncertainty is introduced as you’re faced with new choices. Due to the emotional anxiety brought about by change, your Rider has to work extra hard to lead your Elephant down an unfamiliar path.

If the path itself is ambiguous i.e. the change isn’t clearly defined, then your mind automatically resists making the change. Therefore, the only way to ensure that the change is successful is to translate ambiguous goals into concrete actions. You have to create a clear plan that can guide your behavior at critical moments. This way, you won’t have to exhaust yourself when it’s time to make the hard decisions.

Point in the right direction

“When you describe a compelling destination, you're helping to correct one of the Rider's great weaknesses—the tendency to get lost in analysis”

We often assume that we can inspire change in an organization by setting SMART goals. However, SMART goals only work when dealing with steady situations—not change processes. Furthermore, SMART goals are often uninspiring and unemotional. Remember that your goal is to not only direct the Rider but also to inspire the Elephant. Therefore, you need audacious goals that can entice people at an emotional level.

This is only possible by creating a vivid picture of the outcome you desire to achieve. Think of it as a destination postcard that describes where you’re headed and what the future looks like. By presenting a vivid description of the outcome, you’re ensuring that everyone has something to aim for. You’re also showing everyone why the journey of change is worthwhile.

Vividly describe what you want the future to look like
Focus

Most managers in large organizations implement change by focusing on strategy, systems, and structures. This may lead to success in the short term but it never creates the kind of lasting change that takes the company to the next level. The reason is that real change happens by changing people’s behavior, and behavioral change only occurs when you speak to their emotions.

In such cases, you need to adopt a See—Feel—Change approach. You have to present your argument in a way that makes your audience feel the change. By speaking to their emotions, you’re motivating them to abandon the status quo and take new action. Regardless of whether you trigger positive or negative emotions, the goal is to get people to move in the direction of change.

“When you engineer early successes, what you're really doing is engineering hope. Hope is precious to a change effort”

One of the hardest things about adopting change is overcoming the initial resistance. The change process can seem daunting and most people feel overwhelmed just by thinking about it. This is because the Elephant in you tends to be easily demoralized by any sign of potential failure. If you start making a change and you fail to see any progress, you’re tempted to quit and go back to your comfort zone.

This is why it’s important to create a sense of progress in the initial phases of your change journey. You want to reassure your Elephant that things are going well and thus they should keep moving forward. You achieve this by making the first steps of the journey extremely easy for yourself. You’re essentially tricking yourself into believing that you’re making progress even before you begin.

Create an identity around the change

“Because identities are central to the way people make decisions, any change effort that violates someone's identity is likely doomed to failure”

When you want to implement change, whether it’s in a company or village setting, you need the local population to support your efforts. This is easier said than done because humans naturally resist change even when it’s for their benefit. They prefer the status quo because it has become part of their identity.

Therefore, you have to inspire people to create a new identity based on the change you want them to embrace. This new identity makes them feel more determined and motivated because they now see themselves as part of the change process. With a new identity, people find it easier to shift their behavior away from the old toward the new. Whether it’s individually or as a collective, they can now take steps to manifest the change.

Rethink your identity to create a shift in behavior
Purpose (work)

“What looks like a people problem is often a situation problem”

We tend to ignore the role that a situation plays in other people’s behavior. For example, a driver who cuts you off in traffic is an ignorant jerk but when you do it to someone else, you’re simply rushing for an important meeting. Yet that driver may be rushing to see their sick mother on her deathbed. In other words, we’re quick to assign people’s behavior to their character rather than the situation they are in. This is known as Fundamental Attribution Error.

This error prevents you from seeing how a specific situation is affecting people’s ability to adopt change. Even after you provide clear directions and motivate your employees to act, they may still struggle to change their behavior. You may even resort to threats and punishments. However, what you need to realize is that the problem is their environment and not their character.

To change people’s behavior, you need to create an environment that makes the change process easier. By rearranging the systems and structures in the environment to support the change, you’re helping people get on a new path. Your goal is to tweak the situation so that the desired behavior is easier and the undesirable behavior becomes much harder.

Habits are incredibly useful because they allow your mind to relax. Remember that your Rider gets tired if you spend too much time thinking about every move you’re making. By adopting specific daily habits, you’re practically living your life on autopilot. Unfortunately, not all habits are good, such as overeating or procrastinating. Therefore, to change yourself and others, you have to reinforce the positive and discourage negative habits.

One of the factors that subtly affect your habits is your environment. It’s easier to change a habit by simply moving location or changing the people you hang out with. However, relocating your office just to change your team’s work habits is impractical. Therefore, you must also focus on the mental aspect of change. Mental triggers are useful because they make it easier to identify your next action step.

Ultimately, make sure that the habit you’re promoting is aligned with your change mission. Furthermore, the habit must be easy to adopt so that you eliminate all excuses from those resisting the change.

“If you want to change things, you have to pay close attention to social signals, because they can either guarantee a change effort or doom it”

Any time you find yourself in an unfamiliar or ambiguous situation, you look to the people around you for cues on how to behave. You’re hoping that someone around you knows the right response to whatever situation you’re in. This is common behavior because it’s easier to copy someone else than to think your way out of every situation.

Any kind of change naturally brings unfamiliarity. Therefore, to create change on a mass level, you have to get enough people to form a herd mentality. Human behavior is contagious, and people will imitate each other sooner or later. Whether consciously or not, most people will follow the herd when faced with an unfamiliar path. You can use this philosophy to move people in the direction of the change you seek.