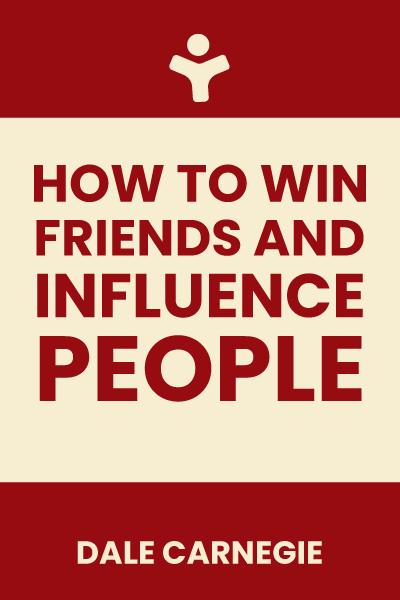 How to Win Friends and Influence People

The title says it all—this book will teach you how to win friends and influence people. As relevant today as they were when the book was first published in 1936, acclaimed author Dale Carnegie’s principles have endured the test of time. If you want to become a better leader, improve your relationships with others, or even learn to win others over to your way of thinking, this is the book for you!

Knowing how to understand another person is a difficult art. Sometimes one wrong word can destroy a long-term friendship, while a well-chosen one can make you unforgettable.

Each of us wants to feel important, relevant, and appreciated. And everyone is afraid of humiliation, defeat, and shame. If you make others feel important and confident when they are around you, then you’ll be able to bring them together.

Don't Judge Others, Start with Yourself

“Don’t complain about the snow on your neighbor’s roof, when your own doorstep is unclean.” - Confucius

Criticizing others is pointless because it forces them to defend themselves and usually causes us to justify ourselves. It is dangerous because it hurts their pride and sense of value and arouses resentment. When we criticize others, we don’t change them. Instead, we often cause permanent injury. Resentment and dislike due to criticism can only demoralize family members, friends, and employees; they cannot change what has already happened.

Any fool can criticize, complain, and condemn, but it takes character and self-control to be forgiving and understanding. Instead of criticizing people, try to understand them. Try to figure out why they behave the way they do. This is much better than condemning. It breeds tolerance, sympathy, and kindness.

Be kind to and tolerant of others when they make mistakes.
Empathy

The Big Secret of Dealing with People

“I consider my ability to arouse enthusiasm among my people...the greatest asset I possess, and the way to develop the best that is in a person is by appreciation and encouragement.” - Charles Schwab

Appreciation and praise rarely find expression in our daily lives. We must not forget that we are all human, and we crave appreciation. People need recognition! Leave a trail of gratitude in your wake.

Like a river that is constantly flowing, you will pass through this situation and point in time only once. So take advantage of it! Show kindness and strive to do good now because you may not have the opportunity in the future.

Give honest and sincere appreciation.
Socializing

“People who can put themselves in the place of other people, who can understand the workings of their minds, need never worry about what the future has in store for them.” - Owen D. Young

To influence people, you must understand the other person’s point of view. You cannot only focus on yourself. Instead, talk about what others want and show them how to achieve it. You can win the attention, time, and cooperation of even the most sought-after people by becoming genuinely interested in them.

If you want to make friends, you should start by doing things for others. These should be things that require energy, time, thought, and are not selfish. You should greet people with enthusiasm and animation, even if your interaction is only on the phone. And smile! You should always smile at others! Remember, “it happens in a flash and the memory of it sometimes lasts forever.”

Be truly interested in others to build solid relationships.
Socializing

If You Don’t Do This, You Are Headed for Trouble

One of the most important ways to gain goodwill is by remembering names—making people feel important and showing them respect. You must realize that the name and surname are wholly owned by the person you are speaking to. The surname and first name distinguish an individual from others. It is what makes somebody unique and unrepeatable. You should remember that a person’s name is, to that person, the most important sound in any language!

You Can’t Win an Argument

“If you argue and rankle and contradict, you may achieve a victory sometimes; but it will be an empty victory because you will never get your opponent’s goodwill.” - Ben Franklin

To get the best of an argument is to avoid it. As Buddha said, “Hatred is never ended by hatred, but by love.” Misunderstandings will never be resolved in dispute, but only through tact, diplomacy, conciliation, and a sincere desire to understand the other person's point of view.

Bear in mind some advice from an article from The Economic Press titled “Bits and Pieces”. It provides concrete steps to ensure that a disagreement does not turn into an argument: distrust your first instinctive impression, welcome disagreement, control your temper, look for areas of agreement, listen first, thank your opponents sincerely for their interest, promise to think over your opponents’ ideas and study them carefully, and postpone action to give both sides time to think through the problem.

Keep a disagreement from becoming an argument.
Communication

If You Are Wrong, Admit It

“If you are wrong, admit it quickly and emphatically.” - Dale Carnegie

The courage to admit your mistakes gives a lot of satisfaction. It clears the air of guilt and often helps solve the problem created by these errors. It is not an art to try to defend our mistakes. The trick is to admit them. It gives one a feeling of nobility and exultation, a sense of being better. So, if you are wrong, you should admit it quickly and clearly. If it's too late to do it quickly, at least do it emphatically.

“Three-fourths of the people you will ever meet are hungering and thirsting for sympathy. Give it to them, and they will love you.”

You should think about the other person's life to help understand their actions or motivations. If you offend someone, you should apologize and be sympathetic to their feelings. If you are insulted, you should strive for the personal satisfaction of controlling your temper and returning with courtesy for an insult.

Sympathize with others.
Communication

If You Must Find Fault, This Is the Way to Begin

“J. Pierpont Morgan observed, in one of his analytical interludes, that a person usually has two reasons for doing a thing: one that sounds good and a real one.”

People have two motivations: the real one and the one that sounds good. They want to be seen as idealists. Refer to the nobility of your interlocutor and don’t suspect him of the worst but of the best.

If you want to point out someone’s mistakes, start by drawing attention to what they did well. Instead of starting with criticism, start with something nice.

When caught in a disagreement with someone, make them feel like you consider them honest, upright, and fair.
Communication

How to Criticize and Not Be Hated for It

The most effective way to correct someone's mistakes is to do it indirectly. Don’t say it directly. Instead, help them understand and identify that they made a mistake through your actions. For example, let’s imagine a politician who wanted people to be able to come speak with him whenever they wanted. After employees made it difficult for applicants to access him, he took matters into his own hands and simply removed his office door. This caused his office staff to realize that they weren’t doing what he had asked of them without the politician having to ever point out their mistake.

How to Criticize and Not Be Hated for It

“We’re really proud of you, Johnny, for raising your grades this term. But if you had worked harder on your algebra, the results would have been better.”

Can you see the difference? Some people start with sincere praise followed by the word “but” and ending with a critical statement. In this case, the interlocutor has the right to doubt the sincere praise. For him, the praise is an introduction to criticism. It would be much better to use the word "and" instead of "but." In this way, you indirectly pay attention to what you want to change and chances are he will try to live up to our expectations. This is the most effective way to correct others’ mistakes.

Talk About Your Own Mistakes First

“Talk about your own mistakes before criticizing the other person.”

It is not nearly so difficult to listen to your own faults if the person criticizing begins by admitting that he, too, is far from perfect and also makes mistakes. Admitting your own mistakes, even if they haven't been corrected, will help you persuade others to change their behavior. Praise and humility can do a lot in our daily contacts.

Talk about your own mistakes before criticizing someone else’s.
Communication

How to Spur People On to Success

“Praise the slightest improvement and praise every improvement. Be hearty in your approbation and lavish in your praise.”

We should praise even the slightest progress. That inspires people to keep on improving. Psychologist Jess Lair said, “Praise is like sunlight to the warm human spirit. We cannot flower and grow without it. And yet, while most of us are only too ready to apply to others the cold wind of criticism, we are somehow reluctant to give our fellow the warm sunshine of praise.”

When criticism is minimized and praise is emphasized, positive reactions will emerge. We all crave recognition and gratitude, and we will do almost anything to get it. However, no one likes insincerity. Any praise should be sincere and come straight from the heart.

“Use encouragement. Make the fault seem easy to correct.”

You should praise the things that others do right and minimize their errors. You should inspire others to act, not demotivate them.

Be liberal with your encouragement. Make the task seem easy, and let the other person know that you have faith in their natural abilities.

Encourage others to excel.
Team leadership

Making People Glad to Do What You Want

“Always make the other person happy about doing the thing you suggest.” -Edward M. House

If you want to persuade someone to do something, ask yourself how he will benefit. If he won’t, you have to create some type of benefit. For example, Napoleon appointed his 18 generals to be Marshals of France. And he called the troops under their command great armies. Such a small thing, but it worked as a motivator for the commanders.

Make the other person happy about doing what you want or need them to do.
Communication