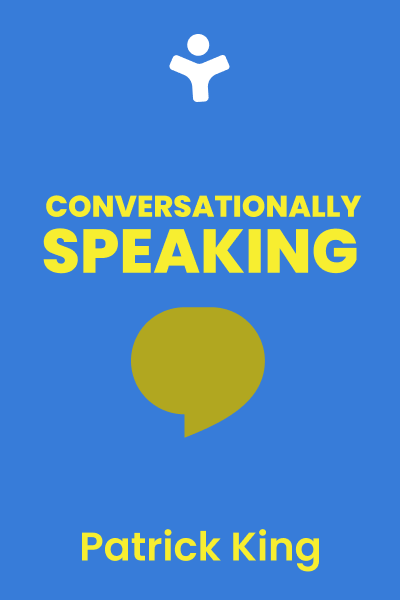 Conversationally Speaking: WHAT to Say, WHEN to Say It, and HOW to Never Run Out of Things to Say

Most people think that some of us are born with the ability to talk persuasively and some of us aren’t. But there is no such thing as that. People who are good at conversation just know a few simple skills that anyone can learn.

These skills are like tools. Imagine trying to hammer a nail with a screwdriver. Or cutting wood with a shovel.  It would take you five times as long, and you’d still end up doing a terrible job. A screwdriver and a shovel simply aren’t the right tools. But, with the right tools—a hammer and a saw—you could do these jobs well and with very little effort.

Everyone likes a verbal mirror

“The best way to engage people is to let them talk about themselves.”

People love to talk about themselves.  Give them the space to explain their motivations and intents, and no one can resist their own cleverness.

The average person navigates the world with themselves as the center. They process the information the world gives them from their own personal perspective. They can basically do all the work when you're talking to them. Your job is to read the signals carefully so that you can change the direction of the conversation to keep them talking. The funny thing about all of this is that the better you are at listening to people, the more they would think you are a brilliant conversationalist.

Be a verbal mirror
Communication

“A rule of thumb is that you will probably be required to do 75% of the leading and talking at the beginning of an interaction.”

Facing a room filled with people we don’t know often feels like a threatening situation. How do we pick one person out, engage them, and break the ice with them?

We don’t want to disrupt people that might be having a pleasant talk with someone else, because we know that we have been annoyed when random people have disturbed. We don’t want to say the wrong or awkward thing that will start an interaction off on the wrong foot.

Most of all, we just don’t want to be rejected! However, as with all things that hinge around the fear of rejection, realizing that judgment is far less prevalent than you think can do wonders. Once you can get over the mental blocks of getting rejected from a conversation, you’ll realize that it’s just a matter of opening your mouth and doing it.

Break the ice and start a conversation.
Communication

“Listening doesn't take an advanced degree, but it takes a lot of heart, empathy, and compassion.”

According to a recent statistic, most marriages in the United States break down not because of infidelity or money issues, but a failure to communicate. This might seem like an obvious thing, but it still highlights some important concepts in our lives.

First, people are generally not that great at the ability to engage people meaningfully in conversation and have it lead somewhere. Even within the supposedly safe confines of marriage, people have issues with tough conversations and the things that need to be said. Sometimes, a large part of this aversion to marital conflict is because of either partner’s inability to listen effectively.

Second, people don’t listen well. There’s more to listening than just sitting quietly and waiting for your turn to speak. Communication issues arise when issues are mis-ommunicated and when a safe space isn’t created to allow grievances to come to light.

Third, people think they are communicating but they aren’t. They’re so uncomfortable with all that genuine and open communication entail that they only dip their toes into the process. This means that half-messages are sent all the time, and nothing is completely understood because people just want to end the process. That’s why being a good listener is important.

Fortunately, there are three easy steps to set you on your path to being a brilliant listener and subsequently, a brilliant conversationalist.This goes beyond talking to strangers–it can help salvage your relationship with your significant other.

“The way you speak contributes to a consistent image of how engaging a person you appear to be.”

When meeting someone new, we’ve all had that moment of “No, thanks,”

It doesn’t really matter who you are or what your goals are. You simply need to know how to make a better first impression. We only get one shot at this until the opportunity is gone. Once that happens, everything else you do or say will be viewed through the lens of that negative or lukewarm impression, and it’s a pit that is extremely difficult to climb out of.

The good news is that it’s not as difficult as you may think. The reason why people make terrible first impressions is that they come into a social situation with a lot of anxiety or fear. If you go into a social situation looking to impress people or prove a point, nine times out of ten, you'll drop the ball. Remove the fear of judgment from your mind and see your first impressions soar. Of course, that’s easier said than done, so in the interim, a set of basic guidelines can cover your base.

Is there anyone that sticks out in your memory as a skilled conversationalist? Nine times out of ten, the reason you were so impressed by these people is because they told marvelous stories.

Conversation is really a set of interesting remarks and related stories, so it’s no wonder that superb storytelling can make your conversation skills skyrocket. It’s a cornerstone of how we actually communicate with others.

The common mistakes people make while telling a story are:

Not getting to the point. Poor storytellers have one thing in common: they talk on and on and really never get to the point. These stories are annoying because they take your attention and waste it—you can waste minutes on somebody that basically doesn't know how to tell a story.

Not using an emotional payload. For an effective story, there has to be an emotional reaction at the end. Otherwise, your story will simply engender a reaction of “So what?” or “Is that it?” and other people would not find your story engaging.

Not painting a picture. Anyone can tell a dry and boring story. All you have to do is describe what happens in steps. You can tell a lousy story when the details are flat, when many of the details are rushed through, or otherwise missing.

Get better at storytelling
Communication

“Remember that the way you end your conversations reflects how good a conversationalist you are.”

A phenomenon that is simultaneously surprising and yet makes complete sense is the recency effect. It states that the most recent of an interaction, activity, event, or person that we are exposed to is what we remember the best.

If we view the brain and memory banks as a stack, then it is completely logical that we can more easily access items at the top of the stack, and things near the bottom of the stack get crushed or replaced.

It’s surprising in a sense because it means that so much of what we do and say is simply invalidated as a result of the limited capacity of our memories. Even if we say or do the most charming of things, it is not guaranteed that people remember it because it isn’t the last impression that people have of you.

It’s an introvert’s party too

“Let your curiosity and thirst for entertainment overcome your exhausted social battery.”

Introverts get an unfair rap in society. Most of the time they are lumped together with the socially awkward or antisocial. We know people whose venn diagram does indeed intersect there, but they are the exception to the general rule.

The textbook definition of an introvert is one who recharges their social battery from spending time alone or otherwise with themselves. It’s pretty simple, actually. If you spend a day out with your friends at a barbecue, what do you feel more inclined to do when you return home? Crash and relax for the rest of the night, or regroup and join everyone else at a club? Introverts would likely answer the former.

So introverts don’t inherently have less of an ability towards conversation than extroverts do – they just have a lesser capacity for it. Unfortunately, life doesn’t often care whether you are an introvert and have used up your social battery for the day. It will require you to push through, regardless of your level of fatigue. Here are some conversation skills specifically designed for introverts who may be in need of just pushing through it occasionally.

Participate in conversations as an introvert
Communication

“Countless friendships have been destroyed by unhealthy and misguided confrontation.”

Confrontation is not a concept that the majority of us are comfortable with, and as a result we usually avoid it for as long as we can. But that just causes resentment and passive-aggressiveness to fester inside until it explodes in a mess of anger and emotion. We all innately know that the best way to address an issue is actually confrontation, but since we usually avoid it, we also don’t know how confrontation works best.

You can engage in a measured way that leads to an effective and efficient exchange of information and view, or you can simply verbally brawl. You have to decide whether you'd rather engage in a productive conversation that leads to a resolution, or attempt to prove your point in the sole pursuit of being right.

The way you approach confrontation can either trigger an emotional outpouring, or a mutually beneficial exchange of ideas. Like with everything else in life, there is an optimal way of proceeding that will make your difficult conversations and confrontations lead somewhere positive.

“The main point of digitally speaking is to make sure that you are conveying what you think you are.”

If we have enough trouble communicating our intentions face to face when we can see someone, just how much of that overall message do you think is lost when we communicate by digital means?

We’re now in an age where much of our daily communication with friends and colleagues is not by actually seeing them. It’s via email, texting, instant messaging, and any number of social media avenues.

While we can debate back and forth on the value of relying on these kinds of communication, and whether or not it erodes our overall ability to communicate effectively, the fact of the matter remains that it is here to stay, and will only grow more prevalent.

This means that we should think about our conversation skills and how to maximize them with digital means, which includes phone, e-mails, chatting, and texting. The dynamics are simply different, and you cannot confuse what works on one medium with what works in another.

“Not everyone has to be the life of the party, but laughter is incredibly disarming.”

Humor is a valuable and powerful tool for communicating about anything because it breaks down barriers. If you can share a laugh, you have connected with that person. Effective humor interaction has been proved to be  beneficial for both sender and receiver. Use of humor in conversations has the potential to facilitate positive perceptions, improve communication and reduce conflict.

But though humor is supremely difficult, it is crucial for daily conversation. Luckily, scientists have actually studied humor and broken it down into small components that we can actually learn to use in daily conversation. More specifically, they have proposed that the vast majority of humor falls into a certain number of distinct patterns and structures.

Have a good sense of humor.
Communication