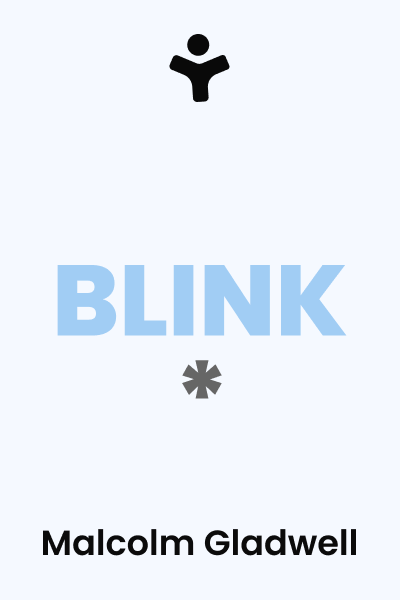 Blink: The Power of Thinking Without Thinking

Blink is a book about the judgments we make about the world in the time it takes us to blink. It is about the inferences we make that we can’t explain and the decisions we make that we can’t justify, although we know we are right, and most of the time, we are! Blink refers to this phenomenon as “thin-slicing” and teaches you how to be aware of it, and use it to your advantage. Every assertion in this book is backed up by studies and scientific research, so don’t be taken aback by some of the more outrageous statements—they’re all facts.

The Statue That Didn’t Look Right

“We toggle back and forth between our conscious and unconscious modes of thinking, depending on the situation.”

There are two ways your brain processes stimuli: The first way is conscious, logical, and definitive; it’s when we think about what we’ve learned, and eventually come up with an answer. The second way is much quicker than the first; it’s when our brains unconsciously pick up on the important stimuli in our surroundings and send us physical messages through indirect channels (e.g., the palms of your hands may begin to sweat slightly).

The part of our brains that leaps to conclusions like this is called the “adaptive unconscious,” and the emotional response it triggers is what we call “intuition.”

“A relationship between two people has a distinctive signature that arises naturally and automatically.”

Give your partner the emotional support they need.
Romantic relationships   3

“What we think of as free will is largely an illusion.”

Priming refers to changing a person’s mindset through the use of different words. For example, if you are reading a text with words that are associated with being old, such as “worried,” “old,” “lonely,” “gray,” “wrinkle,” “bingo,” etc., your brain will unconsciously obsess about the idea of being old, and you will actually begin to act old (you may walk slower, talk slower, etc.).

If you are in a conversation with someone and they use a lot of words that are associated with impatience, such as “bold,” “aggressive,” “rude,” “bother,” “intrude,” etc., your brain will unconsciously be primed to be impatient, and you will be very likely to show impatience when asked to wait for something.

Use the effects of priming to your advantage.
Communication   1

“Sometimes the young black man has an MBA from Harvard.”

Don’t let first impressions fool you. Look at a car dealership for example - car salespeople tend to make snap judgments about potential customers. A teenager may be blown off since, after all, he is a teenager, and probably would not be able to afford a nice car. A car salesperson works on commission, and so wants richer customers who can buy more expensive cars. However, later that night, the teenager could come back with his parents, and purchase an extremely expensive car, and another salesperson would get the commission.

Look beyond your first impressions
Socializing

The Chair of Death

“The truth is that for the most important decisions, there can be no certainty.”

When confronted with something new and unfamiliar, our usual response is to dislike it. It takes us some time to warm up to things that are different than what we are used to. However, when exposed to something unfamiliar, for long enough, we may realize that we misinterpreted our original feelings, and we actually like this new thing!

A Man, a Woman, and a Light Switch

“The face is not a secondary billboard for our internal feelings. It is an equal partner in the emotional process.”

People can mask their emotions with a straight face, but research shows that all basic emotions are always automatically expressed by the muscles of the face, at least for a fraction of a second. Paying attention to someone’s facial expressions will help you figure out how they’re feeling, and thus improve your relationship with them.

When Less Is More

“Truly successful decision making relies on a balance between deliberate and instinctive thinking.”

If you are asked to pick your favorite brand of jam out of 10 different types, it wouldn’t be too difficult for you. But, if you are given a list of criteria with which to rate each jam, and then asked to pick the jam that had the highest ratings, you may find that what was your “favorite” jam in the first test, is now among your least favorites.

Listening With Your Eyes: The Lesson of Blink

A hiring manager, though he loves his wife and daughter very much and wants the best for them, may not hire any women that come in for interviews because to him, women are weaker and more easily distracted. To him, his reasoning is perfectly sound; he is not aware of his bias. He listens with his eyes—he sees a woman and he immediately rejects her—instead of his ears and heart. He does not evaluate the woman on her skills and abilities, only on her gender.

Listen with your heart, not your eyes.
Life philosophy