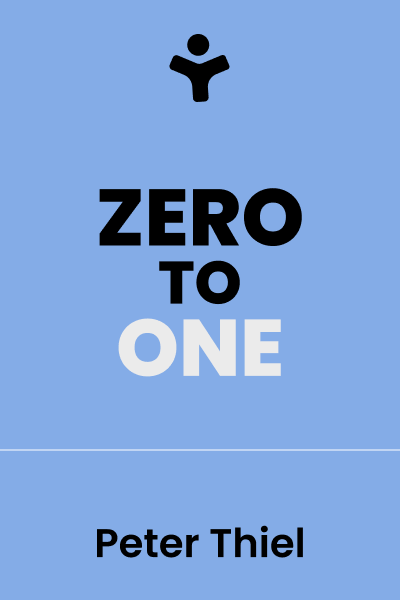 Zero to One: Notes on Startups, or How to Build the Future

There will not be the next Bill Gates, Steve Jobs, or Mark Zuckerberg. Those moments in  history happened only once. This is what it means to go from zero to one.

This book teaches about how to build a company that, instead of competing using similar products, will compete by solving a real problem, and will survive at least 10-20 years.

“Every moment in business happens only once. The next Bill Gates will not build an operating system. The next Larry Page or Sergey Brin won’t make a search engine. And the next Mark Zuckerberg won’t create a social network. If you are copying these guys, you aren’t learning from them.”

The future is not clearly defined, but it’s scary. If we focus only on globalization, it will be an ecological disaster for our planet.

So, globalization is not the solution for the future. Instead, we should focus our energy on technology, on creating new things.

There is one big challenge in creating new things. For corporations, it’s difficult to break through structures to actually have rapid technology development, and for lone inventors, it’s even more difficult. What’s the ideal solution? Inventors (or startups) must work with other people to get things done, and stay small so that technology development actually will happen.

The ‘90s was a great time for all dotcom companies. When the first internet browser arrived in 1992, more and more people started their companies based only on the internet. Such companies as Amazon, Yahoo!, Paypal, and more. However, most of them failed together with the dotcom crash at the beginning of 2000.

This revealed some lessons to startup founders and investors that have become dogma in the silicon valley. The lessons are:

However, the opposite of these lessons might be truer.

Before the bubble, people believed in 0 to 1. After it, they started to believe that 1 to n is safer, so it’s better. But, is it?

All happy companies are different

“Monopoly is the condition of every successful business.”

Most companies have either a monopoly on the market or are in the area of perfect competition.

Perfect competition means, that the company competes on the same terms with many other companies. When a new company emerges, the market, then the profit of all of them, shrinks. Then, a company on this market might run out of money and the market again goes back to the same plane. It’s called perfect because in the long term, with perfect competition, there is zero profit.

In contrast to perfect competition is the monopoly. Let’s define a monopoly here, as a company, operating in such a market, that its position is not in danger and its profit is high. Google is such a company. A British restaurant in Palo Alto is not. You could say, that the British restaurant has no competition because there is not another one in Palo Alto. And if you define the monopoly market as this, that would be true. But the fact is, that this restaurant is competing with other types of restaurants in Palo Alto. So, it’s not a monopoly.

Is a monopoly good? Generally, it’s good because it allows companies to have a high profit, that they can invest in other innovative products, and allows them to have long-term plans. Such long-term planning is not possible in a competitive market. A monopoly is good for innovation and technological progress.

But what do you have to do in order to have a monopoly? Your company must be different. All companies with strong competition are the same, and all great companies are different.

The ideology of competition

“Competition means no profits for anybody, no meaningful differentiation, and a struggle for survival.”

When there are two people fighting, usually there is a third person who is gaining from the fight. A good example from history is the competition between Google and Microsoft. They are competing on many products, like text processors or search engines. But the biggest winner of the competition is Apple. The valuation of this company became larger than the other two combined.

We learn to compete early in schools. We are told that we have to be the best to get a good job and be successful. However, is that really so healthy? As we said in the last chapter, in the perfect competition game, there is no profit. Profit occurs when there is a monopoly.

In the 90s, when Peter Thiel was inventing PayPal, there was another company, only 4 blocks away, that was doing exactly the same thing. It was X.com of Elon Musk. They were competing with each other hard, working as much as was possible. Luckily, they decided to meet on neutral ground and establish a 50-50 merger. Thanks to this decision, they survived the crash of the dotcom bubble and created a successful company.

In most cases, competing does not even make sense, as our goal should be building great, new products, not copying what already exists.

“You must study the endgame before everything else.” - José Raúl Capablanca, chess grandmaster

Many companies look at short-term growth, not at long-term ideas on how to thrive on the market. But having a monopoly is not only about getting the majority of the market but also about staying there.

There are four characteristics of companies that were successful in getting a monopoly. Check them out below.

There is one more thing. It’s not just about being the first mover, but about being the last mover. The first mover is someone who enters the undiscovered market. The last mover is the company that dominates the market and gets it all. There were other search engines before the creation of Google, but it’s Google who dominates the market. And in order to be the last mover, you must first dominate a small niche, and then scale it up from there, towards your long-term vision. Important: start with the end in mind.

Set up a successful framework for your company
Startup development

You are not a lottery ticket

“The most contentious question in business is whether success comes from luck or skill.”

Americans live in an indefinite, optimistic world. It’s a strange time to be in, because they have no idea what the future will be, but they are optimistic about it. The consequences of that are that long-term plans are dangerous. It’s better to make short-term plans and iterate slowly.

The optimistic mindset, is it good or bad? In the 1950s - 1960s, America lived in definite, optimistic times. There were big plans, and everyone worked towards them. Impossible became possible.

We should aim for doing our business in a definite, optimistic time. Make a concrete, long-term plan, and work towards it. Just like Apple did. Apple did not iterate their products slowly, releasing hundreds of versions, instead, Steve Jobs envisioned what the products of Apple should be, and he developed them with all the details.

Be optimistic with your business.
Startup development   10

Did you hear about the Pareto Law? Economist, Vilfredo Pareto discovered that 80% of land is in possession of 20% of the people. And ever since, people started to notice that this law works in many other areas. It applies to the investment in startups. Disproportion is even higher here. Something like 10% of startups will give 90% of their return on investments to their investors. Investment in new companies is a high risk, which means there is a high probability to lose money. However, if the investment is successful, the return on the investment can be huge. And this is generally the rule that the best investors are following. They are looking for startups, that have an opportunity to repay all their money they previously invested in other failed startups. Some of the investors are investing only in high potential startups, that can grow more than 100x.

What does that mean for you? Investing your time in one startup that might not make 10x of your investment of time is very risky. Unlike an investor, you cannot diversify your portfolio. You cannot invest your time in 10 different startups - that would not make any of them successful. You can do differently. Even if you are a genius, maybe it’s better to join a startup that has a very high growth potential. It’s better to get 0.1% of a very successful company, instead of 100% of a failed startup.

Invest only in the high potential startups.
Investing

“What valuable company is nobody building?”

Did humanity already solve all the hard problems? Most humans act like they have. An extreme representative of this theory is Ted Kaczynski. He believes, that in order to be happy, we need goals, and there are 3 types of goals:

So, in order to be happy, we need goals that are hard, but most of the problems that we encounter nowadays are either very easy, or impossible to solve. And this is deeply unsatisfying. Kaczynski so deeply believed in this that he wanted to destroy institutions so that humanity can start everything over again.

If we believe, that there are no more secrets, that everything is discovered, then there is no need for progress. In order to make progress, we need to focus on discovering new things. And the truth is, that there are many more secrets left to find. Companies that are the most successful, find out these secrets, like Airbnb, Uber, or even Facebook. They knew something that others didn’t, and they built their businesses on top of those secrets.

Build your company based on a secret.
Startup development   1

“A startup messed up at its foundation cannot be fixed.”

The success of a startup depends highly on its foundations. Or, more precisely, with whom you work, who has the shares, what agreement you have with your partners and workers, etc. Opening a company with a person is like a marriage. If you don’t choose wisely, you might break up soon, and the whole venture will fail.

In order to create strong foundations for your company, there are a few rules you should follow. Check them out down below

The mechanics of mafia

“The best startups might be considered slightly less extreme kinds of cults.”

The perfect vision of a company is where people love their work, where they can have fun together, hang out, and it feels like their home. However, can you really build a strong business with that kind of approach? All these things may attract more talents to join your company, but actually, you don’t want people that are attracted by shiny objects.

The better strategy is to build some kind of cult. To attract people that put the company on top of their priority list because they are part of something much bigger and more important than just having a job. It’s not about building a company culture. It’s about creating a cult, or, as Peter Thiel calls it, a mafia.

If you build it, will they come?

“Even though sales are everywhere, most people underrate its importance.”

Nerds would wish that there is no salesman. In a perfect world, the nerds would build the business, and consumers would use it. But where is the distribution system? Over 3 million Americans work as salesmen, but in fact, if we include other professions, we find that many more people are “selling”. Sales are crucial for company success. You can build a great product, but with bad marketing, you have no chance to succeed.