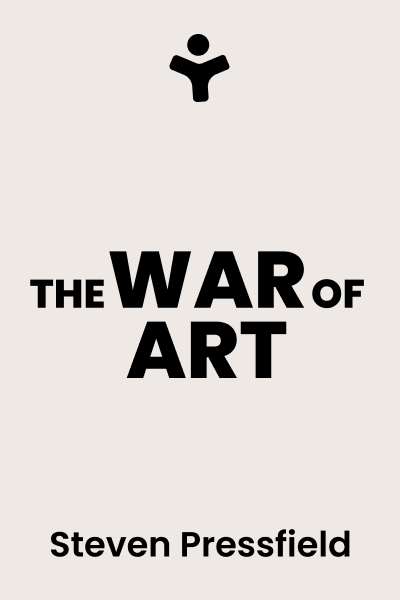 The War of Art: Break Through the Blocks & Win Your Inner Creative Battles

Every artist has faced those dreaded creative blocks that kill inspiration. In The War of Art, author Steven Pressfield asserts that these creative blocks occur due to a force known as Resistance, which is constantly working against us to ensure we do not achieve our full artistic potential.

The War of Art further details what exactly Resistance is, the effects it has on us, and most importantly, how to combat it by channeling our inner creative genius. No matter what type of art you create, this book will help you establish the habits and mindset you need to say goodbye to creative blocks forever!

“Most of us have two lives. The life we live, and the unlived life within us. Between the two stands Resistance.”

Resistance is what stands between what you want to achieve, and what you are actually achieving. Everyone experiences Resistance - it is the most toxic and common force on the planet. It is often difficult to pinpoint as it seems like an external force. For example, we may attribute it to our spouses, kids, or bosses placing certain restrictions on us. However, it is important to remember that Resistance comes from within; no one is keeping you from achieving your dreams except yourself.

Resistance is invisible, insidious and implacable. We are rarely conscious of its presence, and yet , it is constantly lying to you. It is making deals with you to keep you from achieving your dreams. It is fueled by fear and actively works towards keeping you from evolving to a higher stage morally, spiritually, ethically, or otherwise.

The most common activities that elicit Resistance are: the pursuit of art or education in any form, entrepreneurship, sticking to a health or spiritual regimen, overcoming addiction or dropping a bad habit, an act of political, moral or ethical courage and committing your heart (whether to a person or an ideal).

Become aware of Resistance in your daily life.
Mindfulness   1

Use Resistance as a guiding force.
Life philosophy   6

“It is one thing to study war, and another to live the warrior’s life” - Telamon of Arcadia, mercenary of the fifth century B.C.

Follow the traits of a professional artist, not an amateur one.
Self-management

“The most important thing about art is to work. Nothing else matters except sitting down every day and trying.”

The invisible, abstract, psychic forces that support and sustain us in our journey toward ourselves can be referred to as muses and angels. These forces are your allies against Resistance. They will help you become who you were born to be in spite of Resistance.

According to Greek mythology, there are nine Muses, who are daughters of Zeus and Mnemosyne (memory). Their purpose is to inspire artists - each Muse is responsible for a different art.

Our psyche can be split into the Ego and the Self - The Ego is our conscious brain while The Self is our unconscious, where our dreams and intuitions come from. Angels reside in the Self (unconscious) while Resistance resides in the Ego (conscious). When you seek the Self, whether through fasting, prayers, vision quests, etc, you will gain inspiration from a source deeper and more powerful than the physical (ie. the Ego).

Be a territorial artist, not a hierarchical one.
Artistic creativity   2