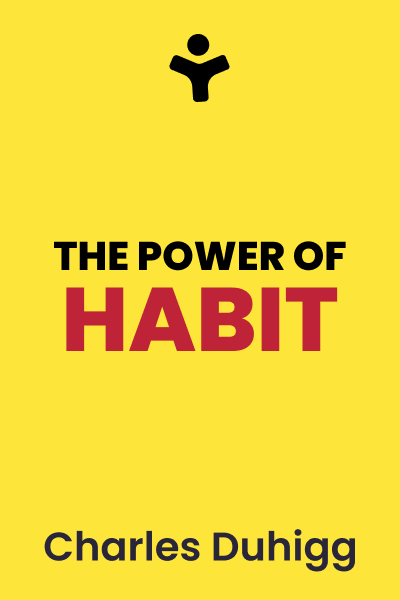 The Power of Habit: Why We Do What We Do in Life and Business

This book describes how habits work in our lives and how to make use of them. A lot of people have changed their lives by focusing on changing their habits.

The most important principle to remember is that a habit is made up of three elements: cue, routine, and reward. Keep this in mind while progressing through this book.

The Power of Habit has many practical elements that can be employed when we want to change bad habits and create new ones. Bear in mind that you cannot remove habits from your life; you can only change them. The cue and reward stay the same, and the routine is replaced.

We used a big chunk of knowledge from The Power of Habit in designing this mobile application! Using this app is meant to be the keystone habit in your life. You will learn more about it later, as you progress through our habit ideas.

“Habits can be changed, if we understand how they work.”

In the brain, we have a nub of neurological tissue known as the basal ganglia. This golf-ball-sized part of the brain is responsible for storing our habits. It recalls and acts on them. This mechanism works independently of the rest of the brain, so that we are able to execute our routines without thinking.

Habits emerge because the brain wants to save effort. The brain, instead of analyzing the situation and thinking about behavior, can simply execute a routine. This gives the logical part of the brain more space for other important things.

The habit loop has three steps, and the first one is a cue. It’s a trigger that tells your brain to start executing a habit. Then there is a routine. It can be physical, mental, or emotional. And the last step is a reward. This gives the brain information about whether the routine is worth remembering in the future.

The most important thing to remember about habits is that our brains can’t tell the difference between good and bad habits. As long as there is a reward, the habit will remain. The brain cannot recognize that sitting on the couch and watching TV is a bad habit, and physical exercise is a good habit. Once we establish a habit, it stays strong, and it’s very difficult to break. But by using the same rule, we can learn to establish new neurological connections and create good habits such as refusing donuts or going jogging.

Studies show that a lot of decisions in our lives happen without the involvement of our logical minds. They are automatic. This means that the habits in our brains influence how we act, often without our realization.

Sometimes we can establish habits consciously, but many of them emerge without our permission. For example, families don’t intend to eat fast food on a regular basis. What happens is that a once-a-month pattern slowly becomes once a week and then twice a week.

How to Create New Habits

“Cravings are what drive habits. And figuring out how to spark a craving makes creating a new habit easier.”

Habits are very powerful because they create neurological cravings. This craving is at the core of creating a new habit. For example, after eating a meal, we can feel that our teeth are dirty. That’s the cue. And we crave to make them feel clean and fresh. That’s the reward. Once there is a cue; we crave the reward.

Let’s look at another example: how to begin jogging every morning. First, choose the cue. It’s essential that the cue is simple, like lacing up your sneakers before breakfast. There must also be a reward, such as the sense of accomplishment from recording your miles, or the endorphin rush you get from it. However, the cue and reward are not enough. The habit is established when your brain starts expecting the reward (the feeling of accomplishment or the endorphins). When the cue triggers a craving for the reward to come, the routine becomes automatic.

“That’s the rule: If you use the same cue, and provide the same reward, you can shift the routine and change the habit. Almost any behavior can be transformed if the cue and reward stay the same.”

You cannot truly extinguish bad habits. Habits are strong, and when the cue appears, your brain will always crave the reward. However, what you can do is replace the routine. The cue and the reward have to stay the same, but the routine does not.

This is called a Golden Rule. This rule has helped with treatments for alcoholism, obsessive-compulsive disorder, and hundreds of other destructive behaviors.

You can change any bad habit. The key, however, is to identify the cue and the reward. Then find a new routine that will give the same reward. For example, you may smoke because it provides a burst of stimulation or a way to socialize. If you need stimulation, you can grab some coffee in the afternoon. This simple change will increase the odds that you’ll quit smoking successfully.

Another element, probably the most important in breaking bad habits, is changing your beliefs. It’s not quite understood how this works, but studies show that in order to create lasting transformation, one must believe that the transformation is possible. For example, if you want to quit smoking, first, you must start believing in yourself—that you can do it, that you can really break the bad habit.

Beliefs most often emerge only with the help of a group. If you want to break a habit, find a support group or at least someone you can talk to about it every day.

Identify the good and bad habits that you are not aware of.
Mindfulness   2

Change (or create) any habit by following these four steps.
Overall health   2

“If you focus on changing or cultivating keystone habits, you can cause widespread shifts.”

Some habits have the power to start a chain reaction. Some habits are better than others. These habits are “keystone habits.” A keystone habit starts a process that changes everything. Success does not depend on many small things but instead relies on identifying a few priorities.

For example, if you want to lose weight, a good habit would be writing down everything you eat. This is a great keystone habit, because you will increase your awareness of your food intake. Over time, this will drive many changes in your life. You will not “go on a diet,” but you will change how you eat.

Keystone habits are like small wins. Accomplishing them is not a big deal. In fact, it’s quite easy. But this small win will drive bigger wins over time.

A great keystone habit for you can be using this app daily. Open it, and check it out. This small win every day will drive other changes in your life.

Change your life by establishing a keystone habit.
Self-compassion

Define the keystone habit in your organization in order to improve the grit of employees.
Company organization   7

The Habit of Success

“This is how willpower becomes a habit: by choosing a certain behavior ahead of time, and then following that routine when an inflection point arrives.”

Willpower is the most important keystone habit for individual success. Studies show that it’s more important than IQ and other factors. People with high willpower get better grades in their classes and gain admission into more selective schools. They spend less time watching TV and more time doing homework.

The best method to strengthen willpower is to make it a habit. It might look like people with great self-control aren’t working hard. It’s because they made it automatic. Their willpower occurs without them thinking about it.

Willpower is like a muscle. You can exercise it and make it stronger. But when you use it too much, it becomes tired, and you lose your ability to exercise willpower again until you have time to rest. There is a finite amount of willpower at your disposal each day.

Another important thing to note is that you don’t use your willpower when you plan ahead and determine what you will do in certain situations. For example, if you work at Starbucks and must serve an angry customer, how will you deal with the situation? If you don’t have a plan of action in advance, you will use a huge amount of your willpower dealing with the situation, and you may get emotionally tired. This will change your mood. Here is a better method: Plan ahead exactly what you would do in such a situation, and when it happens, you will act on autopilot. It will not affect your energy level as much, and most likely, you will not get emotional.

Plan ahead to determine how you will react in critical situations.
Organization   3

Teach your child how to plan ahead by asking simple questions.
Raising children   1