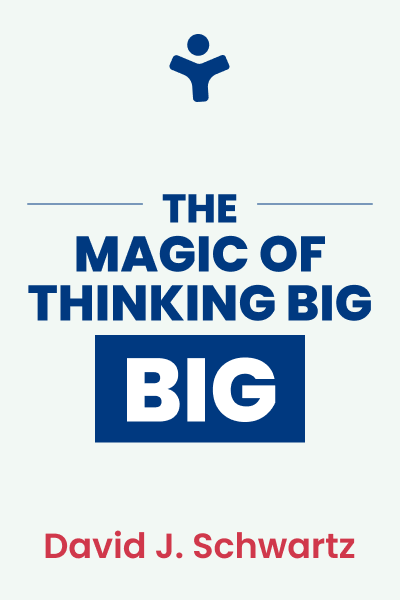 The Magic of Thinking Big

You do not need to have innate talent to achieve brilliant success and satisfaction. What you need is to understand how you need to think and what you need to do in order to achieve your goals. This book will not only inspire you, but will give you the tools to change your life for the better. It will provide a carefully designed plan for getting the most out of your job, your marriage, your family life, and your community.

Believe You Can Succeed And You Will

Believing in yourself is the first step to success. Believe you can achieve something, and you can, it’s that simple. The problem is, only a few people have this belief in themselves. As a result, only a few people end up achieving their goals.

You may think it sounds like nonsense to think you can achieve something just by saying, ‘I can do it.’”

To understand the power behind this statement, you must first differentiate between believing in something and wishing for it. For example, you cannot become successful by doing nothing and simply wishing for your dreams to happen. You can, however, achieve success through belief.

There is nothing magical or mystical about the power of belief. It’s simple - the “I’m-positive-I-can” attitude generates the power, skill, and energy needed to do what you need to do. When you truly believe that you can do it, the next steps become clearer. Powerful belief triggers the mind to figure out ways and means.

Develop belief in your ability to succeed
Life philosophy   143

Cure Yourself Of Excusitis

“99% of the failures come from people who have the habit of making excuses.” - George Washington

All the excuses made by the mediocre fellow could be, but are not, made by the successful person. You will find that the more successful the individual, the less inclined he is to make excuses.

Like any disease, excusitis gets worse if you do not treat it properly. Once the victim of this failure disease has selected a “good” excuse, he sticks with it. Then he uses the excuse as an explanation for himself and others as to why he is not moving forwards. The more frequently he repeats it, the more convinced he becomes that this invented excuse is the real reason for his lack of success.

For example, let’s say you wanted to learn skateboarding, but you failed repeatedly. After multiple tries, you think that your bad luck is the reason for your failure. Now, every time you try something and fail, your mind instantly reminds you it is because of your bad luck. By doing this, you ignore the real reasons for your failure and end up not improving yourself.

“Do the thing you fear, and the death of fear is certain.” — Ralph Waldo Emerson

Fear is a powerful force because it prevents people from getting what they want out of life. It is real, and we must recognize it exists before we can conquer it. Fear of all kinds and sizes is a form of psychological infection. We can cure a mental infection the same way we cure a body infection—with specific, proven treatments.

The first step to cure fear is to understand that confidence is always gained and developed. No one is born with innate confidence. The people you know who radiate confidence, who have conquered worry, who are at ease everywhere, have all worked to gain their confidence.

Action cures fear. When you take action despite your fears, your brain gets used to the activity. Over time, this enables you to build your confidence.

How To Think Big

There are three common things that stop people from thinking big:

How To Think And Dream Creatively

“Capacity is a state of mind.”

There is a common fallacy about the meaning of creative thinking. People believe that science, engineering, art, and writing are all the creative pursuits there are. Most people associate creative thinking with things such as the discovery of electricity, the writing of a novel, or the development of color television.

However, creative thinking is not something restricted to specific occupations. In fact, it’s something we can do in everyday life. All you have to do is to think in a more creative manner about how you can improve the different things you do.

For example, you could figure out ways to simplify record keeping, or keep your children occupied constructively, or help your employees enjoy their work more.

Adopt a creative approach towards everything
Creative thinking

“You are a product of your environment.” - W. Clement Stone

Your mind reflects what your environment feeds it, just as your body reflects the food you feed it.

You are a product of your environment; it shapes you and makes you think the way you do. The person you are today, your personality, ambitions and present status in life are largely the result of your psychological environment.

The person you will be depends almost entirely on your future environment.

Get The Action Habit

“Nothing comes merely by thinking about it.” - John Wanamaker

In every field, there is a shortage of top-flight, expertly qualified persons to fill key positions. There is honestly plenty of room at the top, and not enough people to fill all the spots. There are many almost-qualified people, but they are often missing the secret ingredient to success: the ability to get results.

Excellent ideas are not enough. An okay-idea that was fully developed is always better than an amazing-idea that ends up dying because of no action taken. Think about it. Everything we have in this world, from satellites to skyscrapers to baby food, was ultimately just an idea that has since been acted upon.

Turn Your Defeat Into Victory

“Defeat is only a state of mind, and nothing more.”

People who have low levels of financial success differ in age, religious faith, education, background, and so on. However, one thing is common among them: each one has been defeated, whipped, and beaten. Each one has encountered circumstances that conquered him. Now, each one is desperate to present their reasons for what wrecked their dreams.

When we move up and look at people with medium levels of financial success, we see that they too have similar reasons for their shattered dreams. They often try to explain away their mediocrity, instead of addressing and solving it.

It is only when we look at those who have achieved high levels of financial success that we find those who got back up when they fell down. These people have experienced every difficult situation you could ever describe, but they refused to let it keep them down.

When the people with low levels of success got knocked down, they could not face their obstacles and simply settled for less.

When you are on the battlefield of your life, you’ll face several problems and obstacles. It is simply not possible to achieve high-level success without meeting opposition, hardship, and setbacks. However, use these setbacks to propel you forward instead of allowing them to hold you down.

Turn your defeats into victories
Growth

“A Leader is one who knows the way, goes the way and shows the way.” - John C. Maxwell

No one can accomplish anything alone. Everyone needs teamwork and support from others to reach high levels of success. Ask any successful person out there - none of them got to where they were all by themselves. No one reaches high levels of success without the lift of the people working beside him.

For example, Microsoft is one of the most valuable enterprises and the largest IT company in the world. It did not win this title with the hard work of only one person. There were multiple programmers, engineers, designers, and MBAs who worked hard to help the company achieve success and prosperity.

Attaining high-level success requires the support and the cooperation of others. Gaining this requires good leadership abilities, including the ability to push your team to produce work beyond what they thought they were capable of. Success and the ability to lead others go hand in hand. The social influence of leaders cannot be understated - they are the true driving force of their team.