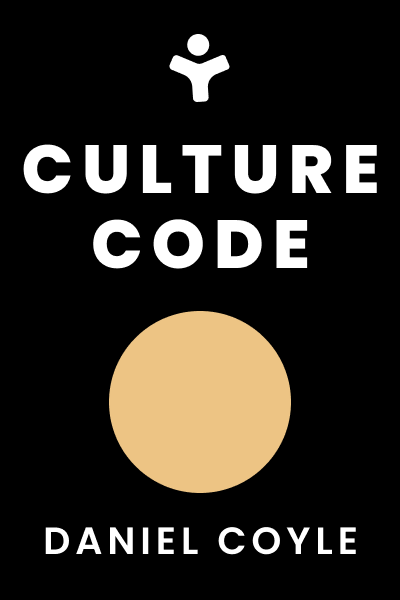 The Culture Code: The Secrets of Highly Successful Groups

The Culture Code is an insightful analysis of the secrets behind highly successful groups. It shows why some teams work so well together to achieve great things while others fail. The book also provides you with tips on how you can create a cohesive and motivated team founded on safe connections, shared vulnerability, and purpose.

For a long time, we believed that group performance is dependent on things like experience, skill, and even intelligence. We’ve also assumed that a successful group must have a strong leader who takes charge, barks orders, and lays out a strategy for their followers. However, research shows that a successful group is based on the strength of the connections between its members and how safe every individual feels within the group.

The leader focuses their energy on creating an environment where everyone feels connected to each other, and it is this sense of safety that then enhances the group’s performance. But how is this culture created?

One of the most obvious aspects of a high-performance group is the subtle behavioral patterns of interaction. Members refer to each other using terms such as “brother” or “sister” rather than “teammate” or “friend.” Their communications are also defined by lots of eye contact, few interruptions when speaking to each other, and close physical contact when working together. These behaviors that create a strong cohesive unit in a group are referred to as belonging cues.

Belonging cues are subtle signals that people send to reassure each other that they are wanted and valued within a group. We know that our ancestors lived in tribes as a way to share scarce resources and protect each other from the many dangers around them. Long before the development of language, they had to rely on specific signals from each other to determine whether they were accepted within the tribe or not. Belonging cues were thus used to show that your position is secure within the tribe and you should focus on helping the group survive.

This cognitive mechanism is still active to this day. In highly successful groups, people are constantly sending each other a stream of belonging cues that say “You are safe here.” This causes the amygdala to switch from worry mode (what do I need to do to survive?) to social connection mode (how can I create a tighter bond with my group?).

These belonging signals must be continually reinforced every time there is an interaction between group members. The moment an individual doesn’t feel psychologically safe within a group, their performance automatically reduces because they start worrying about their social position. Therefore, to enhance team performance, people need to constantly receive signals that the group cares for their well-being.

Without a doubt, the person who ultimately plays the most crucial role in creating a culture of belonging is the group leader. A good leader should provide candid and uncomfortable feedback without devaluing someone. They must send out as many belonging cues as possible during every interaction so that the rest of the group learns to do the same. Doing so enables the group to develop a strong sense of safety and connection. Building safety is truly a skill with a steep learning curve, but the benefits are well worth the effort.

“Exchanges of vulnerability, which we naturally tend to avoid, are the pathway through which trusting cooperation is built”

If you watch a team of Navy SEALs moving through a training course, you’ll notice the high level of cohesive and fluid actions. Like a school of fish navigating its way in the ocean, the group appears to think and move as a single unit. It appears as if the members of the group have an innate trust in one another that allows them to cooperate more effectively. Once a group has become a cohesive unit, it then needs to convert that sense of safety into trusting cooperation. But how does it achieve this?

One effective way to create trusting cooperation is by allowing everyone in the group to offer their honest opinion without fear of reprisal. For example, Navy SEALs hold meetings after every mission or training session to review everything that went right and wrong. They critically examine what every soldier did or failed to do. These sessions can often get painfully raw and heated. But by openly pointing out and admitting their flaws, the group can figure out the underlying causes of a problem and how to improve. It is these intentionally painful interactions that allow people to be vulnerable with each other, thus deepening the trust and cooperation within the group.

We often think of vulnerability as some touchy-feely way of being, but this is not an accurate perspective. Vulnerability is about letting others know your weaknesses and how much you need their help to overcome them. This kind of behavior in a group setting encourages everyone to set aside their insecurities and trust each other. Once someone sends a signal of vulnerability, a second person needs to pick up on it and do the same. This creates a loop that gradually normalizes sharing of vulnerability within the group.

A vulnerability loop enables the team to focus on the collective mission rather than on themselves. A team member can go out of their way to support a colleague because they know that they would reciprocate. However, sharing vulnerability is not an easy thing to do, especially if the leader hasn’t embraced the concept yet. Most people won’t challenge a superior’s idea even if they know that the idea is flawed. Therefore, a leader should be at the forefront of creating a culture where people feel comfortable asking each other questions, even if it means challenging the leader himself.

Create a Sense of Purpose

It’s one thing to send signals of safety and vulnerability within a group to encourage cohesiveness and cooperation. But at some point you have to contend with the question—what are we doing all this for? One of the things that separate successful groups from the rest is how they communicate their values and purpose. Elite teams leave no doubt about what they stand for. They constantly remind everyone within and outside the group about why they do what they do. But how do they create and sustain this sense of purpose?

Successful cultures have perfected the art of relentlessly sending small but vivid signals that connect the present moment to a future ideal. These signals act as beacons that continually remind everyone in the group about where they currently are and where they are going. These signals can be in the form of a story, an ideology, or even regular training sessions.

For example, a group of call center workers was struggling to help raise money from university alumni. More than 93 percent of all calls for donations were rejected and the workers were seriously unmotivated. These donations were often used to provide scholarships for students. The university tried to incentivize the workers by offering all kinds of prizes but nothing worked. The university then decided to ask some of the scholarship recipients to talk to the workers about how the donations and scholarships had helped change their lives. A month later, donations had risen by a whopping 172 percent. Through their personal stories, the students had painted such a vivid picture of just how important the donations were to their future. This sent a strong signal to the call center workers that their job had a purpose that was greater than they originally thought.

The mistake that unsuccessful teams make is assuming that everyone understands their role and thus there’s little need for regular coaching or exchange of feedback.  They may even argue that people don’t need to be constantly reminded about the importance of their work. But what they are forgetting is that the value of these signals isn’t in the redundant information. It is in their ability to consistently create linkages between team members and the group’s shared goal. Without these signals, people lose sight of the need for cooperation as well as the reason for the existence of the team.