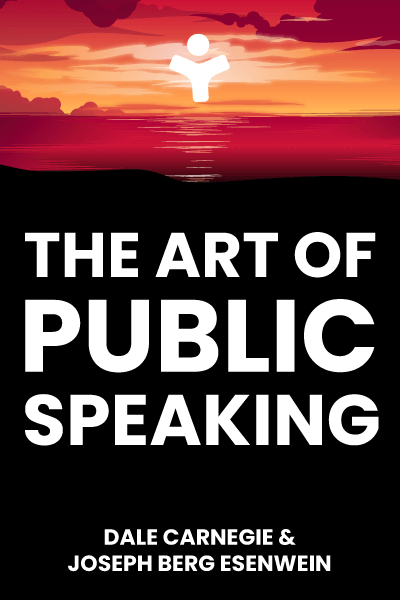 The Art of Public Speaking

In The Art of Public Speaking, the author provides practical techniques for becoming an effective speaker. He emphasizes the need for thorough practice and subject-mastery in building the self-confidence required. The book challenges us to maintain a positive outlook by regarding ourselves not as exhibits, standing in front of people, but as messengers with a message worth delivering. It also highlights the importance of holding private conversations effectively, as they are often good opportunities to practice public speaking.

“Whatever form you choose, do not be so weakly indifferent as to prefer the easy way — choose the best way, whatever it costs you in time and effort.”

There are four fundamental methods of delivering an address: reading from a manuscript, committing the written speech and speaking from memory, speaking from notes, and extemporaneous speech. All others are modifications of one or more of these.

It’s impossible to say which method is best for all speakers in all circumstances. In deciding for yourself, you should consider the occasion, nature of the audience, the character of your subject, and your own limitations of time and ability.

Certain occasions call for reading from a manuscript, such as the opening of Congress, presenting a sore question before a deliberative body, or a historical commemoration. In these settings, the most important thing is to express certain thoughts in precise language —language that must not be either misunderstood or misquoted.

The most popular method of delivery is speaking from notes, where the speaker uses an outline with points as a guide. But the most ideal is speaking extemporaneously, without any notes whatsoever. This method draws you closest to your audience and is the favorite amongst the most efficient speakers.

“Face an audience as frequently as you can, and you will soon stop shying.”

The best way to get rid of the fear of public speaking is to speak in front of an audience over and over again. Continuous practice is extremely helpful and, like learning to swim, taking the first plunge is very important. It’s alright if you suffer from stage fright at first. Just focus more on your message and less on yourself.

If a theater caught fire and it was your job to go in and warn the audience, you’d rush to do so without any self-consciousness. The importance of your message would drive all stage-fright out of your mind as you focus on the value you’re adding to your audience.

Preparing your message ahead of time also helps. If you go before your audience without any preparation or previous knowledge of your subject, you’d be self-conscious. It’s best to know what you’re going to talk about and how you’re going to say it. Know your subject better than your listeners do, and you’ll have nothing to fear.

Speaking efficiently means speaking in a way that makes it easy for your audience to both hear what you're saying and respond accordingly. This requires that you draw them in and keep them engaged throughout your delivery. To do this, you must avoid being monotonous.

When we speak casually to those around us, we sound natural. We use inflections, pause for effect, pace ourselves, change our tones and pitches from time to time, and even use force to emphasize words or phrases we want them to respond to. While speaking casually, we typically think about what we’re about to say, and how we want to say it, before letting it out.

When it comes to public speaking, we’re always tempted to speak first before we think, most especially if we’re reading a written speech. This can make us sound unnatural and monotone. To draw our audience in, and keep them engaged, we must consciously incorporate the tools of natural speaking into our delivery by using emphases when needed, changing our tone and pitch from time to time, pacing ourselves, and pausing occasionally for effect.

The Power of the Voice

“But a good voice, well handled, is not only an effective possession for the professional speaker, it is a mark of personal culture as well, and even a distinct commercial asset.”

Speaking is 90% voice work. A rich, correctly-used voice is the greatest physical factor of persuasiveness and power. Even greater than the effects of reason.

The secret of a good voice is relaxation. The airwaves that produce the voice result in a different kind of tone when they strike against relaxed muscles than against constricted ones. When speaking publicly, therefore, never force your tones. Always be at ease. Think of your voice as a delicate instrument that you must handle with care. Free your throat from strain. Don’t make your voice go, let it go.

Practice relaxation before you speak. There are exercises that’d help the muscles of your throat to relax. These include breathing from your diaphragm, yawning while speaking, humming, and hanging your head low while swiveling your torso. When speaking to an actual audience, avoid looking down on the floor. Raise your head to allow your voice to be audibly directed toward them.

Develop the carrying power of your voice
Public speaking

The Truth About Gesture

“Gesture is really a simple matter that requires observation and common sense rather than a book of rules.”

A gesture is an outward expression of your inward condition. It’s the effect of a mental or emotional impulse struggling for expression through physical avenues.

As a speaker, if you have thoughts and emotions welling up within you, you won’t have much trouble making gestures. Your only concern would be directing them properly. However, if your enthusiasm for your topic doesn’t give you a natural impulse for dramatic action, you won’t have many gestures to display. And it’s best not to force them out. Focus on developing an affinity for your topic instead, or choose a different one.

The purpose of gestures in public speaking is to carry your thoughts and feelings into the minds and hearts of your audience. They do so by emphasizing your message, interpreting it, expressing it in action, and striking its tone. They include all physical movements, from facial expressions and the tossing of your head to the expressive movements of your hand and feet.

Gestures must be natural, not forced. They have to be used in such a way that your audience isn’t distracted by them but drawn into the absorbing importance of your idea.

“If you wish to influence your audience through suggestion, if you would have your statements accepted without criticism or argument, you should appear in the light of an authority —and be one.”

The purpose of making public speeches is not only to inform an audience but also to influence them to action. A salesman makes a presentation because he wants you to buy his product, and he cares that you have enough information about it first.

In public speaking, you can influence your audience through exposition, description, narration, argument, or pleading. Ideally, you want to combine all forms in one presentation. The American explorer, Robert Peary was good at this. In his lectures on polar discoveries, he used exposition to explain the instruments used for determining longitude and latitude, description to paint a picture of his equipment, narration to tell of his daily adventures, and argument to support some of his contentions.

To be most effective in influencing your audience, you must develop some level of authority first. People are generally more open to suggestions from those they hold in high regard; those who exude much confidence. The best way to achieve this is to know, understand, and be able to explain your subject matter thoroughly.

“There is a sense in which the ability to converse effectively is efficient public speaking, for our conversation is often heard by many, and occasionally decisions of great moment hinge upon the tone and quality of what we say in private.”

Although conversations are usually private, they often serve as good preparations for public speech. Therefore, mastering the art of effective conversation can launch you into your career as a leader and effective speaker.

Most world-moving speeches are made in the course of conversation. Socrates taught his great truths not from public rostrums, but in personal conversations. Conferences of diplomats, business-getting arguments, decisions by boards of directors, and considerations of corporate policy are usually the results of careful, though informal, conversations. And they end up influencing the political, mercantile, and economic landscapes of the world.

During conversations, it’s important to retain self-control. Whether in light social converse or around the dining table, it’s vital to keep yourself in check and refrain from rambling on about yourself, or the ills of another person’s character. Also, remember that all hints on public speaking — poise, alertness, the precision of word, clearness of statements, and force of utterance — are equally applicable to making conversation.