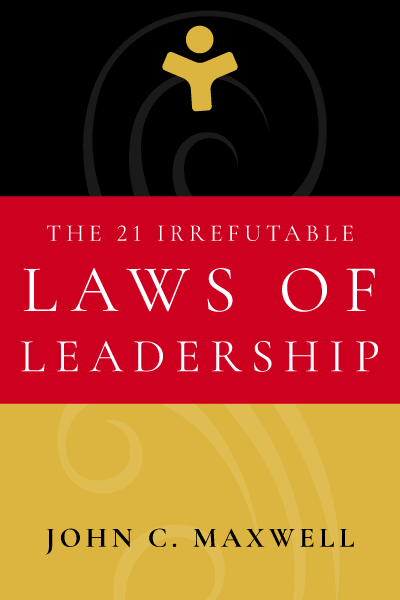 In The 21 Irrefutable Laws of Leadership, the author combines insights learned from over thirty years of leadership experience with observations from the worlds of business, politics, sports, religion, and military conflicts and distills them into a handful of principles for effective leadership in any sphere of life. The book encourages us to view leadership as an opportunity to add value to others by helping them meet their needs rather than as a positional advantage to enrich ourselves. It also stresses the importance of leaving a lasting legacy by empowering those who follow us to become leaders themselves.

Leadership is Nothing But Influence

“If you don’t have influence, you will never be able to lead others.”

Leadership is often misunderstood. When people hear that someone has an impressive title or an assigned leadership position, they assume that they are a leader already. This can be true sometimes, but titles don’t mean much when it comes to leading.

If you watch the dynamics between people in just about every aspect of life, you’ll see that some people lead while others follow, regardless of their titles and positions.

True leadership can’t be awarded, appointed, or assigned. It comes only from influence, and that must be earned. People will follow you based on the relationships you’re able to build with them, the knowledge you possess, your past successes, and your ability to walk in their shoes.

Who You Are is Who You Attract

“If you want to attract better people, become the kind of person you desire to attract.”

Effective leaders are always on the lookout for good people. They understand that shaping their organization’s culture depends not only on who they are and what they do but also on who they surround themselves with. And so, they typically look for those who share common ground with them in attitude, background, values, energy, giftedness, and leadership ability.

Sometimes, as a leader, it’s necessary to recruit people who are different from you. But those aren’t people you will naturally attract. Attracting people unlike yourself requires a high degree of intentionality. To succeed at it, people must believe in you, and the vision you share must be compelling.

Developing stronger character at each stage of your leadership journey is the only way to ensure that only the best people are drawn to you and your organization, and that those who oppose your views still hold you in high regard.

Trust is the Foundation of Leadership

“Trust is the foundation of leadership. It is the glue that holds an organization together. Leaders cannot repeatedly break trust with people and continue to influence them. It just doesn’t happen.”

When they take on a new leadership role, all leaders have a certain amount of trust from their followers. Whatever they do either builds it up or depletes it. If a leader keeps making one bad decision after another, they keep losing the trust of their people until their reputation is completely damaged.

In contrast, leaders who keep making good decisions and keep recording wins for their organizations build up trust with their people. And even if they made a huge blunder at some point, they’d still have a lot of credibility left over.

Trust is built by consistently exemplifying competence, connection, and character. People will forgive occasional mistakes based on competence, especially if they can see that you’re still growing as a leader, and they will give you some time to connect. But they won’t trust someone who has slipped in character. In that area, even occasional lapses are lethal.

Increase your trustworthiness as a leader
Team leadership

“The best place for a leader isn’t always the top position. It isn’t the most prominent or powerful place. It’s the place where he or she can serve the best and add the most value to other people.”

The interaction between every leader and follower is a relationship that either adds or subtracts value. Because we’re naturally selfish, adding value requires a leader to get out of their comfort zone every day and become intentional with their actions. When they do so long enough, the value they add begins to multiply throughout the organization.

The attitude of the leader affects the atmosphere of the office. If you desire to add value by serving others, you’ll become a better leader. And your people will achieve more, develop more loyalty, and have a better time getting things done than you ever thought possible.

People Do What People See

“Leadership is more caught than taught.”

Great leaders are both highly visionary and highly practical. Their vision enables them to see beyond the immediate, but they’re also practical enough to know that vision without action achieves nothing.

It’s easier to teach what’s right than to model it. But followers are always watching and would do exactly what they see their leaders do, no matter what they’ve been told. Effective leaders work on changing themselves before trying to improve others. They realize that the most valuable gift they can give their followers is to set a good example themselves.

Only Secure Leaders Empower Others

“Enlarging others makes you larger.”

To lead others well, we must help them reach their potential. That means being on their side, encouraging them, giving them power, and helping them succeed.

When leaders fail to empower others, they create barriers within their organizations that followers can’t overcome. If the barriers remain for too long, the people either give up and stop trying or move to other organizations where they can maximize their potential.

The main ingredient for empowering others is a high level of belief in people. Great leaders look beyond themselves and their insecurities and invest in the progress of those around them. They give others credit even when it’s unarguably theirs to take. They know that great things happen when they don’t care who gets the credit, and the greatest things happen only when they give the credit to others.

Leadership Legacy is Measured by Succession

“A legacy is created only when a person puts his organization into the position to do great things without him.”

A legacy lives on in people, not things. Too often, leaders put their energy into organizations, buildings, systems, or other lifeless objects. But only people live on after we’re gone. Everything else is temporary.

To create a legacy as a leader, you need to live it first. You must become what you desire to see in others. Just about anybody can make an organization look good for a moment—by launching a flashy new program or product, drawing crowds to a big event, or slashing the budget to boost the bottom line. But leaders who leave a legacy take a different approach. They take a long view.

Such leaders typically move from achieving big things by themselves to empowering others to achieve great things, too. They don’t stop there, though. Their ultimate goal is to turn those who follow them into leaders who can do great things on their own. And that’s a true legacy!

Leave a lasting legacy as a leader
Team leadership