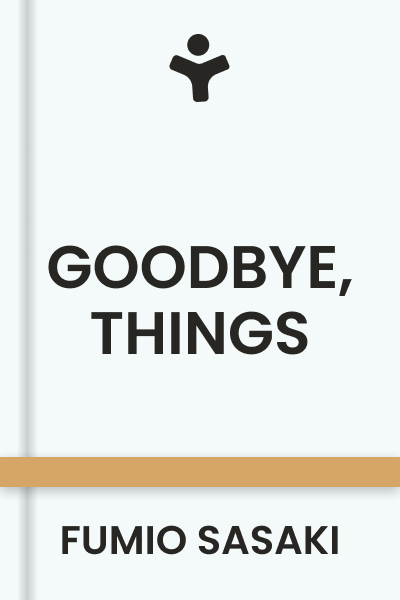 In Goodbye, Things, Fumio Sasaki recounts his own minimalist life-changing experience, offering specific advice on the discarding process and demonstrating how the new minimalist movement may enhance our environment and enrich our lives. A simple lifestyle may benefit anybody, and Sasaki's humble vision of real happiness will open your eyes to the potential of minimalism and simplicity.

Notice the benefits of minimalism

“There’s happiness in having less. That’s why it’s time to say goodbye to all our extra things.”

We've convinced ourselves that happiness can be purchased and that its level increases as we accumulate more possessions. However, time, energy, and freedom are all sucked away by the unnecessary material items in our lives. Our worth should not be determined by our possessions. We think other people value us by the things we own. Minimalism will give us better value measurements - to value ourselves according to our personal characteristics.

Our need to accumulate things originates from our ancestors, but they had a meaningful purpose for it: functionality and survival. We still use that mechanism now even though we don't need it, and we collect items that aren't necessary to sustain life. The core concept of minimalism is to only own objects that serve a specific purpose.

A minimalist understands what is vital for them and lowers their staff to focus on the truly important things. There are many reasons someone may turn towards minimalism. Some people's lives spin out of control due to the consequences of their material possessions. Others' perspectives have shifted as a result of a catastrophic natural disaster. We should find our own definition of minimalism and our own reason to change our lifestyle. It’s not so hard when we notice all the benefits minimalism brings.

Possessions might make us satisfied for a short time, but true happiness is in having less and not being dependent on material things. We can instead live lives filled with simplicity, happiness, freedom, and true values.

Begin your journey towards minimalism
Self-awareness

“We think we can’t become a minimalist until our lives have settled down. But it’s actually the other way around; we won’t be able to settle down until we’re living a minimalist life.”

To start living as a minimalist, we should think like one. First, we should change the mindset that we cannot get rid of our things or that is too hard. Truly, the hardest things to let go of are sentimental items from our past that once defined us. However, if you want to change and grow, you must let go of the items from the past and focus on the present moment - who you are today without those possessions.

Change the mindset of “things define who I was/who I am”.

"Learned helplessness" is a psychological concept that describes why it is so hard for us to discard things. We just haven't developed the practice of discarding our belongings. We might feel guilty, insecure, or sad because something has sentimental value - but if we stick to our memories, we cannot change and grow. In other words, we feel negative emotions because we think we are about to lose something, but we forget how many positive emotions we will feel once we become a minimalist.

It often feels impossible to live without many things. According to philosopher Baruch de Spinoza, when people consider something impossible, they've already decided they don't want to accomplish it. Though we may have a true desire to eliminate all of our unnecessary possessions, our sense of security in possessing them may be stronger.

We can live with just a few, necessary things and we are not losing anything by it - we are actually getting a whole new life full of freedom and happiness.

“Differentiate between things you want and things you need. Here’s an exaggerated example. You’re climbing a mountain but you aren’t well equipped. You’re wearing thin clothing, you don’t know anything about the environment, and you get lost. The temperature drops, it starts pouring rain, and you’re trembling from the cold. Desperate, you finally find a small lodge where you step inside and warm your freezing body with a blanket. That blanket is an item that you truly need.”

We accumulate things because we buy what we want rather than what we truly need. For example, we purchase something based on its design, color, or texture rather than functionality. Several pieces of the same object in various colors are an example of this mindset that leads to clutter. To avoid this mistake, we should ask ourselves a simple question: “Do I really need this?”

We also tend to fall into the trap of “out of sight, out of mind”. We move, organize, and store our thing when we should be throwing them away instead.

Become a Minimalist Stage I

“Tatsuya Nakazaki said, “Even if we were to throw away photos and records that are filled with memorable moments, the past continues to exist in our memories. I don’t think it’s such a big deal to throw away objects; it isn’t as if we’re throwing away our past. ”

Discarding is a skill that needs to be practiced. What is required is only a strong decision and a clear vision of how far we want to go with a minimalist. If we decide to keep just a few necessary things, we will not waste our time questioning whether we are going to keep something or not.

One of Japan's and America's top baseball players, Ichiro Suzuki, believes that accumulating small accomplishments is the only way to attain greatness. The same is true when it comes to discarding items. Gradually, we build on our achievements until we reach a larger goal - to live as a minimalist. We should adopt discarding as a daily habit.

Sentimentality is what stops us on the path to minimalism. The solution to that is our camera on the phone - we can take pictures of everything that is difficult for us to separate from. We should know that throwing things away is not the same as throwing away memories. Marie Kondo's approach of touching objects and keeping only those that bring us joy and happiness may be beneficial. There is also one good technique: collecting things we doubt about in a box or bag, putting them away, and saying "See you later," thus giving us time to see do we really need them - we usually realize we can live without them.

A minimalist only possesses the absolutely necessary objects and utilizes them for their usefulness rather than their aesthetic worth. We must cultivate the habit of discarding things and practice this skill daily. Minimalism is a way of living that provides us a feeling of freedom, relaxation, and tranquility.

“The American poet Allen Ginsberg once observed that if you pay twice as much attention to your rug, it’ll mean the same thing as owning two rugs. The number of possessions you have has no relevance to the level of satisfaction that you’ll get from them.”

Over time, we can progress in minimalism, become more accustomed to owning just a few things, and skip some pre-minimalist techniques such as putting things away in some places instead of throwing them right away and wearing just a few pieces of clothes. Wearing similar clothes on all occasions is a hallmark of minimalism. It's a time and money-saving method of dressing. Many successful people like Steve Jobs, Mark Zuckerberg, and Einstein wore the same type of outfit each day.

When we start getting rid of our belongings, it may be stimulating. The benefits of gaining the courage to let go are instantly apparent. Both decluttering and gaining provide excitement, so we shouldn't be dependent on one or the other. We should find our own minimalism level.

Experienced minimalists think multi-functionally; they use one thing for several purposes. We need to figure out how many ways we can use one thing. One plate can be used for all kinds of meals, and one mattress can be a bed, an armchair, a sun lounger, etc.

Living a minimalistic life means applying simplicity in thinking and behaving and turning to true non-material life values; that is what ultimately leads us to true happiness.

Level up your minimalism practice
Self-compassion