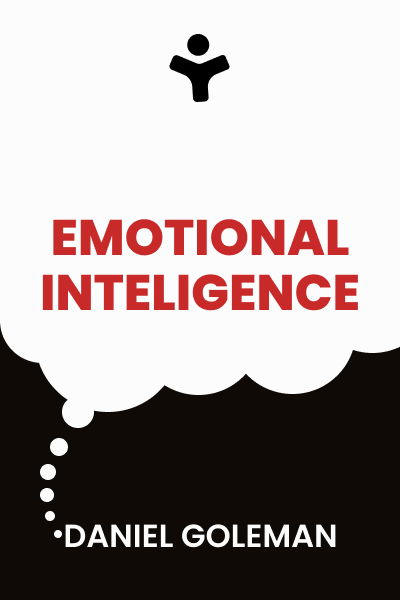 Emotional Intelligence: Why It Can Matter More Than IQ

Everyone knows that high IQ is no guarantee of success, happiness, or virtue, but until Emotional Intelligence, we could only guess why. Daniel Goleman's brilliant report from the frontiers of psychology and neuroscience offers startling new insight into our "two minds"—the rational and the emotional—and how they together shape our destiny.

The good news is that "emotional literacy" is not fixed early in life. Every parent, every teacher, every business leader, and everyone interested in more civil society has a stake in this compelling vision of human possibility.

What are emotions for?

“It is with the heart that one sees rightly; what is essential is invisible to the eye.” - Antoine de Saint-Exupéry

All emotions are, in essence, impulses to act, the instant plans for handling life that evolution has instilled in us. Emotions leading to actions are most obvious in watching animals or children; it is only in “civilized” adults we so often find the great anomaly in the animal kingdom, emotions—root impulses to act—divorced from the obvious reaction.

Fear puts the body on general alert, making it edgy and ready for action, and attention fixates on the threat at hand, the better to evaluate what response to make.

Happiness offers the body a general rest, as well as readiness and enthusiasm for whatever task is at hand and for striving toward a great variety of goals.

Surprise offers more information about the unexpected event, making it easier to figure out exactly what is going on and concoct the best plan for action.

The main function of sadness is to help adjust to a significant loss, such as the death of someone close or a major disappointment.

In the first few milliseconds of our perceiving something we not only unconsciously comprehend what it is, but decide whether we like it or not; the “cognitive unconscious” presents our awareness with not just the identity of what we see, but an opinion about it. Our emotions have a mind of their own, one which can hold views quite independently of our rational mind.

When an emotion triggers, within moments the prefrontal lobes perform what amounts to a risk/benefit ratio of various possible reactions, and bet that one of them is best. For animals, when to attack, when to run. And for we humans … when to attack, when to run—and also, when to calm, persuade, seek sympathy, stonewall, provoke guilt, complain, put on a facade of bravado, be contemptuous—and so on, through the whole repertoire of emotional wiles.

At these moments the rational mind is swamped by the emotional.

“You don’t need to know exactly what something is to know that it may be dangerous.”

People with well-developed emotional skills are more likely to be content and effective in their lives, mastering the habits of mind that foster their own productivity; people who cannot marshal some control over their emotional life fight inner battles that sabotage their ability for focused work and clear thought.

Self-awareness—recognizing a feeling as it happens—is the keystone of emotional intelligence. The ability to monitor feelings from moment to moment is crucial to psychological insight and self-understanding. An inability to notice our true feelings leaves us at their mercy. People with greater certainty about their feelings are better pilots of their lives, having a surer sense of how they really feel about personal decisions from whom to marry to what job to take.

Self-awareness has a more powerful effect on strong, aversive feelings: the realization “This is anger I’m feeling” offers a greater degree of freedom—not just the option not to act on it, but the added option to try to let go of it.

Identify your feelings when they arise and find balance
Mindfulness

“We very often have little or no control over when we are swept by emotion, nor over what emotion it will be. But we can have some say in how long an emotion will last.”

Handling feelings so they are appropriate is an ability that builds on self-awareness. It refers to the capacity to soothe oneself, to shake off rampant anxiety, gloom, or irritability—and at the consequences of failure at this basic emotional skill. People who are poor in this ability are constantly battling feelings of distress, while those who excel in it can bounce back far more quickly from life’s setbacks and upsets.

Managing our emotions is something of a full-time job: much of what we do—especially in our free time—is an attempt to manage mood. Everything from reading a novel or watching television to the activities and companions we choose can be a way to make ourselves feel better.

Cure your anger with empathy and self-awareness
Self-control

Get out of worrying, melancholy, or depression with effective distractions
Mindfulness

Marshaling emotions in the service of a goal is essential for paying attention, for self-motivation and mastery, and for creativity. Emotional self-control—delaying gratification and stifling impulsiveness—underlies accomplishment of every sort. Being able to get into the “flow” state enables outstanding performance of all kinds. People who have this skill tend to be more highly productive and effective in whatever they undertake.

Emotions get in the way of or enhance our ability to think and plan, to pursue training for a distant goal, to solve problems and the like, they define the limits of our capacity to use our innate mental abilities, and so determine how we do in life. We are motivated by feelings of enthusiasm and pleasure in what we do—or even by an optimal degree of anxiety— they propel us to accomplishment. It is in this sense that emotional intelligence is a master aptitude, a capacity that profoundly affects all other abilities, either facilitating or interfering with them.

“Being able to manage emotions in someone else is the core of the art of handling relationships.”

The art of relationships is, in large part, skill in managing emotions in others. It’s about social competence and incompetence. These are the abilities that undergird popularity, leadership, and interpersonal effectiveness. People who excel in these skills do well at anything that relies on interacting smoothly with others; they are social stars.

Handling emotions in someone else requires the ripeness of two other emotional skills: self-management and empathy. With this base, the “people skills” ripen. These are the social competencies that make for effectiveness in dealings with others; deficits here lead to ineptness in the social world or repeated interpersonal disasters. Indeed, it is precisely the lack of these skills that can cause even the intellectually brightest to founder in their relationships, coming off as arrogant, obnoxious, or insensitive. These social abilities allow one to shape an encounter, mobilize and inspire others, thrive in intimate relationships, persuade and influence, to put others at ease.

Be more social by being self-expressing and empathic
Empathy

“This mapping of the fault lines that may lead a couple to divorce makes a convincing case for the crucial role of emotional intelligence in the survival of a marriage.”

Men and women, in general, need different emotional fine-tuning. For men, the advice is not to sidestep conflict, but to realize that when their wife brings up some grievance or disagreement, she may be doing it as an act of love, trying to keep the relationship healthy and on course (although there may well be other motives for a wife’s hostility).

When grievances simmer, they build and build in intensity until there’s an explosion; when they are aired and worked out, it takes the pressure off. But husbands need to realize that anger or discontent is not synonymous with the personal attack—their wives’ emotions are often simply underliners, emphasizing the strength of her feelings about the matter.

Imagine the benefits for work of being skilled in the basic emotional competencies—being attuned to the feelings of those we deal with, being able to handle disagreements so they do not escalate, having the ability to get into flow states while doing our work. Leadership is not domination, but the art of persuading people to work toward a common goal. And, in terms of managing our own career, there may be nothing more essential than recognizing our deepest feelings about what we do—and what changes might make us more truly satisfied with our work.

Some of the less obvious reasons emotional aptitudes are moving to the forefront of business skills reflect sweeping changes in the workplace. We should aim for these three applications of emotional intelligence: being able to air grievances as helpful critiques, creating an atmosphere in which diversity is valued rather than a source of friction, and networking effectively.

“The ways a couple handles the feelings between them—in addition to their direct dealings with a child—impart powerful lessons to their children, who are astute learners, attuned to the subtlest emotional exchanges in the family.”

Family life is our first school for emotional learning. In this intimate cauldron, we learn how to feel about ourselves and how others will react to our feelings, how to think about these feelings, what choices we have in reacting, and how to read and express hopes and fears. This emotional schooling operates not just through the things that parents say and do directly to children, but also in the models they offer for handling their own feelings and those that pass between husband and wife. Some parents are gifted emotional teachers, others inhuman.

Become a better parent by listening to your child
Raising children