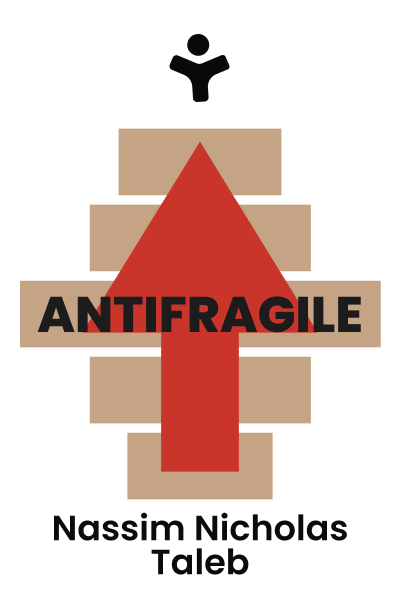 Antifragile: Things That Gain from Disorder

The book Antifragile: Things that gain from disorder, written by Nassim Nicholas Taleb, debates the concept of antifragility and how specific systems thrive precisely because of the shocks and insecurities they go through.

Mobilizing examples from finance, politics, ecology, medicine, architecture, and education, Taleb takes a tour of all areas of human life and beyond to identify and analyze the components that strengthen systems, making them antifragile. Unlike strength and robustness, the antifragile not only resists stress but learns from it and improves from it.

The Antifragile: An Introduction

“Intellectuals tend to focus on negative responses from randomness (fragility) rather than the positive ones (antifragility).”

An antifragile system thrives on randomness, uncertainty, stressors, errors, and time. The antifragile person advances confidently amid difficulties. He is not afraid of uncertainty because he has already learned from adversity and knows how to flourish amid chaos. He knows how to handle stress and see opportunities where others only see problems.

Chaos, uncertainty, instability, unforeseen events, loneliness, anxiety... Our society could be defined by these and many other adjectives that have taken center stage in times of crisis. Amid this, there is a survival strategy: you can learn to be antifragile.

You can learn to survive and flourish in challenging circumstances and take advantage of turbulent times. Only when we learn from adversity, we heal and become stronger, faster, wiser; we become our best selves.

Modernity And The Denial of Antifragility

“We made the wrong mistake.”

One must understand that randomness and life stressors are good for us in most cases. What's more, the lack of randomness causes fragility.

To better understand the importance of life stressors, let's compare two workers: a qualified bank clerk and a taxi driver. The first is fragile; he can be fired due to an economic crisis and if he is over a certain age, he is let go from his job. The taxi driver is antifragile, he will have worse and better months, but they are minor crises from which he learns and moves on.

What’s more, information overload (the norm today) often leads to unnecessary interventions in today’s society. The excess of information makes us see problems where there are none and we tend to act when we should not, especially in politics and economics.

Expose yourself to risks, get out of your comfort zone, and from there, you will be able to evolve and learn to act more naturally in stressful situations. Befriend “uncertainty” and embrace what comes at you, both positive and negative.

Manage risks so you can benefit from unpredictable events
Life philosophy

Ration the amount of information you receive daily
Digital minimalism

A Nonpredictive View of The World

“Success brings an asymmetry: you now have a lot more to lose than to gain. You are hence fragile.”

Predictions often have bad results for those who make them and for those who believe them. Someone who does not believe in predictions and bets against them usually does well.

Take the example of Seneca, who was one of the greatest exponents of Stoicism, an ancient philosophical school focused on practical wisdom. Seneca constantly imagined that he lost everything so that he would be prepared for it if it happened. He was the richest man in the Roman Empire and yet, the loss of his wealth would not have affected him.

To protect yourself from negative and unforeseen events and take advantage of positive ones, the best method is to combine both ends, without the middle point.

For example, in finance, it is advised to keep 90-95% of your money invested in assets that protect against inflation with the least possible risk, and the rest in things that are as risky as possible. So, if that small part is lost it is not something very serious, and at the same time, there is the option of having very large benefits.

Find someone to eat lunch with
Socializing

Use your travels to become more antifragile
Life philosophy

“You will never get to know yourself—your real preferences—unless you face options and choices.”

Optionality is an important concept within antifragility. An option is something that has limited detriment and a much higher potential benefit.

The advantage of optionality is that you don't have to be the least bit smart to apply it. Trial and error, with a rationale that leads you to identify successful trials, are more than enough. In fact, it is far superior to intelligence and/or knowledge.

In most areas, this is a practice that brings progress and knowledge and not the other way around. All discoveries and improvements come from practice. From trial and error - from learning from the best people in the field and especially from their mistakes. Not from theory outright.

“If you can say something straightforward in a complicated manner with complex theorems [...] people take the idea very seriously.”

Fragile and antifragile things have non-linear responses to volatility. For example, a porcelain mug is fragile. It is not the same to drop it from 1 cm in height 100 times and from 1 meter once. In the first case, nothing may happen, in the second, it will break.

There are quite a few examples of non-linear antifragile systems. Evolution could be seen as one too. The process works in such a way that you start with organisms that have certain characteristics to survive in the environments that existed until now. But suddenly, there are changes that begin to generate a certain level of stress on these creatures.

This stress makes certain parts, which before were ideal for what they had, become disadvantages, thus fragile. On the other hand, other parts that were not as useful begin to demonstrate their value.

The various parts of the whole are fragile, but the whole itself is not. Antifragility is discarding what you don't need and moving on. This is only possible because we, as humans, are capable of obtaining added capabilities in stressful situations.

Embrace what is inconsistent
Life philosophy

“In life, antifragility is reached by not being a sucker. ”

Time is the highest exponent of volatility. It eliminates the fragile (people, animals) and makes the antifragile (species, information) last. With fragile things (people), a younger item has a longer life expectancy than an old one. What has been around longer is more likely to last longer in the future as well.

Subtraction, or the negative path, is the best tool to improve your health and life expectancy. For example, limiting or eliminating surgical or medical interventions to the most urgent or serious would actually improve the effectiveness and efficacy of health systems and patient survival rates.

The biggest demonstration of a negative path is how one of the best things that has been done for the health and life expectancy of people in the developed world is to encourage them to quit smoking. This has worked much better than all cancer treatments, operations, and other such medical interventions.

Study hard for what you don’t know about
Growth

Learn to visualize your future the antifragile way
Growth

The Ethics of Fragility and Antifragility

“Remember that food would not have a taste if it weren’t for hunger; results are meaningless without effort, joy without sadness, convictions without uncertainty, and an ethical life aren’t so when stripped of personal risks.”

Modern life has brought some agents to have optionality at the expense of the fragility of others. A good example of this is opinions. Journalists and professional opinion-makers can say things that contribute to serious consequences, for example, provoking a war like the one in Iraq, and they will not pay any consequences. What's more, they will benefit from it because they will be able to continue giving their opinion. This is very serious. We should act on our opinions, always.

The right thing to do is to have a profession that is consistent with your ethics and beliefs. That is, let ethics come first, and let your profession depend on it.

There are people who do it the other way around. For example, a president of a tobacco company will justify the consumption of tobacco in any way. The reality is that tobacco causes the premature death of millions of people.

Find out what your values are
Life philosophy