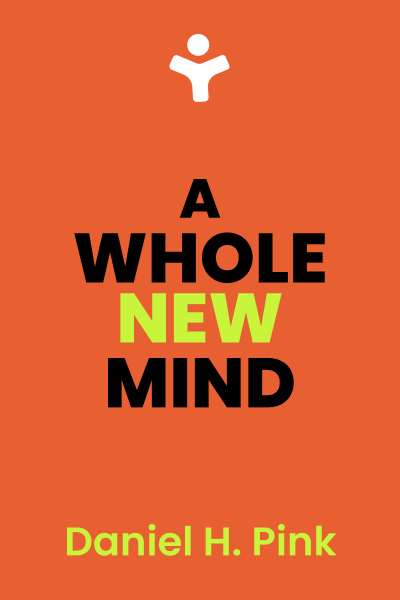 A Whole New Mind: Why Right-Brainers Will Rule the Future

‘A Whole New Mind’ is an encouraging call-to-action guide that draws its readers into exploring and embracing creativity. A New York Times Bestseller, this book is Daniel H Pink’s creation and compilation of ideas, experiences, with takeaways from research from around the world, outlining the emerging demand of a right-brain approach to life.

Professional success and personal satisfaction come together through the implementation of holistic ideas discussed by the author in this book. This useful text full of self-evident ideas will make you realize the importance of developing your right-brain abilities, to prepare you for the future and a more holistic-creative version of yourself.

“Yet for all the brain’s complexity, its broad topography is simple and symmetrical.”

The human brain is by far the most complex thing yet discovered in our universe. Often, the left half of the brain is considered the crucial half, while the right side is subsidiary. However, the truth is, the left hemisphere of the brain is not in any manner inferior to the right. They just perform different functions. The left reasons sequentially while the right reasons holistically.

“They’ve created an SAT-ocracy- a regime in which access to the good life depends on the ability to reason logically, sequentially, and speedily.”

From entrance exams in the United Kingdom to the education system in Asian countries, the approach of assessing and training individuals with an attempt to develop their left brain has been a rousing success. It has opened opportunities for everyone, but it’s no longer enough.The world is now moving towards an idea of success which is right-brain dependent.

Today, the defining feature of social, economic and cultural life in much of the world is abundance. Powered by the knowledge of our left brains, we have created a standard of living that would have otherwise been unfathomable. But the irony of this abundance is that it has lessened its own significance, leading to an increasing demand for right-brained sensibilities such as aesthetics.

Here, high concept refers to the ability to create artistic and emotional beauty, to detect patterns and opportunities, to craft a satisfying narrative, and to combine seemingly unrelated ideas into a novel invention.

High touch refers to the ability to empathize, to understand the subtleties of human interaction, to find joy in one’s self and to elicit it in others, and to stretch beyond the mundane in pursuit of purpose and meaning.

The only means to differentiate and make goods and services more likeable is by offering something physically beautiful and emotionally compelling to customers. The high concept abilities of an artist are now more valuable than the easily replicated ability of a business graduate.

“In a world enriched by abundance but disrupted by the automation and outsourcing of white-collar work, everyone, regardless of profession, must cultivate an artistic ability.”

The wealth of nations and the well-being of individuals is becoming increasingly dependent on the number of artists in the room. Design, or the combination of utility and significance, is becoming more and more important.

Beyond the elementary and secondary level, design education is booming. Even if those who study design do not go into the art industry, the experience of having been in such an environment will help them appreciate the world and understand others better.

For example, a toaster is used by a typical person for about 15 minutes a day - it remains on display for the rest. In other words, 1% of the toaster’s time is about its utility but the rest of it is about its significance. This illustrates just how important design is.

Design is an aptitude that is difficult to outsource or automate, and at the same time, it brings meaning and beauty to our lives.

Observe and identify designs around you.
Creative thinking

“Narrative imagining -story- is the fundamental instrument of thought.”

Stories are easier to remember because stories are how we remember. They are as integral to the human experience as design. All of our brains have an internal ‘story grammar’ that helps us understand the world as a pattern of experiences.

Minimising the importance of stories places you in personal and professional peril. Stories sharpen our understanding of one thing by showing it in the context of something else. This ability to weave events into an emotionally compelling narrative has become an essential attitude in business, medicine, and personal life.

Storytelling does not replace analytical thinking, it supplements it. Like design, stories are a key way for individuals and entrepreneurs to distinguish their goods and services in a crowded marketplace. Stories can provide us with context enriched by emotion and a deeper understanding of how we fit into this world, and why that matters.

“Symphony - it is the capacity to synthesize rather than analyze.”

Symphony is basically the ability to put together the pieces. It is about seeing relationships between seemingly unrelated fields, to detect broad patterns rather than to deliver specific answers and invent new things by combining elements that exist and were not noticed enough by anyone else.

Convention hampers progress. It is important to think unconventionally. Two existing ideas can create a powerful new idea that no one thought about before. What no one else ever thought could unite can be your idea of success.

While metaphors are often considered ornamentation, it is actually central to reason. Cognitive scientists call this whole-minded ability “Imaginative Rationality”. The ability to think metaphorically is uniquely human; we are able to detect relationships that machines cannot.

In today’s world, we come in contact with more people than any individual would do, years ago. Hence metaphorical imagination is important in forging empathic connections and communicating experiences. It is essential for marketers to supplement their quantitative research with qualitative investigations into the metaphorical minds of their customers.

“Empathy is a stunning act of imaginative derring-do, the ultimate virtual reality-climbing into another’s mind to experience the world from that person’s perspective.”

Empathy is the ability to imagine yourself in someone else’s position and to intuit what that person is feeling. It is something that we do spontaneously and not by deliberation. The importance of empathy is that it helps us see the other side of an argument and comfort a person in distress. It is an important step towards self-awareness.

Empathy is an important asset of leadership. While IQ is easily replaceable, empathy is impossible for computers to reproduce.

Empathy is much more than just a vocational skill. It is an ethic for living. Empathy is what makes us human.

“When you are playful, you are activating the right side of your brain. The logical brain is a limited brain. The right side is unlimited, you can be anything you want.”

Laughter clubs are an emerging phenomenon, and they are not just a trend. They exist on the lines of the ideology that play, in itself, is an important part of life. To play is to act out and be wilful, exultant and committed. Manifesting itself in games, humour and joyfulness, play has the power to make us more productive and fulfilled.

While play is often discarded as a non-serious form of brain development, video games are a common tool for learning problem solving. While the last generation explored itself via the presence of television, the current generation channelizes exploration through video games.

Playing video games is not hampering your social progress, rather, they offer a more potential power of learning, than classrooms do. Playing video games actually enhances the right brain ability to solve problems that require pattern recognition. Games these days have moved away from simply being a combination of codes, there is an increased requirement of making it an artistic medium.

Humour is another form of play. It represents one of the highest forms of human intelligence. It serves a wide variety of purposes; it deflects criticism, improves morale, helps communicate messages, reduces hostility, and relieves tension. When used sensibly, humour can positively lighten the workplace environment and establish cordial relationships amongst the workforce.

While happiness is a conditional state, joyfulness is totally unconditional. There is absolutely no harm in raising your hands high in the air and letting out a hearty laugh. Scientific records offer modest but growing support for the analgesic properties of humor and laughter. Laughter also has proven aerobic benefits - it activates cardiovascular activity for example.

Laughter leads to joyfulness, which in turn can lead to more creativity, productivity and collaboration.

“Our fundamental drive, the motivational engine that powers human existence is the pursuit of meaning.”

We are shifting from prioritizing materialist values such as economic and physical security towards postmaterialist priorities instead. Now, self expression and quality of life are becoming increasingly important.

There are two ways that lead to the discovery of ‘meaning’ - spirituality and happiness. Across many different realms, there is a growing recognition that spirituality is a fundamental part of the human condition.

We are social creatures who crave a sense of coherence and purpose. Nowadays, consumer desire for these qualities is on the rise, owing to a meaning-seeking population. Green products and sustainable clothing are examples of this.

As rising prosperity and abundance allow more people to engage in this pursuit, and as more of us summon the will to do so, “Meaning” will move to the center of our lives.