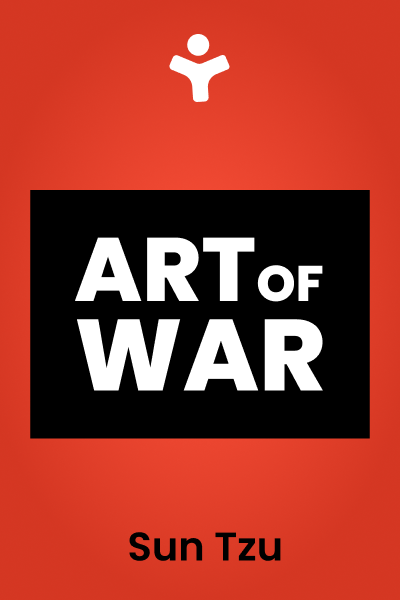 The Art of War

Sun Tzu’s approach to warfare draws inspiration from Taoism’s belief in the possibility of achieving perfection in and harmony with all aspects of life, as well as its distaste for unnecessary violence. Sun Tzu also claims morality and ethics, as well as process and persistence, as the key to the success of any leader. He portrays the best strategy as psychologically influencing the opponent before the actual conflict occurs and conquering them with peace and no violence.

The title, “The Art of War”, emphasizes the creative abilities of a leader in practical strategy, organization, preparation, and conduct of the operation. This creativity is what empowers any individual to cultivate their resources while laying their plans well ahead, and respond immediately to adversities as they arise.

Moral of “The Art of War”

So, you must calculate every step, predict the unpredictable, and devise layers of strategies on how to deal with the known and the unknown most effectively.

In order to master the art of deception, you must understand and study yourself and your opponent, you must enforce discipline, unity, and effective communication within your team, and you must gather as much information as possible. You must make sure this information is accurate as it will guide how you utilize your limited resources.

Humans are unavoidably limited by negative and positive emotions, limitations, and fear, causing dysfunction and stress. You must account for your human limitations as well as the limitations of those you lead, but also those of your opponent. These can be and should be manipulated in your favor.

War must be thoroughly studied and every aspect of it must be calculated methodically because the fate of an entire country depends on both its course and outcome. There are five pillars that form the framework for calculation and consideration in war: moral influence, weather, terrain, command, and doctrine. These pillars as a whole serve to sustain conflict strategies,  including internal conflict as well as battles.

Human behavior is the most difficult thing to calculate. When strategizing against an opponent, you must learn as much as you can about them. This will help you deceive them and appear weak where your strength lies. They will target what they assume to be your weakness when strategizing.

Confuse and irritate your opponent to throw them off your scent. For example, appear to be unorganized.

“In war, then, let your great object be victory, not lengthy campaigns.”

To win a war, you must avoid acting on impulse emotions. Logically study yourself, your opponent and master the relevant principles and techniques. Once you understand your and your opponents’ capabilities and limitations, the strategy will flow naturally.

Strategy is the outcome of self-study, self-mastery, observation of your opponent, and technical proficiency. The best strategy is one that wins the conflict without fighting.

Approach conflict with a logical and calculated strategy
Team leadership

“A victorious wins its victories before seeking battle; a human power destined to defeat fights in the hope of winning.”

A conflict general can control himself and his troops but cannot do the same for their opponent. The art of conflict revolves around meticulous strategizing, and these strategies fall into two mother categories: defense and offense.

To be able to counter uncontrollable factors, a general must devise strategies to manage both defense and offense.

“The clever combatant looks to the effect of combined energy, and does not require too much from individuals. Hence his ability to pick out the right men and to utilize combined energy.”

The energy and power of human power come from its momentum. Surging water can carry massive stones because of the force of the united movement of particles. A diving falcon breaks its prey’s back because of its pinpoint timing.

Similarly, when the skilled general forges his troops into well-organized units that can act as a single, irresistible force, his momentum is destructive and his timing perfect.

“Therefore the clever combatant imposes his will on the enemy, but does not allow the enemy’s will to be imposed on him.”

With every strength comes a weakness. Opportunities come from openings in the environment caused by the relative weakness of the enemy. Success in conflict depends on your ability to create a situation in which the opponent is forced to engage in a way that you would want them to: by exposing their weak points and targeting your strong points.

“Ponder and deliberate before you make a move.”

To win a war, a general must create opportunity out of any situation; no matter the nature of the situation. In order to do so, you must understand natural laws and use them as guidance on how to use your force. In order to maneuver efficiently, your human power must have iron discipline and be trained to respond to signals immediately and obey complex and changing commands under stress.

“The general who does not understand variation in tactics will not be able to turn his knowledge to practical account, he will fail to make the best use of his men.”

Different circumstances call for different tactics and different choices. This choice must be made with lightning speed and iron certainty. To facilitate such an approach, all aspects of any possible circumstance must be pre-studied, understood, and planned for. Emotional cues must be ignored, and strategies followed strictly.

The Army on the March

“If a general shows confidence in his men but always insists on his orders being obeyed, the gain will be mutual.”

A general is on a journey alongside those leads.  His soldiers must be treated first with humanity but kept under control by means of iron discipline. The general is responsible for the ability and behavior of their men. A general must be able to analyze the changes in behavior or routine to identify the enemy’s weaknesses.

“In war, then, let your great object be victory, not lengthy campaigns.”

In war, a general will face a variety of naturally occurring situations and paths they must walk on. These will be challenging and test attitudes, resilience, and discipline of both the general and those they lead.

For every path or situation, there can be a strategy designed to turn disadvantages to advantages. Make the most out of these advantages. Failure only has roots in the general’s approach.

“Concentrate your energy and hoard your strength.”

The principle on which to manage human power and potential is to set up one standard of courage that all must reach. The different measures suited to the varieties of predicaments that may arise, the expediency of aggressive or defensive tactics, and the fundamental laws of human nature must be studied.

Keep your focus on creating victory, don’t be discouraged
Self-management

The Attack by Fire

“If it is to your advantage, make a forward move; if not, stay where you are.”

Using natural forces or resources can be a powerful tactic. If done properly, direct conflict, which drains resources and has great potential for harm, can be avoided.

However, there's a right time and place for using any specific natural force, such as leveraging cultural trends or tendencies to accomplish something.  Know if the times are primed for other forces outside your control to come to your assistance and strategize to channel them appropriately.

The Use of Spies

“Hence it is only the enlightened ruler and the wise general who will use the highest intelligence of the army for purposes of spying, and thereby achieve great results.”

War can be won with information. This puts you in a position where you’re able to . Your resources will always be limited and humans have imperfect nature.

This means that you must gather as much information as possible in order to use your resources most effectively. Condition yourself and those you lead in a way that leads to the least costly, most speedy and least damaging way.