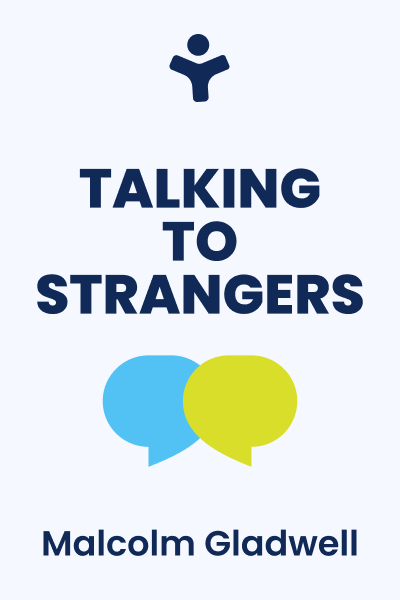 Talking to Strangers: What We Should Know About the People We Don’t Know

In July 2015, a policeman stopped Sandra Bland. She was arrested, and three days later, she committed suicide. As the video of her arrest became public, many protests erupted. The video showed a white policeman arresting a black woman without a clear reason.

But this arrest was not racial; it was much deeper and more complicated. This book describes the mechanism that led to this situation and what happened next.

“If I can convince you of one thing in this book, let it be this: Strangers are not easy.”

In the ’80s, the CIA had a lot of agents working to spy on Cuba and the Soviet Union. However, as they later found out, most of these agents were double agents. They were delivering the CIA carefully drafted information created by the countries they were supposed to be spying on. The CIA had resources to complete background checks on all of the agents. And they had the best people in the world to verify these agents’ authenticity. Yet, they were fooled on both fronts.

Puzzle #1: Why can’t we tell when the stranger in front of us is lying?

Before World War II, a few people met with Hitler trying to assess his intention. They were trying to find out whether he was preparing for war. Pretty much everyone that spent a significant amount of time with him was convinced that he did not have bad intentions. They thought he was a reasonable man and that he was not going to attack anyone.

However, people that didn’t spend a significant amount of time with him were convinced that he was preparing for a world war. And they believed he was going to attack very soon.

Puzzle #2: How is it that meeting a stranger can sometimes make us worse at understanding that person than not meeting them at all?

Some people among us may have a second, hidden nature. We know them as good people. They are respected, and they are nice to everyone. We would never think of them as pedophiles or even worse. It’s our nature to judge people on what we see and the information we have. In general, we don’t suspect others of doing something wrong unless we have evidence.

In general, humans are good at determining the intentions of people they know, but not everyone. There are people among us, who, on the surface, are well respected and good; however, in reality, they are criminals.

There is not much we can do about that. We cannot function properly in society without defaulting to the truth, even though this mechanism sometimes leads to huge problems.

When you watch a TV sitcom like Friends, you can understand the situation simply by watching the actors’ facial expressions. Without a sound, you know who is surprised, who is sad, and who is angry. You would think that facial expressions are a universal language; that everyone has the same or similar reactions when they express their emotions. But this is not the case.

Even judges have been known to give the wrong verdict based on the body expression of the suspect.

A blood alcohol level above 0.15 is typically associated with blackouts. People rarely remember what happens after they drink this much. They also transform into a person who makes sense of the world around them very differently than they would if sober.

When a terrorist or any person who might have important information about the enemy is caught, the most common thing to do is to put them in a high-stress situation to get them talking. Sometimes this high-stress situation involves torture and sometimes it involves other techniques. The general idea is to force this person to provide information that might help to catch other terrorists or prevent future crimes.

What studies show, however, is very disturbing. People that are put under high stress lose their memory. They simply forget things. Sometimes, they even revise information and say things they want to be the truth rather than telling the real truth.

Therefore, to obtain accurate information, we shouldn’t put people in these high-stress situations. The more we choose to torture people, the more incorrect information we will collect. This is not because they want to confuse us. Instead, it is simply because they don’t know what is true and what is not.

In the 20th century, many cities were using town gas. Town gas, also known as coal gas, is a gas made from carbon, hydrogen, methane, nitrogen, carbon dioxide, and most dangerous, carbon monoxide. It has enough carbon monoxide to kill humans if they breathe it.

The result of this was that people associated town gas with committing suicide. This means that many people who wanted to commit suicide were successful only because of the presence of town gas. The best proof of this is that when cities converted from town gas to natural gas, the number of suicides dropped. In other words, when people lost this simple way of committing suicide, they decided not to commit suicide at all.

From this, we can conclude that when people decide to do something they normally would not do, it is more likely to be successful only if they are in a particular emotional state and the method is simple and at hand.

In the early 1990s, there was a series of experiments done in Kansas City to try to lower the city’s crime rate. They tried a variety of methods and finally found something that worked. In the most dangerous district of the city, in the evening and nighttime hours, they looked for suspicious drivers. It is not easy for police to search a person walking down the street or inside a house without a good reason to do so. However, it’s much easier to search someone in a car. There are thousands of reasons police can stop a motorist.

When they found a suspicious motorist, they pulled them over and searched the car for guns and drugs. Using this method, they were able to cut the crime rate in half. It was such a big success that many police departments around the world decided to implement this technique.

The problem is that this method was not only implemented in high-crime districts. Instead, it was implemented everywhere.

In Texas, a policeman stopped a suspicious black woman for not signaling to change lanes. The reason to stop her was trivial. Essentially, the policeman simply wanted a reason to stop her as he thought her car looked suspicious. The motorist became aggressive, and this caused her to be arrested. Three days later she committed suicide.

This motorist was Sandra Bland, and her case went viral in the U.S. As the video of her arrest became public, it led to many protests. This was because it showed a white policeman stopping and arresting a black woman without a clear reason.

The court ruled that the policeman made a mistake. However, this case is much deeper and more complicated than that. The policeman did everything he was trained to do. He was taught to stop people that appear aggressive or suspicious.

When you connect all the pieces of the puzzle that have been described, you will understand that what happened is the result of defaulting to truth, lack of transparency, coupling, and very aggressive policing.

“Because we do not know how to talk to strangers, what do we do when things go awry with strangers? We blame the stranger.”

Be careful when you meet strangers, as you don’t know who they really are.
Communication   226