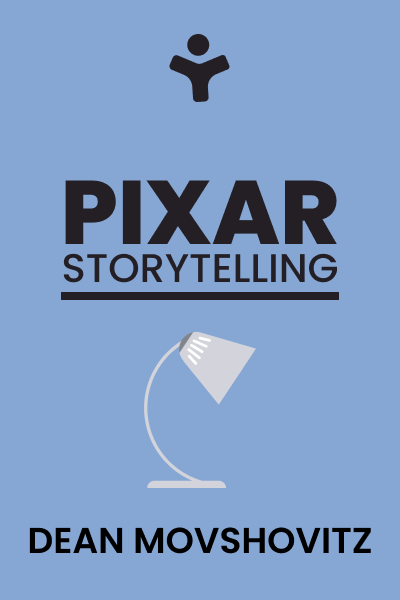 This book explains how Pixar creates unique, interesting, compelling characters and films. It explores Pixar's process of creating a story idea, developing memorable characters with whom the audience can easily connect, and the structure of writing a good story that holds the audience's attention until the very end, making the story spectacular and remarkable.

Pixar's stories have two key characteristics: the emotional stakes are high and the protagonist steps out of his comfort zone to overcome numerous challenges.

The best way we can do this is to ask ourselves what the protagonist wants. Then, put him in the an emotionally challenging situation that’s the complete opposite of their ideal situation. Pixar puts its characters in the most challnging, almost impossible conditions, making them fight for what they have lost.

For example, in the cartoon Toy Story, the emotional stake is that a new toy has replaced an old favorite one. For Wall-E, he had to find strategies to win Eve's heart, or he would lose out on her.

In the cartoon Up, devastated Carl is about to lose his final link to his life with Ellie—the house. In the cartoon Inside Out, Riley's world falls apart, and Joy, responsible for Riley's happiness, has to find a way to get everything back, while Sadness makes things difficult for her.

What makes it even more realistic are the character flaws. For example, inFinding Nemo, Marlin suffocates his kid and denies him any sense of independence. Marlin, the overprotective father, loses his son.

People find it interesting to watch how characters face obstacles, how they struggle, how they overcome them, and how they change - so this is how our story idea should be shaped. It's also essential to set a theme for the story and connect all scenes to this theme.

Create a catching idea and theme for your story
Writing

"Pixar has created many unforgettable characters: The optimistic, amnesiac Dory; the mute, romantic Wall-E; snobbish critic Anton Ego; and, of course, deeply loyal toy cowboy Woody. Why do these characters resonate so strongly? Well, they are all one of a kind."

A prerequisite for a good film and story is for the audience to love the characters, to identify and sympathize with them.

These characters are engaging and unique with specific traits of their own. They have distinct attitudes and desires and a motive to fight for what they want to achieve. They each have something they care deeply about, often due to a past event that hurt them.

For instance, in Toy Story, Woody has a strong, almost obsessive bond with Andy. In the movie Brave, Merida's mother, Elinor, genuinely cares about every aspect of her daughter. Elinor's nitpicky, obnoxious behavior is motivated by serious factors. She thinks that Merida's fortitude as a princess is the secret to preserving the kingdom's unity and preventing another conflict like the one they previously experienced.

In the first scene of the movie Inside Out, Riley is shown being made happy for the first time by Joy. After that, Sadness appears, causing Riley to start sobbing. Joy, therefore, passionately believes Riley should always be happy and works toward that.

People like to watch characters who go through various obstacles to achieve their desires and goals, who come to almost hopeless situations, but who are brave, consistent, and overcome all difficulties. People empathize with such characters, and empathy is the key to a successful story; that's why we need to give our characters all of that.

"The quality of the conflict in your script is measured by the believable change it propels in your characters. Change is the measuring unit of conflict."

Conflicts are the barriers your protagonist must overcome to achieve their goals, and it’s what keeps your story interesting! The more original your conflicts are, the more enjoyable your story will be.

Every Pixar film contains a dilemma that feels like life or death at some point. So the first way to create a good conflict in the story is to put the protagonist in some serious, even life-threatening situation.

The greater the risk, the more compelling the conflict. Your characters need a cause to care about something. Conflict arises when characters face losing something.

One good example is Woody's predicament in Toy Story 2. Woody will spend the rest of his life in a museum after learning that he is a collector's item. This initially seems awful, but as he gets to know his new friends and muses over an eternity of being observed and admired, he starts to think about it. Andy is unsure what to do when Buzz and his friends arrive to bring Woody back to his house.

The best conflicts give the possibility of construction and destruction. The change leads to growth, and that's what people always like to see - a life transformation caused by your characters' conflicts.

"A structure's goal is to serve as a road map for your writing, creating a series of suggested goalposts to help you both construct and analyze your story."

A good story usually has three to five major events. These events function to trigger a change in intention, perception, or tactic. A good story structure includes:

Pixar often creates a multi-layered structure, with lots of twists, actions, and obstacles, and ends the films with a double climax. In addition, Pixar stories always describe a complex bonding process between two opposite characters who do not like each other.

For example, a fish with memory loss and a frazzled parent form a bond. A monster forms a bond with a kid who is afraid of him and thinks he can kill him.

Use your story’s structure to your advantage
Writing