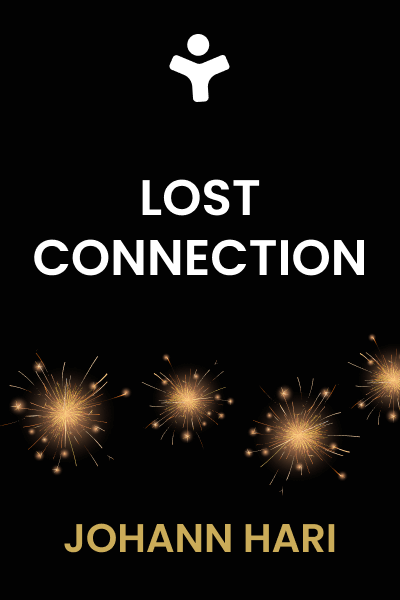 Lost Connections: Uncovering the Real Causes of Depression - and the Unexpected Solutions

Johann Hari came across social scientists worldwide who were figuring out the real causes of depression. It turned out that a malfunction in our brains does not typically cause it, but rather by the way we live now.

During Hari's travels, the people who lived in the Las Vegas tunnels, an Amish settlement in Indiana, and an uprising in Berlin were all depicted in vivid and dramatic detail. They result in answers vastly different from those we have previously received about depression and anxiety.

“We have been systematically misinformed about what depression and anxiety are.”

We tend to view depression as a result of a chemical imbalance, a malfunction in our brains caused by a lack of serotonin, or some other glitch in our mental hardware. We thought that the only solution was to take drugs, which would restore the chemical imbalance.

But why do so many people remain depressed and anxious despite taking antidepressants? This leaves us with the question: Could something besides chemical imbalance cause depression and anxiety?

More people are becoming unhappy due to the same forces that make some of us depressed and extremely anxious. It appears that the spectrum between unhappiness and depression exists.

“[...] if you offer the patient nothing but a story—like, say, by telling them this old bone wrapped in metal will cure your pain—it works an extraordinary amount of the time.”

When a patient receives medical treatment, they get two things: a drug, which will usually have a chemical effect on their body in some way, and a story about how the treatment will affect them.

Sometimes the drug can be just as important as the story you tell. This is known as the placebo effect. It has the power to alter our bodies' physiological processes as well as how we feel. An inflamed jaw and a stomach ulcer, for example, can be cured by a placebo. Most medical issues can be somewhat alleviated by a placebo, at least to some extent.

Antidepressants, according to studies, simply don’t work, except in one case where the impact was minimal. The sad truth is that even drug manufacturers can’t admit it doesn’t work because that would mean they'd make less money. So what do drug users have in common? It is simply the conviction that drugs work.

Depression and anxiety are not something we get suddenly; rather, they are caused by some serious events in our lives. People become depressed as a response to their circumstances. Thus, we should always consider the context.

Depression is brought on by long-term stressors as well as negative life events. If you have some uplifting, stabilizing things going on in your life, you are less likely to become depressed. Similarly, if you have supportive and caring partners and good friends, depression is significantly reduced.

This leads us to the conclusion that depression is largely caused by a problem with your life, not your brain.

Focus on the other person’s story
Communication

The Causes of Depression

Depression may be caused by the following:

Individuals experience the most stress when they do not have a lot of responsibility. It entails putting up with monotonous, boring, and soul-destroying work, where people die a little each day because their work touches no part of them that is them. Disempowerment is at the root of poor mental and emotional health.

Deep loneliness seems to be as stressful as getting punched by a stranger. As much as bees need a hive, humans need tribes. Prolonged loneliness makes you socially withdraw and be wary of any social contact. You become overly cautious, more prone to taking offense unintentionally, and may develop a fear of strangers. You start to feel apprehensive about what you most need.
To end loneliness, you need other people. You need to feel like you are contributing something to the group or the people important to you. You must be on the same team, and "it" can be anything you both deem to be meaningful and valuable. Loneliness isn't the actual absence of other people; rather, it's the feeling that you don't share anything important with anyone else.

The likelihood of people (especially children) experiencing depression and anxiety grows directly proportional to how much they value acquiring things and being seen to have them. There is a higher depression rate among materialistic people or those pursuing extrinsic goals.
If you're one of these people, you may have spent a lot of time and energy pursuing material things. It could be a brand new iPhone, a pricey necklace, a costly vehicle, and so on. However, it is highly unlikely that you will be happier after buying these things.
The opposite happens to people who succeed in achieving their intrinsic goals or those aligned with their values. They feel happier, less anxious, and less depressed. This is because they know they worked towards pursuing something right to do, not because they expect something in return.

Depression is a normal response to abnormal life experiences. It is more likely to result from emotional abuse than any other trauma, including sexual molestation. The primary cause of depression is experiencing cruel parenting.
When a child goes through a particularly traumatic event, it makes them believe it was their fault, resulting in harmful self-criticisms. Understanding how this influences a child’s well-being provides a resolution to an issue that most people fail to recognize.

The only thing worse than having a low status is having one that is unstable. Many of us today suffer from depression and anxiety due to our constant status anxiety.The more unequal our society is, the more we suffer from mental illnesses. When this was broken down to examine depression specifically, it turned out depression increased with inequality.
Large income and status gaps in society give the impression that some people seem supremely important while others have little to no importance at all. The poor are not the only ones who suffer from this. In fact, everyone in a highly unequal society has to consider their status frequently. Am I still standing my ground? Who is trying to harm me? How low can I go? Simply asking ourselves these questions, which is necessary as inequality increases, adds stress to our lives.
This is a typical human reaction to the conditions that each of us faces. But we must remember that the inequality problem is not something we have to overcome on our own; rather, it’s something that we share with others—and attributable to the kind of society we live in.

When we are denied access to the types of landscapes that allowed our evolution, we will likely experience increased depression. Therefore, we must occasionally get away from the jungles of concrete and instead allow ourselves to connect with the Earth. This way, we can come back to life and decrease the probability of feeling depressed.
When we are with nature, we have the impression that our world is enormous and that our problems are small. This impression can help us control our ego.
For millions of years of evolution, nature has been everyone’s home. It is so naive to think we can leave so suddenly without experiencing a loss of connection.

The loss of the future is causing increased suicide rates. When we have hope for the future, it makes us feel protected. So If you’re having a bad day, just remind yourself that things will be better soon.
Most of us no longer have a solid sense of the future, but we are told to view this as a form of liberation. The truth is that having a stable image of ourselves in the future gives us perspective. It makes us think, "Okay, I’m having a shitty day. But I do not have a shitty life.” This prevents us from generalizing life as being terrible whenever we have a bad day.

Your brain adapts to your needs constantly. It primarily accomplishes this through two methods: pruning the synapses that aren’t used and expanding the synapses that are used. This neuroplasticity continues as long as you live.
Depression and anxiety are not like a tumor, where something grows in the brain because of a blunder in the tissue that precedes psychological problems. Instead, the changes occurring in our brains and anxiety are caused by our environment.

Inheritance accounts for 37% of depression, while 30-40% for severe anxiety. While our sensitivity is sometimes markedly increased by genes, they are not the primary root of our problems.
True enough, our genetics influence depression and anxiety, but external factors and psychological triggers also significantly contribute to these. These external factors may include lack of exposure to nature or problems in the workplace, while psychological triggers may include a sense of worthlessness, feeling of inequality, etc. Your genes can then amplify those factors, but they cannot produce them on their own.

“And it was only by doing that—by being released into something bigger than themselves—that they had found a release from their pain.”

To decrease the probability of experiencing depression and anxiety, we need to reconnect to the following: