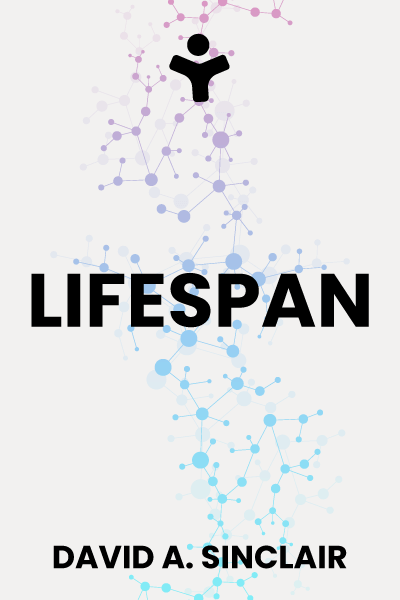 Lifespan: Why We Age—and Why We Don't Have To

by David A. Sinclair

Lifespan reveals what may be the fundamental reason why we age. Being able to answer this question allows us to address aging at its source, enabling us to not only slow but also reverse it. We now live in an era when the ability to live significantly longer and healthier is no longer a distant dream but a rapidly approaching reality through scientific breakthroughs in aging, genetics, and precision medicine. As an eye-opening and intriguing read, this groundbreaking book will challenge your basic assumptions about what it means to be human.

“What if we could be younger longer? Not years longer, but decades longer. What if those final years didn’t look so terribly different from the years that came before them?”

Every year, billions of dollars are spent on research for diseases such as cancer, heart disease, diabetes, dementia, etc. As we age, we expect to encounter one of these formidable health challenges and hope that the treatment provided by the hospital will be effective. If we win the battle, we get released from the hospital— at least until next time.

We know and accept that the older we get, the more these diseases are likely to manifest in our lives, and with each encounter, our chances of dying increase. We all fear spending our final years, or even decades, in ongoing suffering from the effects of age and the diseases it brings.

We accept this view of aging simply as the way things are or as inevitable. But what if aging wasn’t just an inevitability? What if it was the disease itself? And what if that disease was treatable?

If a single cause of aging could be identified, then perhaps it could be treated as if it were its own disease. Current research shows that epigenetic information loss is the cause of aging. The epigenome is in charge of which genes are turned on and turned off within a cell, giving each cell a particular identity (e.g., a skin cell).

Imagine your genome as a grand piano, with each about 20,000 genes representing a key. The epigenome selects which genes to activate to produce a cell with a distinct identity and function, much like a master pianist combines various keys to produce a given song.

In this fantastic piano concert that is your life, your epigenome begins with a breathtaking, flawless performance immersed in the perfect flow, producing the beautiful music of your genome that makes you, you.  Then at some point, the pianist suddenly misses a key. Since it’s such a rich and complex piece, you hardly notice it.

This illustrates the “Information Theory of Aging,” which proposes that this “epigenetic noise” is the cause of aging. This theory came from Sinclair’s work with sirtuins, enzymes that have the epigenetic function of controlling which genes get turned on and turned off. They also have a secondary function of repairing DNA.

The sirtuins and other longevity genes are part of an evolutionary “survival circuit” that activates when times are tough, causing cellular growth to slow while energy is diverted to DNA repair.

The problem is that every time this diversion occurs, epigenetic noise accumulates. Genes that are supposed to be off are switched on, and vice versa. Cellular identity is confused. As the need for DNA repair increases, the epigenetic pianist becomes increasingly distracted. Eventually, the concert is ruined.

“... no matter who you are, where you live, how old you are, and how much you earn, you can engage your longevity genes, starting right now.”

The new science emerging around longevity does not excuse us from making important lifestyle choices. Rather, it reveals the power that certain choices can have on both the quantity and quality of our life.

If we can boost the activity of sirtuins and other longevity genes, we can reduce epigenetic noise, heighten cellular defenses, and slow aging. The good news is that we can make several simple lifestyle choices to achieve it.

We’ve probably all heard the phrase, “What doesn’t kill you makes you stronger.” This idea rings true at a biological level through a process called hormesis, where a degree of stress and adversity causes the body to “hunker down,” activating the longevity genes.

The key to this is the right kind and dosage of stress since too much of a given stressor may actually cause permanent damage. Some key practices that we can use to activate our longevity genes through hormesis are intermittent fasting, low-protein diets, deliberate heat and cold exposure, and certain types of exercise.

A Better Pill to Swallow

“There will come a time in which significantly prolonged vitality is indeed only a few pills away; there are too many promising leads, too many talented researchers, and too much momentum for it to be otherwise.”

Beyond the handful of lifestyle changes are several vitality molecules you can take to boost your body’s longevity genes and keep the epigenome running smoothly. Rapamycin is one such compound that can increase the lifespan of yeast cells and fruit flies.

Similar to sirtuins, there is a complex of proteins in the body called the target of rapamycin (TOR, or mTOR in mammals) that signals cells to “hunker down” in tough times, initiating DNA repair and promoting overall cellular health. Rapamycin inhibits the TOR pathway, bringing these longevity benefits.

While large doses may be toxic for humans, hundreds of researchers are studying rapalogs, which inhibit TOR but are less toxic. While this is still being studied, there are steps we can take now that bring similar benefits.

Metformin is a drug prescribed for type 2 diabetes, which interestingly has been shown not just to lower blood sugar but also to promote overall longevity and lower the risk of many diseases. The longevity benefits of metformin include activation of sirtuins and restoring mitochondrial function. Metformin also triggers the creation of nicotinamide adenine nucleotide (NAD).

NAD is a chemical that is critical for many biological processes but is particularly relevant because it fuels sirtuins. As we age, NAD levels decrease, causing sirtuins to work inefficiently. The result is increased epigenetic noise manifesting in all the signs of aging.

If NAD levels are increased, aging can be slowed or even reversed. The most effective way to boost our NAD levels is by taking a NAD precursor called nicotinamide mononucleotide (NMN). NMN is so efficient at raising NAD levels and slowing/reversing aging that it was able to turn elderly mice into the mouse equivalent of an ultramarathoner.

Resveratrol is another sirtuin-activating compound, an antioxidant that’s found in red wine. Grapes and other plants that experience stress produce more resveratrol. Plants, like humans, benefit from hormetic stressors by producing certain chemicals that activate their survival circuits and increase longevity.

Many of such chemicals from plants give us the same perks. Resveratrol, however, is limited in its effects in humans compared to yeast cells, fruit flies, and mice in the lab. Nevertheless, Dr. Sinclair takes one gram of it per day!

“Aging is going to be remarkably easy to tackle. Easier than cancer.”

Since we have begun to crack the code on aging and longevity, research and innovation are relentlessly pushing us forward to the point where significantly extended lifespans will become the norm. Not only will we be adding years to the average human lifespan, but those years will be characterized by health and vitality, not long-term struggles with diseases.

The following innovations, which are currently being developed and researched, will fundamentally change our experience of aging in the near future:

These are the technologies that are going to fundamentally change the way we understand aging, disease, and medicine. The impact of these technologies on individuals is decades of additional life and health.