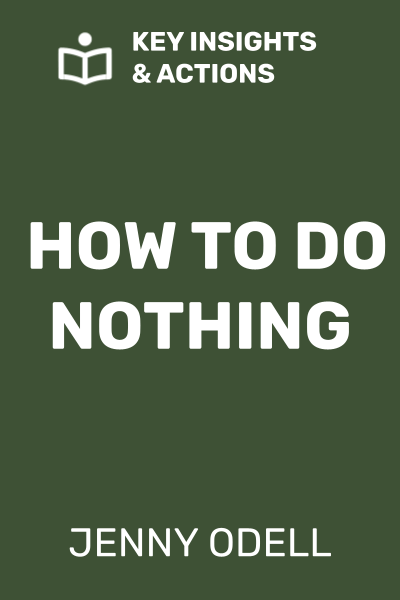 How to Do Nothing: Resisting the Attention Economy

“Doing nothing” does not imply leaving society or chasing asceticism. Instead, it inspires people to divert their attention from social platforms that treat them as algorithms towards something else, something more meaningful. Doing nothing opposes the capitalist societal idea of constantly being productive and emphasizes the importance of curiosity and developing space and time for establishing true communication.

“Nothing is harder to do than nothing.”

In our predominantly materialistic world, people are becoming increasingly obsessed with productivity and financial gains. This world leaves very little space for authors, thinkers, artists, and dreamers. These individuals are often perceived as unproductive and less significant because they are not pressured into optimizing every aspect of life.

Doing nothing, which is by no means a call for inertness and indifference, in the strongest sense, is an act of political resistance to the attention economy. The “nothing” which is proposed here can be construed as “truly nothing” by a capitalist society that condemns and punishes lack of productivity. However, this is actually an action plan. It is important to note that “doing nothing” is not associated with merely taking a vacation or some time off before returning to the work post and becoming more productive by optimizing the work process. As a matter of fact, the main point is to challenge the idea of productivity and what it actually means.

What is being proposed is to deepen our attention to the world around us and renew our connections to the natural world, to people, and to the community. This proposal does not negate the role of technological advancement, but it does criticize the way social platforms draw, buy, and sell our attention. Social platforms do not consider us to be humans. Instead, we are algorithms. Our attention and our state of anxiety, fear, and mindless distraction are highly profitable.

Therefore, “doing nothing” means opposing and resisting the attention economy, but it also means directing our meaningful attention towards something else. That includes becoming more aware of the various life-forms around us and how they are connected and intertwined.

By resisting the attention economy, you will start perceiving the world in a new light. The hours you spend checking your social media can be dedicated to something else more rewarding.

The Case for Nothing

“ ‘Nothing’ is neither a luxury nor a waste of time, but rather a necessary part of meaningful thought and speech.”

For people to find the right words to express a valuable opinion, they need periods of solitude and silence. These silent gaps provide the framework for establishing and producing meaningful thought and speech.

Solitude and quiet help us direct our attention to the world surrounding us. When we pay close attention to different life-forms, we start to recognize patterns and make distinctions and parallels between them.

In a capitalist world where everything needs to be optimized and every performance needs to be improved, “doing nothing” becomes very expensive. Nevertheless, it is necessary if we wish to become more present in the world we live in and if we want to know ourselves better.

There are a few tools that will assist us in resisting the attention economy. As mentioned previously, we need time spent in silence, tranquility, and reflection. Another tool is to start the practice of deep listening. Deep listening is listening directed towards understanding each other as natural parts of the natural world.

Take time to listen and to reflect.
Mindfulness   3

The Impossibility of Retreat

“There is no such thing as a clean break or a blank slate in this world.”

There are numerous examples of people in literature and history who decided to leave the place they lived and start over. Some of these people are like the solitary mountain hermits of East Asia, but some are regular people who tried building a society different from the one they were previously a part of.

These types of escapes can seem very appealing, especially after feeling burnt out in a ruthlessly busy, ever-changing society. However, in reality, such escapism rarely lives up to the optimistic idea which originally prompted it.

Getting away from hectic city life and social media may inspire us to perceive the world differently. This can be a highly rewarding and fulfilling experience.

Anatomy of a Refusal

“If enough individual people decided at once to exercise their moral judgment instead of continuing to play the game, then the game might actually change for once.”

There is something strangely unsettling in the workplace when people appear to be doing nothing. It can be seen as threatening to the work process and order. In fact, the potential to do nothing is everything.

The workplace, which is almost always seen through the prism of productivity, leaves little space for any type of refusal. This statement has a much wider application. In society, people are often directed to follow certain rules and standards, even when these rules go against moral convictions and judgment. If all the people who feel this way rise against the social framework, there will be a true opportunity for the world to be changed for the better. However, not all people feel that they have the luxury to refuse to follow rules. Most of them have a lot to fear, especially if there aren’t any organizations supporting them.

Abuse comes in many forms and destroys different parts of our lives. Presently, there are many systematic abuses, but a good place to start is to fight against the abuse of our attention. The goal is to invest our attention towards something else that does not see us merely as algorithms. This happens consciously and helps open our minds even further.

By refusing to complete tasks that aren’t beneficial, we regain control of our attention. Moreover, if more people try to disconnect themselves from the attention economy, they will become more genuine and will start listening and perceiving the world in a deeper sense.

“Practices of attention and curiosity are inherently open-ended, oriented toward something outside of ourselves.”

Conscious attention is directly linked to curiosity. Curiosity is the driving force of discovery, and it should not be limited to children. Curiosity is so powerful that it makes you forget about everything else. Through attention and curiosity, we can see people and our surroundings as multidimensional. They will open us to new experiences, new feelings, and a new understanding of the world. In this sense, attention can be perceived as a state of openness.

External distractions might be described as annoying, but on a larger scale, they can prevent us from living the life we want to. Therefore, becoming mindful of how we direct our attention is critical to living a more fulfilling life.

We are surrounded by countless life-forms and objects. But only the things that interest us can shape our experiences. Therefore, when we direct our attention to something, we see it with “new” eyes. Even things that have always been present may appear alien after we’ve paid attention to them.

It is extraordinary how much we can learn from even well-known surroundings. We will become more open-minded if we show curiosity about the world around us.

Start noticing the world around you.
Mindfulness

Restoring the Grounds for Thought

“What if we spent less time shouting into the void and being washed over with shouting in return—and more time talking in rooms to those for whom our words are intended?”

Successful dialogue requires time and space. Moreover, to be able to truly understand anything, you need context. In fact, context is crucial for understanding any piece of information.

Using social media means that we are bombarded with information nonstop. We often lack the context to properly process this information. The lack of context, or context-collapse, hinders understanding. Doing research presents the opposite process. You are directing your attention consciously to acquire data on a topic you are curious about, which is quite different from your social media news feed.

In addition, your news feed is full of people who use social media platforms to voice their opinions and their thought processes publicly, without ensuring that they will reach the right audience.

Finding or developing the right space and time to reach out to people is crucial if we desire our words to reach the intended audience.

Lay the groundwork for a successful dialogue—an open channel of communication where the message will reach the intended audience.

“That which was viewed as primitive and backward is now unexpectedly seen to be far ahead of modern science.”

If you show interest in a place in terms of nature or culture, you will likely witness more destruction than progress.

The irony is that innovation is always linked to something which is newly created or designed. However, sometimes true progress requires the removal of such design, especially if nature itself is the better designer.

Sometimes natural processes should run their course with very little interference by humans. If you are wondering what humans are supposed to do, the answer is to look and listen.

Accepting that nature’s design can be far superior to human design can make us more peaceful and help us direct our attention both outwards and inwards while enjoying the beauties of the world.