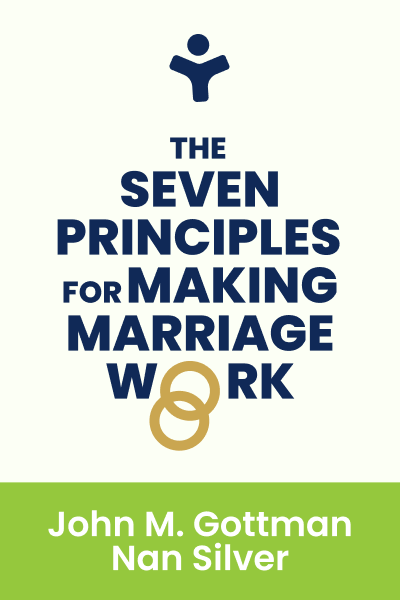 The Seven Principles for Making Marriage Work: A Practical Guide from the Country's Foremost Relationship Expert

John Gottman revolutionized the study of marriage by observing the habits of married couples in his “Love Lab” in Seattle. By using scientific approaches and procedures and recording every detail of the observations of married couples in this lab over the course of many years, Gottman identified several key principles for a long-lasting relationship.

Inside the Seattle Love Lab: The Truth About Happy Marriages

“One of the saddest reasons a marriage dies is that neither spouse recognizes its value until it’s too late.”

Dr. Gottman can predict in as little as five minutes if a marriage will last as he observes from his “Love Lab” in Seattle, Washington. These predictions are not based on intuitions or preconceived notions about what marriage “should be.” These predictions are made from data accumulated over years of study. What makes marriage work is surprisingly simple. Happy marriages are emotionally intelligent marriages. The more emotionally intelligent a couple, the better they understand, honor, and respect each other. There are many exceptional reasons to work to save your marriage, including a better immune system and overall longevity. People who stay married live four years longer than people who don’t. Most marriage therapy fails because of many culturally accepted myths about what makes a marriage work. It’s more than just learning to communicate better! By learning to follow the several principles that Gottman has observed, a couple can make their marriage last.

How I Predict Divorce

“Couples who are deeply entrenched in a negative view of their spouse and their marriage often rewrite their past.”

Anger and argument between a husband and wife don’t predict a marital meltdown. It’s the way they argue that may predict a future breakup.

There are six common observable signs that can predict future issues.

If a discussion between spouses begins with negative accusatory remarks, or critical, sarcastic, or derisive comments—any form of contempt—this is a “harsh start-up” and will inevitably end on a negative note.

As a conversation unfolds, there are four specific types of negative interactions that are lethal to a relationship. They are called “The Four Horsemen”. They are:

Flooding means that your spouse’s negativity—whether in the guise of criticism, contempt, or defensiveness—is so overwhelming and so sudden that it leaves you shell-shocked. All you can think about is protecting yourself from the turbulence. This leads to a disengagement from the relationship.

Flooding leads to severe emotional distress that engages physical manifestations such as increased heart rate, sweating, etc. When your body goes into overdrive during an argument, it is responding to a very primitive alarm system. Body language signals these alarms, and the response is automatic. The human body has not refined its fear reactions. Whether you are facing a saber-toothed tiger or an angry spouse, the body reacts the same way. It is a biological fact that men are more easily overwhelmed by marital conflict than their wives.

Repair attempts save marriages because they decrease the emotional tension between spouses and also lower the overall stress level. This prevents your heart from racing and feeling flooded. When a spouse attempts to make a repair during an argument or following one, and it is rebuffed, ignored, or unrecognized, it leaves the issue unresolved. This leads to further tension and flooding.

When a relationship becomes negative, it’s not only the couple’s present and future life together that are put at risk. Their past is put in danger as well because many couples will rewrite past experiences in their mind, turning them negative. In happy marriages, couples tend to look back on their early days together fondly. But when marriage is not going well, history gets rewritten for the worse. The focus tends to fall on negative past experiences and any positive past experiences get overrun.

“Emotionally intelligent couples are intimately familiar with each other’s worlds.”

Principle 2: Nurture Your Fondness and Admiration

“Fondness and admiration are two of the most crucial elements in a rewarding and long-lasting romance.”

A fondness and admiration system means that a couple has a fundamental sense that their spouse is worthy of being respected and liked. Even in a marriage on the brink of collapse, a couple that still has a functioning fondness and admiration system has a salvageable marriage. Although happily married couples may be distracted at times by their partner’s personality flaws, they still feel that the person they married is worthy of honor and respect. Fondness and admiration are antidotes for contempt. If you maintain a sense of respect for your spouse, you are less likely to act disgusted with them when you argue or disagree.

Discover the history and philosophy of your marriage.
Romantic relationships

Principle 3: Turn Toward Each Other Instead of Away

“Hollywood has dramatically distorted our notions of romance and what makes passion burn.”

What might seem like insignificant or boring chitchat between couples is actually a pretty good sign that marriage will last. What’s happening in these brief, little exchanges is that couples are connecting. They are turning towards each other. In couples who go on to divorce or live together unhappily, such small moments of connection are rare. In marriage, people periodically make what are called “bids” for their partner’s attention, affection, humor, or support. People either turn towards each other after these bids or they turn away. Turning towards each other is the basis of emotional connection, romance, passion, and a good sex life. Couples who turn towards each other remain emotionally engaged. Couples often ignore each other’s emotional needs out of mindlessness, not malice. Paying attention to these small bids, or mundane moments, can increase your marriage’s stability and also its ongoing sense of romance.

Principle 4: Let Your Partner Influence You

“Statistically speaking, when a man is not willing to share power with his partner, there is an 81% chance his marriage will self-destruct.”

In a long-term study of 130 couples, the Gottman Institute found that men who allow their wives to influence them have happier marriages and are less likely to divorce. The point of the chapter is not to single out the men, but to emphasize that honor and respect is important in a marriage. Data from the studies suggest that most women already consider their husbands’ input in decision-making, but culturally many men struggle to share power in a marriage. The happiest and most stable marriages are those where husbands and wives do not resist power-sharing. When couples disagree, it is imperative that both actively search for common ground. The wives of men who accept their influence are far less likely to be harsh with their husbands when broaching a difficult marital topic.

The Two Kinds of Marital Conflict

“Despite what many therapists will tell you, you don’t have to resolve your marital conflicts for your marriage to thrive.”

All marital conflicts, ranging from mundane annoyances to all-out wars, really fall into one of two categories. Either they can be resolved, or they are perpetual, unresolvable problems. Once you can define your various disagreements as either one or the other, you’ll be able to customize your coping strategies. When choosing a long-term partner, you will be invariably choosing a particular set of unsolvable problems that you will be grappling with for the next ten, twenty, or thirty years. One way to identify solvable problems is that they seem less painful or intense than perpetual problems. When you argue over a solvable problem, your focus is on a particular problem that is temporary. In solvable problems, it is important to set aside tension or blame and work together creatively to resolve the issue. For perpetual problems, it is important to identify the underlying issue at the core of the argument. It is helpful to develop a willingness to explore hidden issues that are creating gridlock from perpetual problems. The basis for coping effectively with either kind of problem is the same: communicating basic acceptance of your partner. If either or both of you feel judged, misunderstood, or rejected by the other, you will not be able to manage the problems in your marriage.

“You don’t have to agree with everything your spouse says or believes, but you have to be honestly open to considering his or her position.”

When a husband and a wife respect each other and are open to each other’s point of view, they have a good basis for resolving any differences that arise. By observing and studying what successful couples do to resolve conflicts, Gottman has developed a five-step model for resolving conflict in a loving relationship. The fifth principle, “Solve Your Solvable Problems,” entails the following steps:

“Scheduling formal griping sessions can prevent the spillover of everyday stress into your marriage.”

Work stress, in-laws, money, sex, housework, children, or a new baby: these are the most typical areas of marital conflict. Even in happy, stable marriages, these issues are perennial. When there is conflict in one of these common areas, usually it’s because each spouse has different ideas about these things. Since these topics come up frequently, it can be beneficial to discuss these difficult and frequent conflicts and develop strategies that work for both of you. Here are the six hot spot issues that most marriages face:

“Gridlock is a sign that you have dreams for your life that aren’t being addressed or respected by each other.”

Gridlock is another term for the perpetual problems you can’t seem to solve. The goal in ending gridlock is not to solve the problem, but rather to move from gridlock to dialogue. To navigate your way out of gridlock, you first have to understand its cause. Underlying the gridlock is usually a dream, such as hopes, aspirations, or wishes that are part of your identity and give purpose and meaning to your life. Happy couples understand that helping each other realize their dreams is one of the goals of marriage. One way to approach unlocking gridlock is to try to uncover the dream or hidden desire that is causing it. This starts a dialogue that can begin to approach the real underlying issue.

“A culture can also be created by just two people who have agreed to share their lives.”

Marriage isn’t just about raising kids, splitting chores, and making love. It can also have a spiritual dimension that has to do with creating an inner life together. Usually, when we think of culture, we think in terms of large ethnic groups, or even countries where particular customs prevail. But culture can be created by a couple. In essence, each couple and each family create its own microculture. When a marriage has this shared sense of meaning, conflict is much less intense and perpetual problems are unlikely to lead to gridlock. The more shared meaning you can find in your marriage, the deeper, richer, and more rewarding your relationship will be. Displaying symbols (pictures, mementos, or objects) around the home and establishing rituals (meals together, family vacations, weekly dates, daily prayer, or meditation) are ways to develop a culture for your relationship and family.