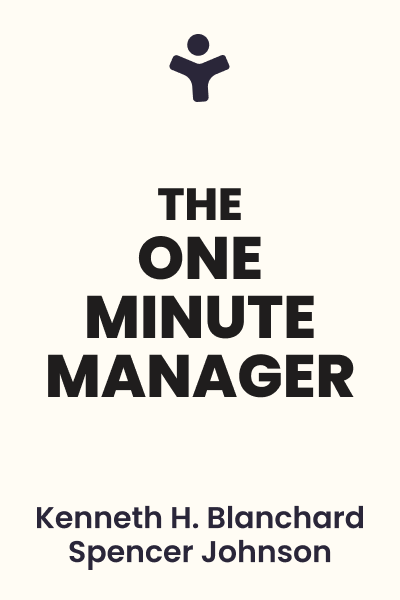 The One Minute Manager

The One Minute Manager is a book that quickly shows you how to implement very practical management techniques in your life. In the section, you will find several studies in medicine and behavioral sciences that will show you why these simple methods work so well. And the most important - how to apply them in your life!

The One Minute Manager

“People who feel good about themselves produce good results”

The biggest value of the company are people. Most companies spend 50-70% of their budget on people’s salaries, but only 1% to train them.

Recognize workers as a person not only the name. See their strengths and weaknesses  Learn their potential and that they are your most important resource to the company.

The First Secret: One Minute Goals

“Feedback is the Breakfast of Champions”

It is recommended that each goal is no more than one page and no more than 250 words. Goals should be very clear, but the way of getting results can depend on workers. It is good to give workers freedom, but a good manager from the beginning shows how to solve problems and teaches the workers how to do the tasks by themselves. Many people at the beginning are afraid of making decisions by themselves and only see the problems. Very often “a problem” is only in our minds, but if you think about it as steps in a todo list, “the problem” is less frightening and disappears.

Good managers never assume anything when it comes to goal-setting and always clearly explain the expectations. People are motivated by results. In order to have motivation, they should know the intended goal. The second important issue is training. It is hard to find only the “Winners”, but by training people you can build them to be as such. It is stated to not expect having a few “Winners”, a few “Losers” and many average workers; you can have many “Winners” and no “Losers”. “But with everyone, winner or potential winner, One Minute Goal Setting is a basic tool for productive behavior."

Communicate with the workers in a short, clear and specific way. They will solve the issues by themselves.

The Second Secret: One Minute Praisings

Praising people you manage is the second “secret” of One Minute Management. The first step is observing workers’ activities very closely to catch them doing something right. When you notice it, go to them and make appropriate contact, such as a handshake, or a hand on the shoulder, followed with a positive affirmation. The praising should be done as soon as possible. Be consistent with it, it should not take more than a minute. After awhile, people begin to catch themselves doing things right and start commending themselves.

The key to train the workers and to have the work done well, is to divide the big goals into smaller ones. Every time a person completes a part they should be rewarded. A good manager should not give a big goal to the new or less experienced worker expecting good results only to then punish them if it is not fulfilled or done properly. Assign the smaller goals to the workers best suited for the job in order to complete the bigger end goal.

People will feel good in the organization and a sense of belonging to it. They will try their best to be recognized as well as for their work.

If people feel the goal is unattainable, they do not understand what we want from them. By dividing the goals in to smaller goals or steps, and praising people for fulfilling them, we will get the work done.

Praise your workers in an effective way
Workplace communication

The Third Secret: One Minute Reprimands

“Do not attack a person—only a behavior—it’s easier not to become defensive.”

There are not just One Minute Praisings, but also One Minute Reprimands. What is very important when using them is to let people know that they are going to be reprimanded. It should be done immediately and very specifically. Besides describing what they did wrong, it is important to say how you feel about it. This is the first part of the reprimand and should not take more than 30 seconds. In the second part, shake hands, remind them how valuable they are to the company, and that you are commenting only the behaviour not them as a person. Remember that when the reprimand is over, it is over.

If a worker is not doing the work well, they will get the objective feedback. They will not be afraid of it, and it will be motivating. After the reprimand feedback, they will try to avoid committing the error again.

Reprimand your workers in the short and effective way
Workplace communication