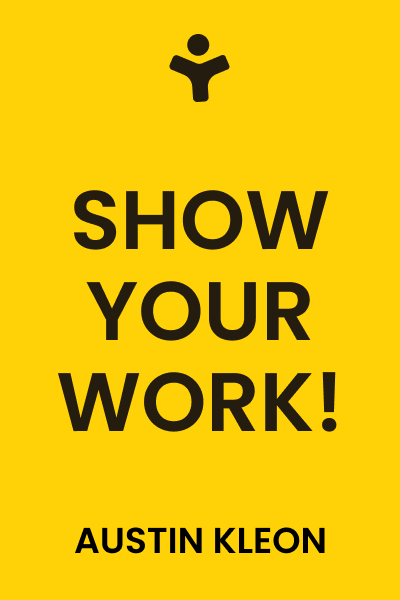 Show Your Work!: 10 Ways to Share Your Creativity and Get Discovered

This book opens our minds to creativity. It will teach you how to create successfully, stay consistent with your creative work, get an audience, and share your creative work, all while charging fairly. The book contains many great simple ideas and techniques that every creative artist should know.

“There are a lot of destructive myths about creativity, but one of the most dangerous is the lone genius myth: An individual with superhuman talents appears out of nowhere at certain points in history, free of influences or precedent, with a direct connection to God or The Muse.”

A common cliche holds that creation is an antisocial act undertaken by just a few exceptional personalities and geniuses. When we go back in history, we see that many of the people we think of as lone geniuses were a part of an entire scenario of individuals helping each other, gazing at one other's work, copying, and stealing ideas. There is a healthier way of thinking about creation - being "scenius” instead of genius.

The term “scenius” refers to the fact that great ideas are frequently born under this process; a gathering of creative people—artists, curators, intellectuals, theorists, and so on.

Scenius does not diminish the accomplishments of those outstanding people; instead, it recognizes that excellent work is not generated in isolation and that creativity is the consequence of a mind connected to other minds. Being a valuable member of a scenius is determined not by how brilliant or skilled you are but by what you have to offer—the ideas you exchange, the quality of the relationships you create, and the discussions you initiate.

Be a scenius
Artistic creativity

“The act of sharing is one of generosity—you’re putting something out there because you think it might be helpful or entertaining to someone on the other side of the screen.”

People want to see what we do, not just the end result. That is why we should share our work processes on social media daily. We can share pieces of our project, how we work, a journal of the creative process, and the work of those who inspire us. So, we can share our creativity and sources of our inspiration.

When we make sharing a habit, we'll see patterns and tendencies emerge in what we post on social media. When we see these patterns, we may begin to piece them together into something significant. For example, many ideas in this book started as tweets, blog articles, and book chapters. Small things can grow into great things over time.

When we share our skills and work process, it does not mean our work loses value, but we give and get something valuable because people become more interested in us and our work.

“Words matter. Artists love to trot out the tired line, “My work speaks for itself,” but the truth is, our work doesn’t speak for itself. Human beings want to know where things came from, how they were made, and who made them.”

People are drawn to some products because of the significant stories behind them. Valuable and interesting stories sell work.

For example, if you are faced with two identical paintings and are told that the one was painted by a great historical artist and the other by an art school student, you will most likely buy the first one. That is why we must link good stories to our creative works.

The tales we tell about your projects and creative work significantly impact how people feel and think about it, which influences how much they value it. Some effective storytelling methods include:

She gives us the fundamental structure of a fairy tale we may fill in with our elements:

The basic storyline, according to author John Gardner

He explains that the storyline of almost all stories is as follows: A character wants something, pursues it against obstacles, including his own doubts, and so arrives at a win, lose, or tie.

The first act occurs in the past, the second in the present, and the third in the future. The first act is about where you've been—what you desire, how you got it, and what you've done so far to acquire it. The second act describes your current position in your career and how you've worked hard and exhausted most of your resources. The third act is about where you want to go and how the person you're pitching can help you get there.

Storytelling is a necessary skill for every artist, creative person, and anyone who wants to turn their hobby and creative work into a job.

Tell a good story behind your work/product
Writing

“Designer Mike Monteiro says that the most valuable skill he picked up in art school was learning how to take a punch. He and his fellow classmates were absolutely brutal during critiques. “We were basically trying to see if we could get each other to drop out of school.” Those vicious critiques taught him not to take criticism personally. ”

When we reveal our work and products, we must accept that we may face criticism. That is why we must learn to handle it. The metaphorically described method of enduring criticism punches consists of these five tips:

“We all have to get over our “starving artist” romanticism and the idea that touching money inherently corrupts creativity.”

We all have to pay for living expenses, no matter what job we have, which is why getting paid for your work is acceptable. However, it must be charged correctly. There are different ways of charging for your services.

If you don't want to specify a certain price and sell directly, try asking your audience for donations. You may accomplish this by including a contribution button on your website.

If you are more confident of the worth of your product, simply set a price and sell it. One of the most effective ways to sell is through mailing lists.

If you want to try your luck at anything that requires some upfront funding, platforms like Kickstarter and Indiegogo make it simple to organize fund-raising campaigns with tiers of prizes for donors. Remember that these platforms operate best when you already have a group of individuals interested in what you do.

Before deciding on any selling alternative, it is essential to establish trust with your followers and audience and connect with them genuinely.

We should not be afraid to charge for our services, but we must do it sensibly by establishing its worth and pricing realistically.

“The people who get what they’re after are very often the ones who just stick around long enough. It’s very important not to quit prematurely.”

One of the most important factors to success is not giving up and remaining consistent in our work.

Famous and prominent artists have developed their careers simply because they did not give up and worked nonstop (also called the chain-smoking strategy).

For instance, Guided Voices' Bob Pollard writes continually, but Ernest Hemingway would pause in the middle of a sentence at the end of the day so he could continue there the next morning. Woody Allen has made one movie a year for more than four decades because he never takes a break: the day he finishes one, he begins drafting the script for the next.

Chain-smoking is a working strategy in which we work creatively without taking breaks, which might be exhausting on the one hand.

To better manage this, we need a “sabbatical," which means taking a long break after several years of constant work. Stefan Sagmeister, for example, takes a year off and closes his studio every seven years. He believes this fantastic rest period will add significant value to our future job since it will allow us to plan what to do or accomplish next after the sabbatical is done.