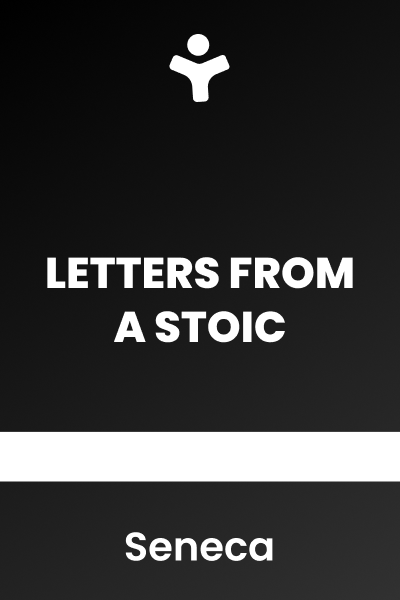 Letters from a Stoic

Moral Letters to Lucilius / Letters from a Stoic constitute a collection of one hundred and twenty-four letters written on a moral note, addressing topics in everyday human life, such as friendship, love, death, virtue, man's connection with nature, study, poverty, happiness, peace of mind, or human duty in society. All these topics are approached from a stoic perspective, so the text acquires philosophical significance. Moreover, we can analyze the different teachings of Seneca.

In Volume 1: Letters 1 to 65, Seneca reviews topics related to human desires for material possession. The Stoic philosopher offers explanations of what wealth means and addresses the importance of wise behavior and exemplary thinking in society.

Seneca teaches his friend Lucilius about these concepts of life and addresses one of the basic concepts of Stoicism, which is to live life by nature and understand it as a part of a whole. The author talks about how nature functions and how man must live according to it, not against it, but being part of it.

Seneca speaks of virtue as one of the critical elements of a life lived according to nature. The author talks about the connection between virtue and death and how a life lived with virtue is a good life, regardless of its social aspects. Seneca places virtue above all the other goods of the world, emphasizing the lasting happiness it can bring you, absolute happiness compared to that which vice or other pleasures can bring you.

Visualise your life without the things you love
Self-awareness

Invite discomfort into your life
Self-compassion

Balance your happiness with your success
Self-awareness

Become a more courageous version of yourself
Growth

See a new day as a new beginning
Self control

“Nothing is more excellent or more beautiful than virtue; whatever we do in obedience to her orders is both good and desirable.”

In volume 2: Letters 66 to 92, the subject of death is addressed. This time, the teachings of Stoic philosophy are highlighted by the relationship between death and nature. Seneca talks about the equality of death and the irrelevance of the duration of human life, an idea often encountered among this philosophical current, even in Marcus Aurelius or Epictetus.

Seneca explains to Lucilius his duties as a citizen of the society and how he should behave with the people around him, regardless of their social status. Although social life and the duty of a citizen were the most important aspects of life for Cicero, Seneca opposes this perspective and places virtue as the ultimate goal, virtue through which you can find your happiness.

However, he does not neglect the social aspects in any way and talks about the importance of respecting our role in society, but also of our own choice about the role we want to play.

Another important topic the Stoic discusses is morality, which Seneca relates to virtue and designates as part of it. He argues that a virtuous man is a man who uses reason properly, that ethics and moral principles are what is really in our nature, and that decisions made against morality are decisions made against one's nature.

Memento mori (remember that you [have to] die)
Life philosophy

Stand out from the crowd
Life philosophy

Practice your values ​​instead of talking about them
Life philosophy

Give yourself time to think
Problem-solving

“Don’t ask for what you’ll wish you hadn’t got.”

Volume 3: Letters 93 to 124, compresses letters with different subjects: friendship, the relationship between man and the universe, the human spirit or ambition.

Nonetheless, reference to a high ambition is not of a positive nature. The Stoic philosophy is known for its strictness regarding the needs of the body, that strictness that requires a light diet, a diet that will satisfy our hunger, not one that will make our body heavy and cause further health issues.

Seneca mentions the importance of temperance in the face of these needs and even urges fasting on certain days, not to subject the body to torment, but to get it used to less, in case difficult days come.

The last five letters from the book are devoted to the subject of wisdom and how it can be learned through philosophy.

The three pages of biographical notes at the end of the book present essential aspects of Seneca's life, such as his studies, travels, health problems, exile, work, role in human society, and death.

Practice moderation in all the aspects of your life
Self-control

Focus on reaching your potential and ignore the trivial things
Relaxation

Cultivate patience, as it is a golden asset
Growth