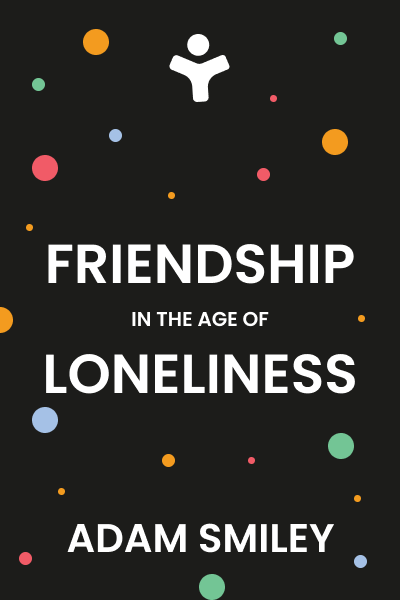 Friendship in the Age of Loneliness: An Optimist's Guide to Connection

A warm and inspiring guide that proposes a new solution for the increasing pressures of digital life. The book offers practical habits on how to make new friends and deepen your existing relationships. Not only will you learn how to develop a healthier relationship with social media, but you’ll also discover how to prioritize real-world experiences to keep your social bonds alive. This book will remind you of the need to ritualize your friendships if you truly want to enjoy stronger, happier, and more meaningful connections.

Be more playful and authentic

“Affirmation is largely undervalued in our society. We’re so used to hearing what we’re not good at. The simple act of telling someone that they can be themselves, that they’re already doing a great job, that they are okay exactly the way they are is incredibly powerful”

Before the advent of cell phones and social media, people spent a lot of time engaging in face-to-face social interactions. If you wanted to make friends, you had to physically spend time with them and get to know who they really are. But in today’s world where people interact primarily via their devices, it’s increasingly difficult to create friendships that matter. Though social media has done a good job in helping people find each other, it has also weakened our ability to be authentic with one another.

Most people spend time on social media seeking clout and pretending to be something that they are not. Some people mindlessly copy the fake lifestyles they see on Instagram without realizing that the influencers they’re trying to mimic are not as happy as they portray themselves to be. The reality is that more people are beginning to crave the old way of making friendships i.e. by having meaningful physical contact with a fellow human. They are tired of the same old conversations that are centered on meaningless things like what a person does for a living or where they live.

At the end of the day, we all know that we need genuine relationships that allow us to be authentic and free. But these relationships do not happen by accident. You have to be intentional and take the first step in creating the kind of wholesome connections you desire to have. You have to become the kind of friend that you want before you seek friendships from others.

Be a better friend

We all enjoy the feeling of being part of a group. When we’re with friends, we say or do the “right thing” just to get them to accept us. Sometimes we even sacrifice who we truly are just to feel a sense of belonging. Unfortunately, this can lead to mental and emotional imbalances. Anxiety, self-doubt, and depression may set in, and this can negatively affect your ability to communicate and maintain good relationships.

If you cannot fully be yourself, then you’re likely to approach your relationships in a similarly deceptive manner. You interact with people in a way that helps you maintain the façade instead of focusing on establishing a connection based on mutual love, respect, and curiosity. How then can you be a good friend to someone if you can’t even be comfortable being yourself?

A true friendship is one that’s based on accepting each other and creating a safe space where everyone can come as they are. This can be done both within your place of work and outside of it. Nowadays, a lot of people spend the majority of their lives at work, so creating reliable friendships at the office is also important. If you’re going to lean on each other as friends, you have to be prepared to be authentic with yourself.

Create a better relationship with yourself before connecting with others
Socializing

Invest in your friendships

When you attend a networking event, you’re probably going to be in a room with hundreds of people for a few hours. However, that doesn’t mean that all the people you’ve met are now your friends. Building a friendship is a slow process that takes a lot of time. Research shows that it takes at least 50 hours for someone to become a casual friend and 200 hours for you to feel an emotional connection to them. This means that there has to be repeated exposure to each other before you can have a meaningful connection.

Other than investing time, you also have to put energy and attention into your relationships. Thanks to social media, we’re blinded by the number of friends we have rather than the depth of our connections. The result is that we focus on having as many interactions as possible—though fleeting—instead of strengthening the bonds we already have with our existing friends. As we’re chasing new friends, we fail to realize that the social bonds we already have are weakening.

On top of that, we don’t take the time to identify who’s a real friend and who isn’t. This results in a lot of wasted time cultivating relationships with people who probably aren’t going to reciprocate your kind gestures. If you’re time and energy are valuable, then you have to make sure that you’re channeling these precious resources in the right way and to the right people.

Take the time to build and invest in genuine friendships
Socializing

Stay in touch with those you love

“If you don’t think you have two or three hours a week to call someone you love, I’d challenge you to track how much time you spend weekly on social media, checking email, reading the news, or watching Netflix. You have plenty of time”

Strong relationships are not created by accident. They are the result of making a deliberate and conscious effort to communicate with people who you feel are valuable to you. Very few people go out of their way to stay in touch with the friends they’ve made in the past. This is because we don’t make it a habit to maintain regular contact with people as we grow up or move to different places.

But maintaining close friendships over time and space doesn’t have to be difficult. You just have to change your mindset and overcome the challenges that often inhibit people from staying connected with friends. One of the obstacles to maintaining communication with old friends is the “out-of-touch” guilt spiral. Sometimes you want to call an old friend but you hold back because you feel guilty about the months that have gone by with no contact. But as long as there was nothing malicious about the lull in the friendship, it doesn’t hurt to reinitiate communication with them.

There is no excuse in this day and age to explain why you’re not staying in touch with someone you claim to care about. You can use a variety of tools, including social media. All it takes is a higher level of intentionality and creating rituals to remind you of when to initiate contact.

One of the best things about developing a ritual is that once you’re used to the routine, you don’t have to expend too much time and energy thinking about what actions to take. If you have a ritual where you go to the beach every Sunday afternoon, you already know that no other activity can slip into that block of time. In the same way, you can also create rituals to ensure that you spend time connecting with friends.

Having a specific routine creates a sense of comfort, and comfort enhances and blossoms your friendship. All your friends know what to expect when it’s time to meet up because you’ll be doing the same thing together every time you get together. You can create a ritual based on regular activities such as coffee dates or go on hikes, or you can get creative and do things that are unique to your circle of friends. In a world where it’s increasingly difficult to stay focused and avoid distractions, embracing rituals can help you create powerful friendships.

Become a minister for human connection

Loneliness is a major problem in many countries. In a report published in 2017, statistics showed that a vast number of older people in Britain go for months without having a conversation with anyone. The situation was so bad that the British prime minister appointed a Minister for Loneliness to help combat the problem. However, you don’t have to wait for the government to do something about loneliness in your community. You can take steps to ensure that you connect with people who may be struggling to create and maintain relationships.

It doesn’t take much to reach out to a lonely person. Sometimes all it takes is a simple hello, a handshake, a fist bump, or even a hug. Elderly people are cool to hang out with because they don’t have anything to prove to you. Unlike millennials, they are authentic and don’t act self-important. They also have a lot of wisdom to share with you if you show them that you’re willing to listen. Another group that faces social isolation is women who’ve just given birth. They spend most of their time indoors nursing their baby and barely have the time or energy to engage in their old social routines.

Ultimately, you want to be the kind of person who builds social bridges in your community rather than dividing people. We already have enough divisions in society caused by political affiliation, racism, and many other social ills. In this age, what we need more of are people who recognize the value of strong communal ties that transcend all our perceived differences.