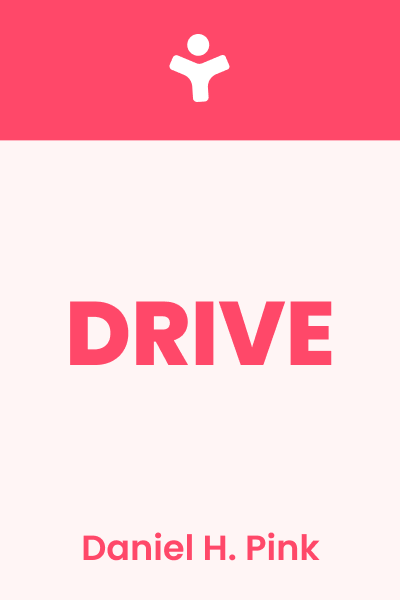 Drive: The Surprising Truth About What Motivates Us

In Drive: The Surprising Truth

Part One: A New Operating System

“Much of our societal operating system consists of a set of assumptions about human behaviour.”

How we organize what we do

Motivation 2.0 means that humans will only do things for profit or gain, or in the hopes of avoiding punishment. However, take non-profit organizations for example, as the way they function directly contradicts this. They favour long-term value and social impact over short-term monetary gain.

How we think about what we do

Motivation 2.0 assumes humans are robotic wealth-maximizers, however, much of human action points to the contrary. For example, many people hold on to bad investments instead of cutting our losses, as we feel more pain in losing money than making back the same amount we had earlier. Another example - people often leave high-paying jobs to pursue something low-paying which gives them a sense of purpose (i.e. a banker quitting his job to become a clarinet player). People are not always motivated by external incentives - more often than not, it is what is intrinsic that drives us.

How we do what we do

Motivation 2.0 assumes that work is inherently unenjoyable, hence the need for external rewards/punishments. However, with the advent of technology, most of the boring, routine jobs have been replaced by softwares and many jobs now require creativity, making them fun! This replaces the need for external incentives; many people work simply because they enjoy their job.

Essentially, relying solely on Motivation 2.0 crushes out creativity and good behavior as people will focus on the reward/punishment and take the shortest route to get there. This also fosters short-term thinking, as people don’t think about what’s beyond the reward/punishment. Instead of relying on a method of motivation purely driven by rewards/punishments, methods that encourage intrinsic motivation and creativity lead to better overall outcomes.

Learn how to motivate your team to complete boring or tedious tasks.
Team management

Learn whether you are a Type X or Type I kind of person.
Mindfulness

“Management isn’t about walking around and seeing if people are in their offices. It’s about creating conditions for people to do their best work.”

Money is only a threshold motivator - i.e. people are motivated to make enough money to support themselves and their families. Beyond that, they will seek jobs that give them autonomy and allow them self-direction - in fact, they will turn down jobs with higher salaries to stay with one that gives them this freedom!

Autonomy is considered one of the most fundamental parts of human existence. People flourish in situations where they are allowed self-autonomy, and they will achieve mastery of their goals.

Furthermore, people are more satisfied when they are following the right goals. Those motivated by money or power tend to be unsatisfied, as they spend less time on building relationships and end up with less love, attention, and care in their lives. Those who are satisfied with their lives are usually striving towards a goal that gives them a sense of purpose and makes them feel like they’re doing something that matters.

Encourage mastery in your team members and/or employees of your organization.
Team management

Inspire purpose in your team and/or employees.
Team management

Part Three: The Type I Toolkit

Most of us were led to believe that Motivation 2.0 is the way to go - to be driven by rewards/punishments, and not by our intrinsic motivation. This mentality bleeds into all aspects of our lives - our work, our personal lives, our style of management, and so on. However, most of us are also unhappy and dissatisfied with our lives.

No matter who you are - an employer, an employee, or even a parent - you can greatly benefit from switching your mentality to that of Type I, where you gain satisfaction from the task itself, instead of from what it promises.

Equip your children with the skills they need to grow into curious, self-directed adults who lead satisfying lives.
Raising children