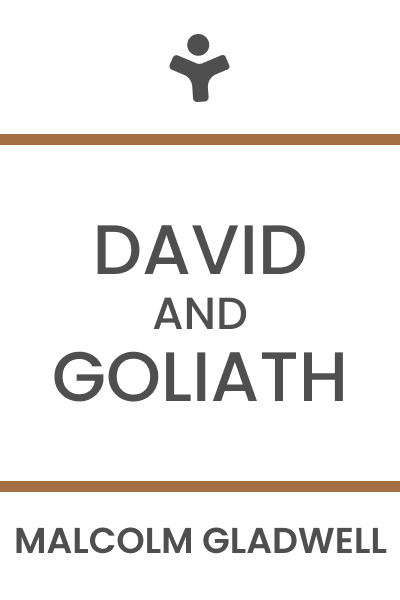 David and Goliath: Underdogs, Misfits, and the Art of Battling Giants

Malcolm Gladwell examines the surprising and complex ways that the small can compete with the giant, the weak can overcome the strong, and how our goals—which are frequently influenced by culture—can significantly impact how successful we ultimately feel. David and Goliath is probably Malcolm Gladwell's most useful and provocative book to date, drawing on examples from the fields of business, sports, culture, cutting-edge psychology, and a variety of unforgettable characters from around the world.

The Advantages of Disadvantages

What happens in conflicts between strong and weak when the weaker side declines to engage the way its opponent wants? The weaker has a higher chance of winning in those circumstances. The story of David and Goliath—that the small can defeat the big—has had a lasting emotional impact over the years because we tend to view underdog victories as unbelievable events. But underdogs consistently win.

Having a large army, many weapons, and resources gives you an advantage in battle. However, it immobilizes you and puts you on the defensive. Meanwhile, having fewer of those allows you to gain the advantage and strike—through movement, endurance, individual intelligence, country knowledge, and courage.

There are advantages related to having material resources and those related to not. Underdogs frequently prevail because the latter is occasionally just as advantageous as the former.

“[...] what we think of as an advantage and as a disadvantage is not always correct, [..] we mix the categories up.”

The idea that more is not always better serves as a valuable guide for how we should think about the connection between many things, for example, parenting and finances. If you don't make enough money, being a good parent is challenging. Also, being poor is demanding and stressful. However, no one would ever claim that having more money makes you a better parent.

We frequently fall into the same trap that wealthy individuals, wealthy organizations, and wealthy nations do: we assume that the advantages of having money always translate into benefits in the real world. Of course, they don't. Being larger and more powerful than your competitor is good but being so big and powerful that you are an easy target is not.

Due to his size, Goliath was unable to obtain what he desired. A too wealthy parent cannot be the father or mother he or she wants to be. An overly undersized class isn’t always the best option. We all think getting bigger, stronger, and wealthier is always for the best.

We live in an inverted U-shape world. That means everything has three sides—of whom only one is beneficial. A classroom can have too many or too few students, but neither is good. Similarly, a parent can also be incredibly rich or poor, but neither is good too. These are always the outer and disadvantageous sides of the curve. We must find the middle: to have just enough of something.

The Curse of High Standards

“[...] there are times and places where it is better to be a Big Fish in a Little Pond than a Little Fish in a Big Pond, where the apparent disadvantage of being an outsider in a marginal world turns out not to be a disadvantage at all.”

We form our impressions locally by comparing ourselves to people "in the same boat as ourselves," rather than globally, by placing ourselves in the broadest possible context.

We judge ourselves against those who share our circumstances. For instance, students attending elite schools will have to face pressures that they would not face in a less competitive setting. Because of the stark contrast created by the smiling faces all around them, people in happy countries commit suicide at higher rates than people in unhappy countries.

What do "great" school students think when they see the brilliant students around them? The Big Fish-Little Pond Effect is the name given to the phenomenon of relative deprivation as it relates to education.

Parents advise their kids to enroll in the best schools because these institutions will give them the freedom to pursue their interests. Similar to assuming that a smaller class is always better, we also assume that the Big Pond widens opportunities.

In our minds, we have a definition of what an advantage is, but it is incorrect. What follows as a result, then? It implies that we are fallible and that our interpretation of conflicts between giants and underdogs was flawed. It means that we frequently underestimate how much freedom can exist in what appears to be a setback. The Little Pond maximizes your opportunities to do whatever you want.

The Theory of Desirable Difficulty

According to conventional wisdom, a disadvantage should be avoided because it causes you to experience a setback or difficulty that makes your situation worse than it otherwise would. However, it isn't always the case. Desirable difficulties are real things.

Most of us naturally gravitate toward our strengths. The child who learns to read quickly continues to read more, improves their reading skills, and eventually works in a field that requires a lot of reading.

Capitalization learning is the process by which we improve at something by leveraging our innate talents. However, desirable challenges follow the opposite logic. The majority of our learning is capitalization-based. It is simple and clear. It doesn't take much to convince you to join a choir if you have a lovely voice and perfect pitch. On the other hand, compensation learning is extremely challenging. You must get over your insecurity and shame to succeed.

Most people with severe disabilities are unable to master all of those procedures. But those who can are in a better position than they otherwise would have been. Learning that comes from necessity is invariably more effective than learning that comes naturally.

“The right question is whether we as a society need people who have emerged from some kind of trauma—and the answer is that we plainly do.”

The concept of desirable difficulty implies that not all challenges are bad. Poor reading skills are a real barrier unless they enable you to become an exceptional listener or if they inspire you to take risks, you would not have taken otherwise.

The same traumatic event may have profound negative effects on one group while having positive effects on another, having two entirely different effects on individuals. Too often, we make the same mistake as the British—when they assumed that the German bombs during the Second World War would create panic in London and believed there was only one possible response to a terrible or traumatic event. In reality, there are two; it can traumatize us, or we can grow from it.

When things get tough, having courage does not automatically make you brave. After going through difficult times and realizing they weren't all that difficult, courage is what you earn. Germans bombed London because they believed Blitz's trauma would drain the British people's courage. But it had the opposite effect.

The Limits of Power

“I returned and saw under the sun, that the race is not to the swift, nor the battle to the strong, neither yet bread to the wise, nor yet riches to men of understanding, nor yet favor to men of skill; but time and chance happeneth to them all.”

It matters how those in positions of authority behave when they want the rest of us to follow suit. There are three principles of legitimacy.

First, those who are expected to submit to authority need to feel they have a voice and can be heard if they speak up. Second, the law also needs to be predictable. There must be a reasonable expectation that future laws will be similar to those of the present. Third, the authority must be impartial. It cannot apply different standards to different groups.

When one man’s daughter was killed, he felt that raising the penalties for criminals would result in fewer crimes. As most California voters chose to increase the penalties, he believed “more” was better.  But, just as there is a significant difference between a class of forty students and a class of twenty-five, there is a significant difference between having no penalties for breaking the law and having some penalties. Having more penalties is not always the better.

Learning the boundaries of power is challenging. It necessitates that those in positions of power recognize that their perceived greatest advantage—the ability to search homes, make as many arrests, and keep people in jail for however long they want—has real limitations. It is the same when you have to choose between a very good school and a very, very good one—it is important to recognize the limitations of your advantages.

Forgive those you have to
Growth