The other day I was on Twitter and I saw people once again coming down on influencers for taking on marketing campaigns for the sake of getting paid even though there is little to no synergy between what they’re about and the brands in question. COVID-19 forced a lot of people to lose their source of incomes and I guess people just felt that they had to make income regardless of what it took. These days an influencer could promote Nike this week and then do Addidas the following week all because of money. Everyone has bills to pay and it really got me thinking about the power of money when it comes to decision making.

We look at pornstars, strippers and sex workers and judge them for the professions they have chosen but this is what some people have to do to get by even though there are some who chose such professions because they genuinely wanted to but most choose them out of desperation and as a way to make a lot of money quickly. This once again speaks to the power of money to force people to do things they don’t want to do. This also can be extended to people who work dead-end jobs they hate for that monthly paycheck. Regardless of how you look at it money has power over your decision making process.

I learnt in the book “Tools of Titans,” that Arnold Schwarzenegger (I also learnt to spell his surname today) was actually a millionaire real estate investor before he made it big in Hollywood movies. A lot of people don't know this about Arnie. This was fascinating to me because the world always focuses so much on the larger than life actor when his big break only came in 1982 with the role ‘Conan the Barbarian,” but the back story to this is that he didn’t rely on movie making to make his living.

He was quoted saying: “That was my intention, because I saw over the years, the people that worked out in the gym and that I met in the acting classes, they were all very vulnerable because they didn’t have any money, and they had to take anything that was offered to them because that was their living. I didn’t want to get into that situation.”

So he turned to real estate in the 1970s with proceeds from his bodybuilding. This allows him to buy property and flip them to a point where he made his first million in real estate. This allowed him to have the clarity to make better decisions I will highlight in point 3 below.

2. Side hustle VS Main Hustle

I’ve heard alot of people who have jobs talk about their jobs being their main hustle and their dreams being their side hustle. I’ve also learnt in life that there power of life and death is in the tongue. The most dangerous thing you can ever say to yourself are words that physically bind your actions. In the story of Arnie above, even though he made way more money from real estate than he did his acting initially, he still saw acting as his main hustle and everything else as his side hustles, regardless of how much money they made.
YOUR MAIN HUSTLE IS NOT WHAT MAKES YOU MORE MONEY, BUT WHAT TAKES UP A MAJORITY OF YOUR THINKING AND THUS WHAT YOU WILL BUILD YOUR ENTIRE LIFE AROUND!

Always remember this point because you will find that your main hustle will often take the most time to pay you the amount you need/want but it’s important that you ALWAYS see and call the dreams you hold as your main hustle psychologically because that makes all the difference.

3. Say yes to everything then say NO!

The main reason that I say wealth or having money helps you make better decisions is that it gives you the ability to say “no.” The ability to say no comes from having a certain level of privilege that I now understand. We associate money with the things that it can buy and so on but what tremendously helped Arnie wasn’t the fact that he was a millionaire that could buy things but more of the fact that having the million allowed him to not be desperate enough to take every acting gig that came his way. Instead he could focus on his craft, hire the best help and say “yes” to the gigs he truly wanted that would open up the doors he wanted. In Arnies case, as stated before, Conan fell on his lap and that is what catapulted him to stardom.

I would argue that most girls who come from well off homes do not end up as sex workers unless they do it for a thrill or to upset controlling parents. I would also argue that kids who have trust funds don’t settle for jobs that they hate because the trust funds are always their exit strategy. I didn't have to worry about my college/university fees because my parents could pay this which meant I didn’t have to work odd jobs to pay my tuition and also didn’t have to purchase my own car. My parents and friends helped me with expenses when I was getting my businesses up and running which also meant I didn’t have to work for anyone.

The main point here is that money is not just a tool we can use to buy things with but a tool that can give us the patience, peace and the freedom to make decisions that are truly in line with us in such a way that we can add momentum to the things that truly matter to us. The impact of your life will always come from where you’re able to consistently act in such a way that your actions compound over time.

I don’t know where you find yourself today, but given that this is my last article of 2020, do make it a point to look at money as I have said going forward into 2021. Do the things you have to, say yes to everything that comes your way, but make it a point to one day stop doing this so you can one day ONLY say yes to things you want and KNOW are authentic to you because you will only ever be effective when you’re authentic. 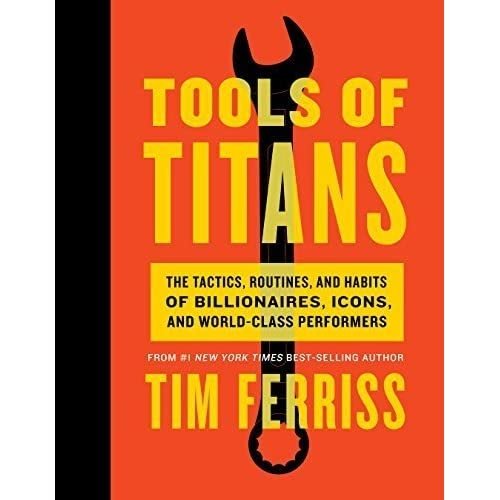 Follow us on Instagram at @Mentoristapp, tag us and let us know if this article helped you and download the Mentorist App for more information on how you can add action behind the ideas of other books as well as this amazing book - “Tools of Titans” By Tim Ferris.